I always wonder what people do when they are out walking their dogs at night. Last night, Pasiely and I went on a walk that started at the waning end of twilight, by the time we returned home it was fully dark. We passed one other set of walkers while out and I almost didn't see them until they were right next to us. Not cool, people, not cool.

As an avid runner, I've on occasion run during the night time hours and I have one MAJOR rule about being out at night that I wish more people would use: YOU MUST BE SEEN!!

Driving, I've almost hit bikers who think that the meager reflective lights on their bikers are enough. They are not enough. If you are going to a run, or bike, or dog walk when it might be dark the best thing you can wear is a reflective vest, at a minimum. This will reflect the light from the car headlights or street lights and allow you to be seen much earlier. No one wants to be hurt, or their dog to be hurt, because the driver didn't realize a person was there until it was too late.

When I run, I also wear a head lamp that lets me see where I'm placing my feet. My neighborhood is a mix of sidewalks and roads with wide shoulders (but no sidewalk). There are street lights, but often they don't cast enough light far enough for me to always see debris or holes that I could trip on. One of the races I ran at night, had the use of tail lights as an additional safety precaution. I think it's a great idea to be seen from the back as well as the front. Whatever gives you the advantage to be seen is super important.

On our walk last night, I wore my reflective vest, tail light and clipped a light onto Paisley's collar to allow her to be seen. It's one thing for a driver to realize there's a person walking along the side of the road, another for them to realize its me AND my furbaby. When I got home, I wish I would have also brought my head lamp because entering into my caul-de-sac is very dark dark.

I use the Nathan Streak Reflective Vest. I use Nathan Strobe Lights for my tail lights. They come in a few colors, cause I love colors. Also, they are really bright and have a clip on feature.

See the difference between the two photos below. The first photo is Paisley wearing her night light with the camera flash. The second photo is Paisley as she would be seen normally. While the light is pretty bright, I think I should probably pick her up a little reflective vest as well. 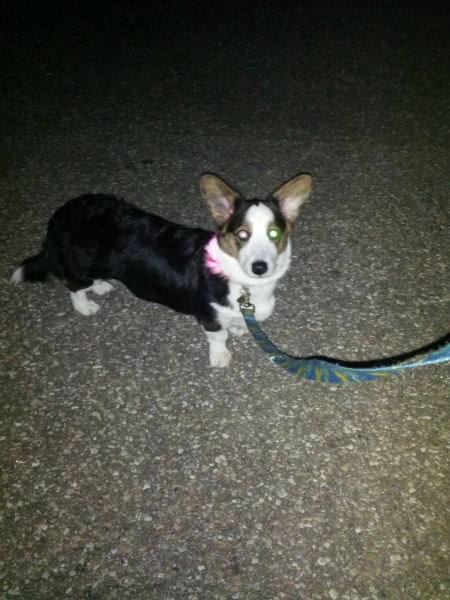 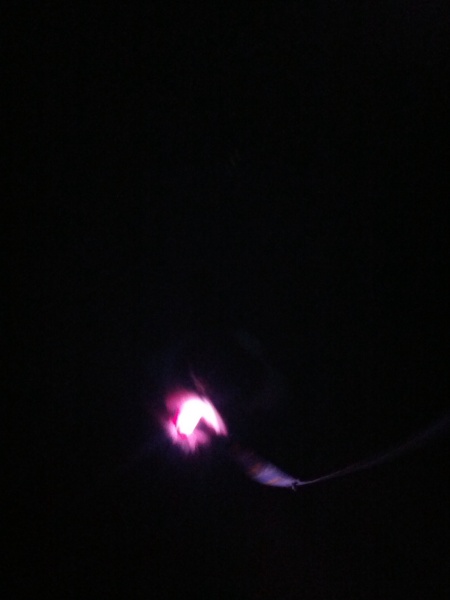 And twilight is when the coyotes come out. My beagle learned that the hard way.

I use a different strategy:  I never use a light, which destroys my night vision.  I've run at night for many years on familiar routes with enough ambient city light to see my footing.  All the artificial lights that runners wear now are actually a problem for me; they blind me.   I rely entirely on defensive behavior.  I know I am invisible.

Twilight is especially dangerous.  Pedestrians and bikers think there's plenty of light, forgetting that car drivers are blinded by their headlights and dirty windshields.

A headlamp is great for picking up dog exhaust.

I always carry a flashlight because there are so few street lights in my area. My own road has very little traffic so I use the light as much to see skunks and for picking up poop as for safety. I just remembered though that a neighbor was shot and quite seriously injured last year by a hunter who mistook her dog's tail for a white-tailed deer. I may have to get orange vests.

Feeling creative? I remember seeing these a while ago, and found a few again. Instructables.com  is a pretty entertaining site, even if you never make anything :)

http://www.instructables.com/id/Light-Up-Dog-Bandana/ - this one looks really easy, and seasonal.

I also found instructions for a super-soft alternative to an e-collar designed for a corgi! But that's another story.

Comment by Beth on October 30, 2013 at 3:03pm
Ours wear hunter orange vests with reflective strips; they double as safety vests for hiking in the woods.

Franklin has reflective attachments on his collar. We don't walk at night but its nice to have anyway. I wear my Navy sweatshirt which has reflective lettering so its really visible. Here is a good site for dog vets, leashes, and collars:

I do have reflective tape on the back of my name collars. I have found that the reflective collars usually peel off after awhile.

If you need to get reflective stuff, you can also pick up reflective tape or they make reflective spots you can iron onto clothing (or collars and leashes). I'm cheap, so I'm always looking for money savers. :)

I plan on having a reflective leash just for this reason!