I am currently looking to add a second corgi to my house and am finding it pretty much impossible to find a dog I can afford. I know corgis are expensive after buying my first one, but was hoping to rescue my second. The only rescue I can find in my area is a male. Has anybody had issues with 2 male corgis in the house? My breeder said absolutely don't do it because male corgis always fight. Franklin has always gotten along with every dog I have ever introduced him to and my parents and brother both have male dogs that he gets along with. Didn't know if it being a male corgi would mean he won't get along with it. I would obviously have them meet before making any decisions, but just wondering if I should take male corgis off the table all together.

Permalink Reply by Elizabeth on December 30, 2010 at 2:36pm
My two in tact (but not for long) male cardis have never had any issues.  They also do well with my dad's adult male Sheltie.  Of course, your success will hinge greatly on whether the new dog's temperament meshes well with Franklin's.  Testing the new dog on Franklin is a wonderful idea if you can do it.  Anyway, I wouldn't dismiss a male rescue just because he's male.  Good luck in your search - how exciting!

We have two boys and they are BEST friends - they have never had a fight...well besides over a bone once but I dont think that really had anything to do with sex! I have heard people say how did you do that? I never even thought about it and they are really best buds. Their personalites are different but are in complete sync with each other - you have to see the personality and if its a match, with a rescue that personality usually doesnt evolve until at least 1 month after adoption. Good Luck

Also , have them neutered :)

It really depends on the dogs.   Two girls are more likely to be a problem than two boys, in a general sense, but again it depends on the individual.  As a very broad guide, the most likely pairing to result in peaceful co-existence is one of each sex, and if adding a third the third should be the opposite sex of the more dominant dog.

But that's just speaking in generalities.  I'd be more inclined to try two neutered males than two intact girls, for instance.  My experience is girls can be moody with other dogs, while the boys tend to be more consistent, but again there are cranky males out there too.

Generally speaking, each sex has its own hierarchy, so two of the opposite sex are less likely to fight.  But if you have two happy-go-lucky males who are not overly concerned with status, it's not a problem.  Two of the same sex who find the same things important and are status-conscious will always be a problem.  If your guy is laid-back, then I'd try it.  Just be very honest first.  My boy is totally bomb-proof with other dogs outside the house. INSIDE the house his toy drive is incredibly high and he tends to hoard all the toys and does not take kindly to someone else trying to get a new toy.  If I were to add another male, it would need to be one that is much less drivey.

LOL, after looking through about 100 pages, I finally found the couple of discussions I remembered reading about this issue!  They both have lots of great opinions.  I personally have a male and can't wait to get another male.  All of my past female dogs (and cats) had attitudes, while my boys have always been pretty easy going.  Its definitely a personality thing, but I would way rather have 2 males than anything else.  Anyway, here are the 2 discussions I was trying to find for you, as well as a 3rd discussion about getting a 2nd corgi that you might find interesting!

Permalink Reply by Melissa and Franklin! on December 31, 2010 at 2:52pm
chris, I totally agree I just love males. I have had 3 females now and they do have a lot more attitude and are much less openly affectionate than the males I've had. Granted they always cuddled with me but were less willing to share the love with anybody other than their owners. Not so goofey and happy go lucky as my boys have been. Thanks for the links!

Permalink Reply by Zach and Lisa on December 30, 2010 at 11:01pm
We have two boys and they are inseparable! They are both neutered and Midas is super sweet and laid back, Dozer is wild and pretty submissive when is comes to strange dogs. I would think as long as both aren't dominant all would be good.

Permalink Reply by Nicola Porter on December 31, 2010 at 9:15am
I have two male corgis and another male dog. There is not much of a problem.

We have 3 male cardi's.  One neutered, 10 1/2 yrs, 1 intact 1 yo, and 1 intact 6 mos.  The younger ones are half brothers.  They all get along great.  We have had a couple instances of food possessiveness and they've gotten a little overly excited tugging on toys and we've had to break up the play fighting.  But I think part of it's just puppiness and they'll grow out of it--they're figuring out boundaries.

For what it's worth, we had considered a female as our third dog and the breeder said that males in this breed are much sweeter and cuddlier than females.  So, we went with all boys.  At some point I guess we'll try another breed lol.

Permalink Reply by Michael Mirabile on December 31, 2010 at 10:29pm
This is my second set of male corgis.  Now both sets have been brothers and yes they do 'fight', but it is more in play.   When they get going, they sound like little wolverines, but it is harmless.  They never hurt each other.  They were neutered recently so I expect them to calm down just a bit! 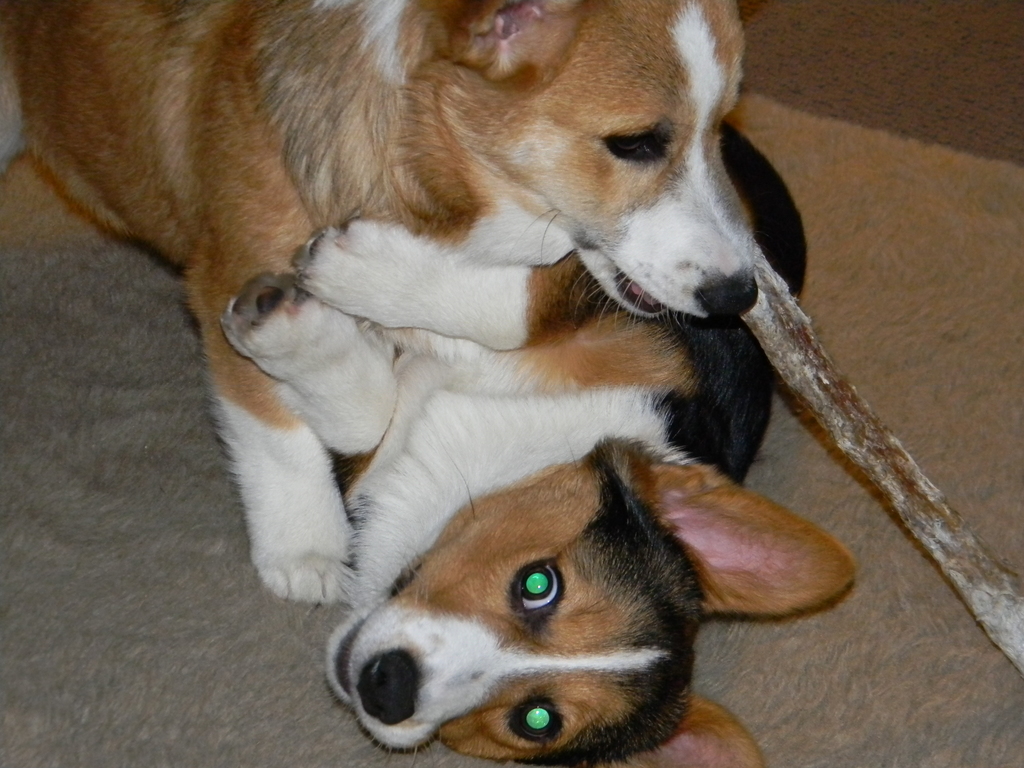 I have THREE males and never had a fight...but they do sound like wolverines!  I love that and will now use it to describe the amazing noise the three boys can generate.  Sam's info on how to introduce dogs is really great, too. Lately, I"ve been taking one of the boys on rides and walks alone so that they can learn to get along without each other a bit.  The youngest --just 11 months old-- has been pretty nevous without the older 2 but is much better now after some adventures on his one with me. The three are very, very bonded to one another but also give the humans a lot of attention.

Yes! Wolverines! That is what my boys sound like when they play. They also stand on their hind legs and grapple too. It's adorable.

I agree with the wolverine noises! I was worried about getting a second male too, but it's worked out fine so far for us. They have an occasional squabble over a bone or a toy but never anything serious. As long as you don't end up with two very dominant dogs I don't think you'll have too much trouble.

P.S. get a cardigan! haha