We had an upsetting thing happen today. My dad brought his 13-yr-old Schnauzer over for our Easter dinner. Cody (who is a 3 1/2-yr-old male) has never been fond of her. He tends to get bossy and has shown his teeth when she's around. It's very embarrassing. He is not real big on other dogs but he's been socialized and goes on trips with us, dog parks, walks, etc. Cody is the best dog I've ever had. He is loyal, friendly, and I love him so much! Today, however, he growled at Greta when I was sitting by her. Then and jumped in her face. He didn't touch her but acted like he was going to tear her apart. It was awful. I hollered at him and got him away from her and then he snarled at me! It hurt my feelings so bad I bawled. It took him about a minute to calm down before he acted normal. It's like he lost his mind for a minute. I know he was being jealous, but is this something that should worry me? Please help. It's never ever happened like this before. He's a normally SWEET boy.

If he was going to bite this dog, or you, he would have, right then and there. It sounds like Cody dislikes the schnauzer, possibly for some doggy reason inscrutable to humans. It may be "jealousy" (quote marks because IMHO it's tricky or even invalid to equate human emotions with dog ones), protectiveness, or a dominance issue. If he does not perceive Greta as part of his immediate group (which may be just you and him), he may not like seeing you get too close to her (or vice versa, in his mind: her getting to close to you). Or seeing her sitting next to you, especially if you're petting her or loving her up, may disrupt his instinctive sense of social hierarchy.

I'd probably keep him on a leash when the other dog was in the house. Never leave them alone together. Also it would be wise to chat with your vet about this episode -- she or he may have some insight that would help.

Permalink Reply by Kathleen Unsell & CODY on April 6, 2015 at 2:10pm
Thank you so much for your input. I totally appreciate that. He is totally fine now. Also, I forgot to mention that our son's dog was here too. He likes Daisy, but with Greta here, it threw another dynamic into the situation. Maybe that was the boiling point?

There's good news and bad news.  The good new is that all you have written is perfectly normal, the bad news is that this is not going to change.....  Many dogs don't like other dogs. Yes, socialization to other dogs can be helpful in the puppy stage, but they just seem to be born that way, this is a matter mostly of genetics.  Obviously there is a range.  In the case you describe Cody accepts other dogs to some degree, but not in his home and not Greta!!!  It actually shows good restraint on his part: he made a furious ruckus, but did not actually hurt her, which he certainly could have done....   That may not be the case next time.  It is quite unfortunate that he growled at you, but your comment, that it looked like he lost his mind, is actually a good observation.  There are a host of hormonal and other chemical reactions that take place when anger kicks in (in people as well as animals) and confronting anyone really angry is always done at your risk.  Many dog owners have gotten bitten more or less seriously in trying to stop a dog fight.  So either keep Greta out of your home, or crate him when Greta comes over.

Do not just rely on having him in another room.  Any tine you have a dog that can be aggressive in a home situation, you should have two layers of protection. (Crate plus the closed door of a different room, for example) as things happen, especially in times of confusion and you do not want to take chances with aggression.  I would avoid the situation altogether.

My male Corgi is fine with other dogs, both coming up to us on our walks ( sometimes they are friendly, sometimes with stiff posture and raised hackles) or coming to our home with friends.  An exception which truly caught me unprepared was when my  daughter came over with her 7 month old Basenji female pup. Just like you described, I thought he was going to eat her up! It happened soooo fast and, thankfully he immediately stopped and came to me when I yelled.  Result, the Basenji no longer comes to our house!

Just because a mini-schnauzer or a corgi looks fairly small relative to a human does not mean they can't inflict some serious damage. A ripped tendon in an arm or a hand is not a joke! Once a real fight gets started, a chain of events kicks in that can be difficult to stop and dangerous to those who try to interfere.

On reading Anna's remarks, I have to agree with her: keep the pooches separated. That way, everyone all the way around will be happier, dogs and people.

Permalink Reply by Kathleen Unsell & CODY on April 6, 2015 at 2:14pm
Thank you, Anna, for your kind comments. You are right, it's probably normal and I was confronting high emotions at that moment. I know he wouldn't hurt me intentionally. EVER. He's been to a dog beach with hundreds of dogs, and he's the one that shys away. This was a jealousy/territorial thing, I'm sure. Thank you again. Made me feel much better. :)

Permalink Reply by Beth on April 6, 2015 at 10:51am
Agree with what has been said. However, it seems a bit unfair to crate Cody and let another dog have run of the house. I would suggest crating the other dog if she must come over. Ideal situation would be that Greta stays home when your dad visits.

The crating depends on how long it has to go on.  If Dad is just there for a 3 or 4 hours, it's one thing.  If Dad is staying over all day or overnight as a guest, then they would have to alternate being crated.  There are many  other solutions that can work, but the bottom line is that they need to be well thought out and fail-proof as dogs can easily take advantage of a moment of distraction, or confusion in the environment, etc.  Obviously, if Greta can stay in her own home, that's a no brainer.

Permalink Reply by Beth on April 6, 2015 at 12:08pm
I just wanted to add that I know you are upset, but dog disagreements can be very noisy and as has been said, if he wanted to hurt her, he would have. That does not change the fact that they should be separated, but please don't let the incident make you feel bad about your good boy.

My Jack is about as bombproof as possible with other dogs. He is absolutely trustworthy and frequently gets along even with dogs who don't usually like other dogs. Just the other day, a friendly but probably under-socialized bouncy dog on a leash wanted to say hi. Jack went up to him willingly and the other dog bounced at him (something Jack is used to). Not sure what happened-- I THINK the other dog slapped him in the face with a paw, though--- but Jack roared and snarled at him ferociously for several seconds. This was beyond a normal correction and much more noise than I've heard him make at another dog. We separated them. The other dog calmed down and Jack wanted to approach again. I trust Jack's judgment with other dogs. They sniffed, the other dog was much more polite, and they were ok though I would not leave those two unsupervised. Anyway, it was very noisy and teeth flashed and it startled everyone. But it happens. Even good dogs have bad days. Jack had already had the slightly disconcerting experience of seeing a baby who he has only known in a stroller toddle around on his own two feet a little while earlier, then spent some time with a brand new 12 week old puppy--- and he's not a fan of puppies--- so I think he'd had his limit of being patient and this other dog put him over the top, doing something that normally would have just resulted in a much more disciplined correction by Jack.

So don't feel bad and don't worry, but do manage the two dogs differently if they need to be together.

And Anna is right: if the other dog is there for many hours you'll need to rotate crating.

Permalink Reply by Kathleen Unsell & CODY on April 6, 2015 at 2:20pm
Thank you, Beth! Really appreciate your comments too. Looks like Cody is a normal Corgi kid. Just had too much going on in his house and he just doesn't like Greta too much. I was paying too much attention to her at the time. So much for them having a good "relationship!" Lol....

im glad to hear Baden is not the only one to make corrections like that. people assume hes being aggressive when he simply correcting the other rude dogs behavior

I dealt with a similar situation years ago with my first corgi, Sparty. My son had a doberman puppy and while she was still quite young my husband and I went out of town on a vacation and left our two Corgis with him. I showed him how to use dog gates to gives the corgis a break from the very large puppy. Unfortunately my son while being an animal lover was a total pushover when it came to management and ended up leaving them all on their own all the time. By the time we got back one corgi was limping and Sparty had decided that the dobie needed discipline.  Fortunately the dobie was pretty timid so all the fighting was from Sparty. Fast forward about 4 years and my son moved overseas and we suddenly had a 75 lb dog hated by my 25 lb one. I determined to make this work so first I leashed Sparty to me inside for a couple weeks. I never left them all loose at the same time unsupervised. Whenever Sparty got the "stare" I firmly said no, when he looked at me instead of her he got a treat. If she began to race around the house, I tethered her to a Bannister in the house until she calmed down. By identifying the things that made Sparty on guard such as her running etc. I was able to find a way towards peaceful existance. I fed her separately and if Sparty became jealous of my petting her or playing with her, I tethered him until we were done. Having a dog tethered or leashed go you gives you complete control of all situations. Over time I was able to redirect Sparty without the leash with a word and Misty learned to play while laying down with a toy instead of running in the house. They lived together pretty well for about 5 years before we had to let Sparty go at age 13 due to cancer. I don't think this would have worked if Misty had green aggressive. Sparty was a treble to see that not only did I get to decide who was in our house but also that I would protect him from activities that caused him to feel aggressive.  The leash can be a  powerful tool. You can train for this if you are committed but try to keep it as positive as you can. By the way I threw away the prong collar as it did not work and seemed cruel. 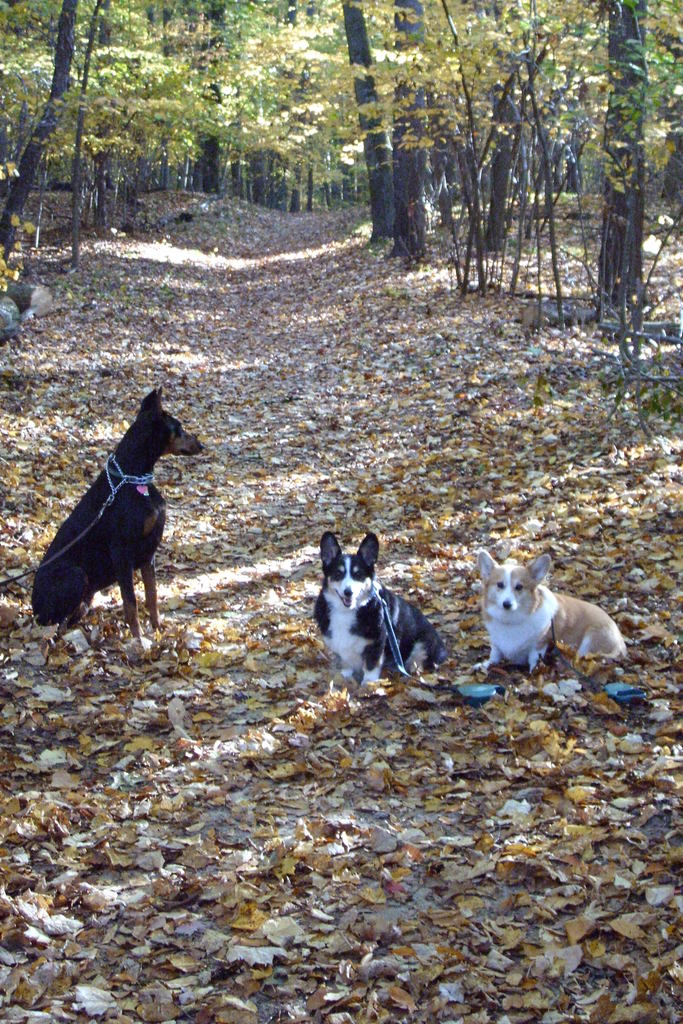