Broken foot on a crazy dog, how to deal?

So I've been through two broken feet with Franklin in the past but with a dog like Kirby its a whole different ball game. Franklin was content learning new tricks and playing with interactive toys as well as being drugged to keep him quiet and happy through his recovery. He was also splinted both times he broke his foot. Now I have Kirby, crazy as can be, no interest in interactive toys, and bound and determined to do anything and everything Franklin does. His vet did not splint his foot because of where the break is and her belief that splints cause more damage than a broke foot does (I totally agree after Frank almost lost his foot due to a poorly applied splint). I have been instructed to keep him quiet for 4 to 6 weeks.....yea right! She gave me some sedatives but they aren't doing anything for him. When I leave the house to walk Franklin, I can hear Kirby HOWLING at the top of his lungs from the moment I leave until I get back. Kirby is crated all day and free to roam at night but now his freedom at night is resulting in major destruction because he can't relieve ANY energy. Before it was minor destruction (a hole in the yard, a chewed up plant, etc), now I'm finding shredded pillows and stuff being pulled off bookshelves, etc like he did when he was loose in the past. In the mornings as I am getting up I can also here him jetting up and down the hallway running like a maniac (major no no). How do I deal with this? Am I going to have to crate him night and day? That just doesn't seem fair. He is already getting maximum dose of his sedatives. I don't know if I should just ask the vet to splint the foot so I can at least walk him? Today I put a sling on his leg which basically made him into a 3 legged dog and took him on a walk with Frank and I. This is only the start of day 4 and I am having all this trouble so I have no idea how I am going to last 4 to 6+ weeks! 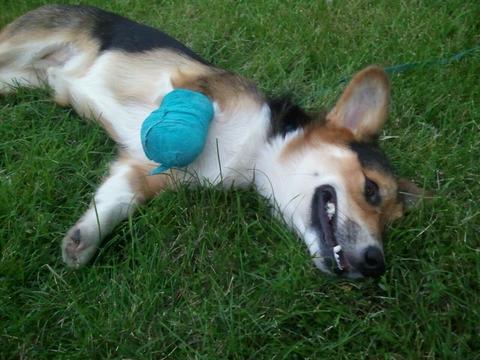 Maybe you can cone him.  Most dogs I know get all sluggish and slow with the cone on lol.  Meh... it's worth a shot. XD

lol that's a pretty good idea! At least maybe with a cone he will have a harder time reaching the pillows to chew them up!

I second the cone idea, Tomahawk loves to run and jump off couches so having the cone on him when he was neutered helped in keeping him off them.


Kirby looks like a maniac in that picture so I can only imagine what a handful he is in real life! Ay Kirby.

how did he break his foot?

I'm not even sure how it happened. I was out getting the mail and my friend walked up and he jumped on her and landed funny. I had my back towards the mailbox so didn't see what happened, but she said he jumped up and landed on his side. I don't know if he got tangled in the leash or fell off the lip of the sidewalk or what, all I know is after he yelped and when we went to palpate it he screamed and was limping after. I knew right away he broke it.

I've used Benadryl on Franklin when he broke his foot when he was a puppy and it made him CRAZY, I'm afraid to try it with Kirby since he is so crazy already. I might talk to a different vet on Wed when I'm back at work and see if he has any suggestions. I have been slinging his leg so he can't use it and taking him out but he can't go on hikes and long trips in a sling so I have to leave him alone at home and that's when he howls like a maniac.

I think the cone idea in the house might be a good idea. I swear, Melissa, you have had more than your share of problems with this little guy!

agreed! Lol. If I knew what i was getting into with him I would have just sucked it up and got a puppy! He is MUCH MUCH more trouble than a puppy would ever be! But on a good note when I sling one of his legs and he can only use 3 he is much more like a normal dog so I am finding myself not as frustrated at him all the time, I'm sure the sedatives help a bit too! The daily findings of destruction in my house aren't making me nearly as upset as they used to, maybe I'm just used to it by now....

Just a thought, but you say he can walk with the sling, just not go anywhere. I've known several three-legged dogs, and they do get around, even shortly after their surgery. Are you sure he can't go with you on three legs? Is there a way to tie up the leg more securely so you would feel more confident about him getting around with you?

I take him on short walks with the sling but he wouldn't be able to handle a hike. He gets tired on our walks in the mornings and will just stop and lay down, he wouldn't be able to handle hikes for several miles and swimming is completely out of the question. I also worry about leaving the sling on for more than 20-30 minutes because I have to make it really tight to stay on his stubby leg. I like to take daytrips on my days off and go hiking in Tahoe or other places in the Sierras and both dogs have a hard time rock climbing as it is.

I gave him the highest dose allowed of his sedative when I left today and covered the front of his crate with a light sheet so he couldn't see me leave with Franklin and I think he did ok today. I didn't hear him howling when I left so that's a good sign I think. I still feel bad leaving him :-( I''m going to talk to his vet when she is back on Friday and also a different vet tomorrow to see if he has any other ideas.