Cat scratched Jack in the eye With Update x 2

Update 09/11/12:  Just back from the vet.  Everything looks good.  The scratch appears healed, so his cone is off and no more eye drops.  He celebrated with a nice roll in the grass.

Help!  It's almost 11:30 at night on a work night.  We were getting ready for bed.  Jack was lying on the tile at the foot of the stairs, literally with his chin on the ground minding his own business, when the cat apparently went up and scratched him in the face for no reason.  He yipped and chased her away a bit, then started face-diving in the carpet.  He was squinting one eye.

I got some treats and some good light and had him move his eyes for me and he seems to have a small spot of bright red (blood, presumably) on the white of his eye, right where it joins the colored bit.

Emergency?  Call the vet during normal hours?  Watch it and see what happens?  I know one dog here lost an eye over a scratch, but I believe that was a corneal one.

I swear that cat will be out on her head.  She's a bully who routinely swats the dogs for no reason, though it's usually Maddie and not Jack.  Jack NEVER once has harassed the cat.  I'm presuming Her Majesty was annoyed about something else and took it out on him.   But this is the first time she's used her claws that I can tell.

:-(      I am NOT happy.   Her Ladyship just got locked in the room that has her water dish and litter box.

Jack is no longer face-diving or squinting, and he can move the eye normally.  Just not sure what to do.

Jack's eye looks pretty good.  The pupil was dilated with drops, so that looks odd, but while you can still see the scratch, so far no heavy discharge or bright red areas that are spreading.

The cone, ah the cone!  Last night was a long night because he just stood in the kitchen and barked for awhile, but he's getting used to it now.  He won't move much around the house unless someone goes with him; he's bumped into Maddie or furniture or us so many times he just waits for someone to tell him it's ok.  He did actually chase his large Jolly Ball a few times (his idea) and managed to pick it up while wearing the cone.  And he's lying down with it on.  He needs it off to eat (he cannot reach his dish with it on).   And he still won't potty with it on, so we take it off a couple times outside so he has a chance to go.

A friend at work gave me a brilliant idea for walks:  loop a string through the little hole on top of the cone (or put a hole there) and hold the cone up while the dog walks. It keeps him from hitting it on the ground.  That and a few treats helped us walk two blocks tonight, which made Jack a happy pup! 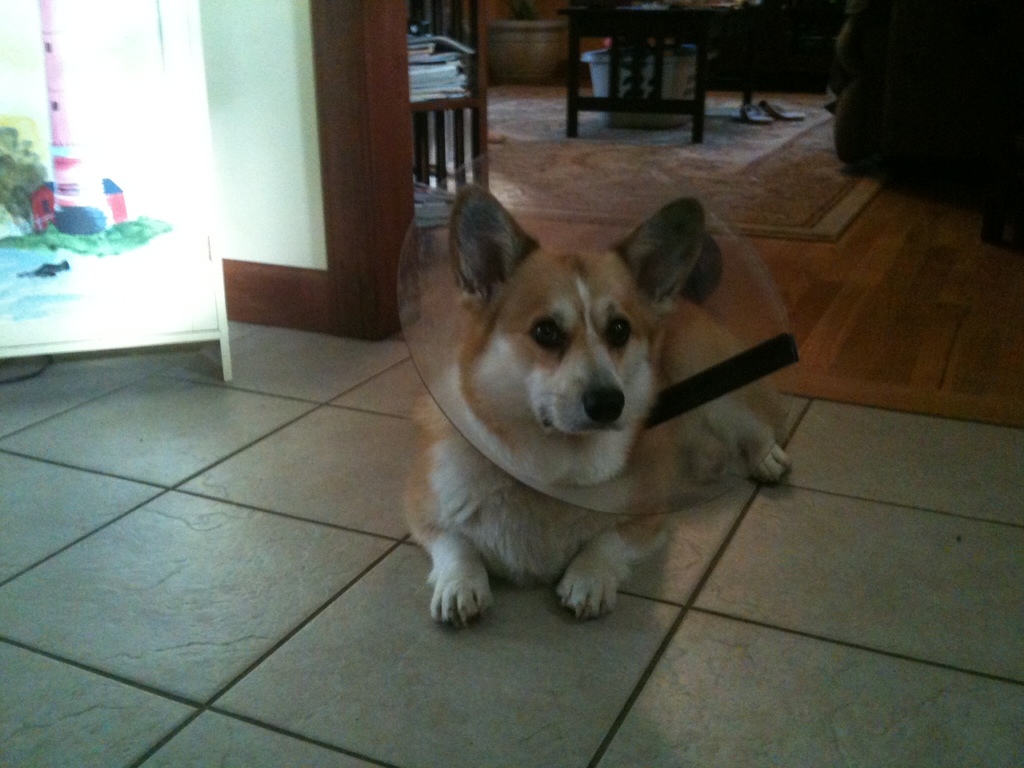 How's Jack doing...the picture really makes me feel sorry for him. Is he getting good treats for looking so sad???

Permalink Reply by Beth on September 11, 2012 at 10:19am
Jane, he's coping surprisingly well but he's been very cuddly which is not like him at all. He has a vet check today so I'm hoping that he's healed and we can stop the drops and take off the cone. I will keep you posted.

The vet said the eye looks good, so the cone is off!  Hooray!

Bless his heart, I am happy and thankful that it has healed!!!