I grew up with cats-- Oscar is my first dog. He will be seven months old next week and I consider him one of the best decisions I've ever made. Turns out I'm much more of a "dog person" than I could ever have imagined. That being said, sometimes I miss having a cat around.

My husband and I are considering adding a cat to the family at some point, but Oscar's health and happiness are our top priority, of course. Is it crazy to hope that I can find a cat who will not just tolerate, but enjoy living with Oscar? I would want them to (eventually) be friends, not just roommates. Should I look for a kitten to grow up alongside our rambunctious pup, or would a mellow older cat be a better choice? There are a couple fantastic local cat rescue groups who have cats and kittens of all shapes and sizes looking for loving homes.

If you go for an older cat look for one that is use to dogs.  Tho with the young age of your corgi then maybe an older kitten..teenager so to speak..would be good.  Puppies are rambunctious and a small kitten might get hurt.  Again, look for one that has been around dogs.  An instant bonding is too much to hope for but eventually they should become friends.  Many rescues who foster their cats will place it in a home that has kids, dogs and other cats so they become accepting of them when they go to a new home.

When they meet, don't push the meeting...let them find their own way to each other.  Keep an eye on the dog so it doesn't try to use the cat as a squeak toy.  Be prepared for the "chase".  Oscar will try to "herd" the cat..corgis don't know you can't herd cats but he will try.  My cats will often initiate the chase, get the dogs going and then jump up on say the dinning room table and laugh like hell watching the dogs run circles around the table trying to find the cat.  Those felines can be such a tease.

I have added cats/dogs all different ways  with no problems. However, I do not allow the dog to chase the cat even if the dog has to drag a leash for a while so I can grab them. Currently I have two rescue cats that were unused to dogs but both of my dogs grew up with cats. They all get along great. In the past i have had combinations that really are bonded (grooming each other etc) and it is so cute but I don't think you can force that. I think it really depends on how consistant you are with training your corgi to not overwhelm the cat or kitten.

This kitten found us...as long as the cat has a "safe" haven and Oscar knows the word "leave it" things should be fine with the right cat. I've had kittens before and they have always done well with my dogs. 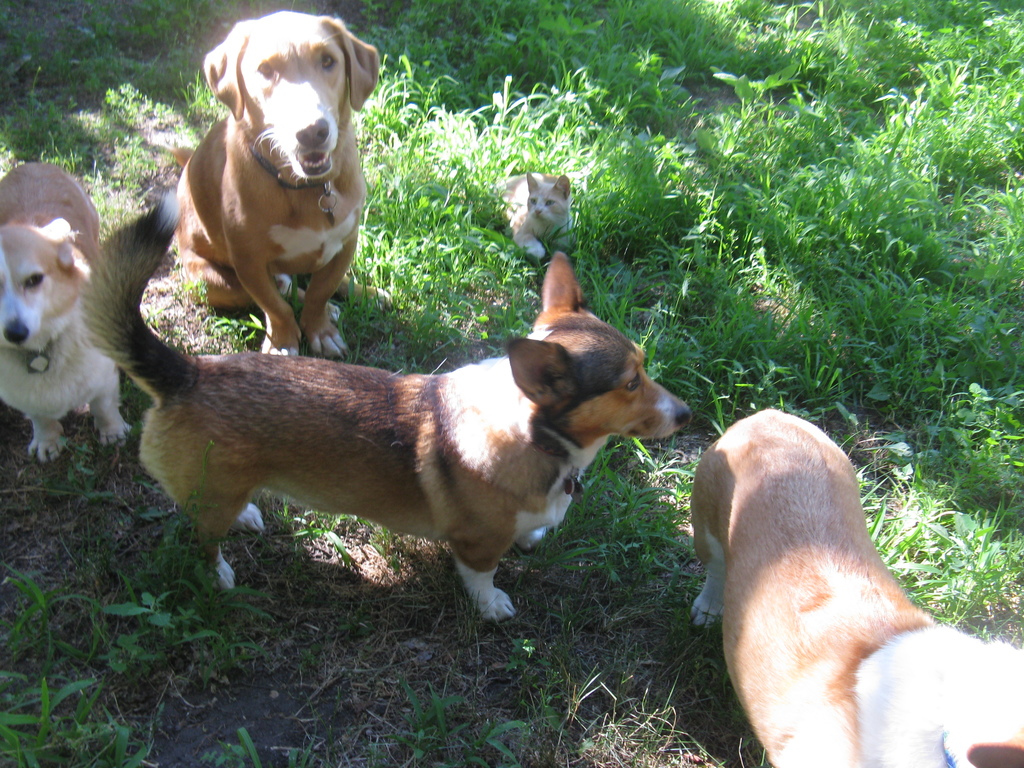 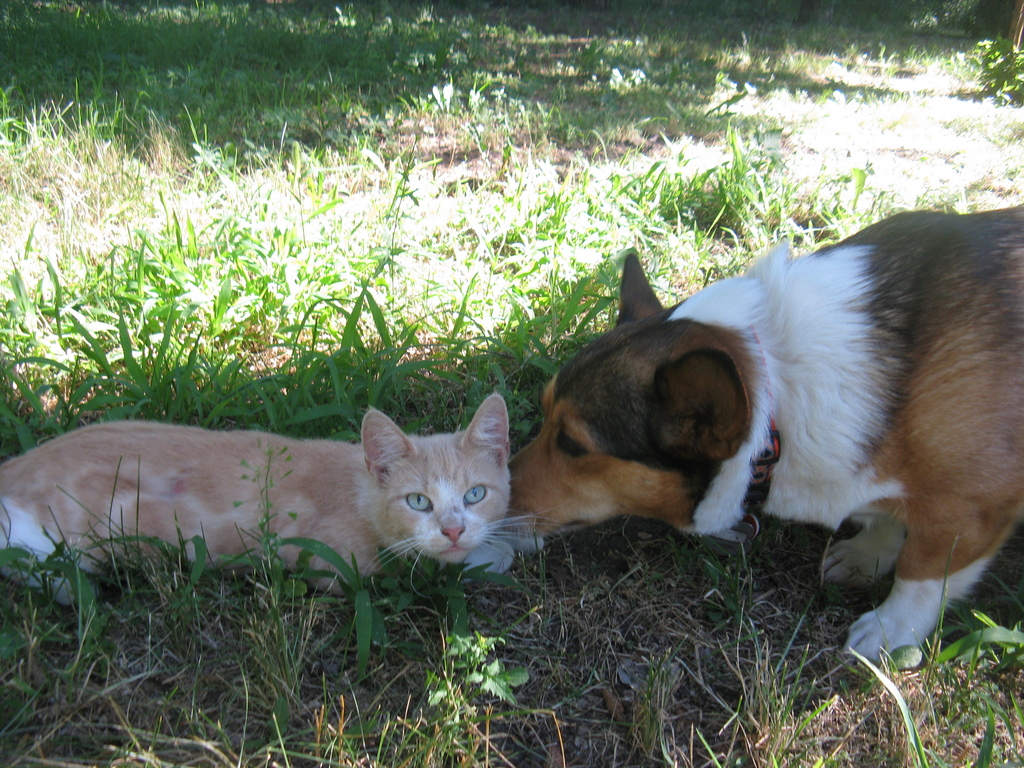 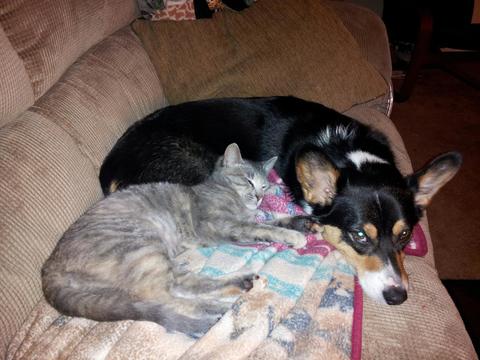 I would probably go for a younger cat/kitten. However I have met many adult cats who love dogs of any shape and size so it would really just depend on the cat. The kitten in the picture above was about 5 months old when I adopted her. She is a pretty adaptable little cat and she HATED Franklin for the firsts week or so I had her but now they are best friends. With cats the most important thing is time. But if you want them to be best buddies I would look for a cat that either is great with dogs already or a young kitten so they can grow up as best buddies. I love having a rambunctious kitten around to keep Franklin busy :-)

Definitely get a kitten. Oscar is still young enough that they will grow up together and most likely be buddies. We had cats first, and then got Ein as an adult. The cats were totally freaked, even though Ein is pretty gentle with them and leaves them alone for the most part. They coexist peacefully, but definitely aren't friends.

Jane...that is an adorable gang of critters you have there!

Yup, cats put themselves out of reach of the dog and leave it works as well for cats as anything you wouldn't want the dog to have.   Now if I could only get leave it to work when they are chasing squirrels.

I pretty much think that kitties and corgi's were made for each other. We had two cats in our house already and they are spoiled rotten and run the place. They let Murray know where he was in the standings and he feared them at first (he also fears wind, flags, shadows, the dark, etc) and that let the cats kinda decide when they interact. They are all total besties now. They play, chase and box each other and when they are done, they just leap away where short legs can't go.  I think it helps that my cats have a super personality. They are birmans and think they are dogs sometimes anyway.

Permalink Reply by Elizabeth Kate Rosen on July 19, 2013 at 3:25pm
Thank you! I'm glad to hear there are some great corgi-cat friendships out there. There will be a bunch of rescued cats from a local shelter at the Petsmart here this weekend, maybe we'll go look for a new friend for Oscar there.

Becca had never been exposed to cats when I brought her home as an 8 month old. My cat, Mokey, LOVES dogs. Before Becca came home I set up cat only zones in the house using gates. I also set up high point for Mokey in each room. It took some work and training, but Becca and Mokey peacefully coexist. They are not the best friends Mokey and my last dog were, but it works.

I agree with some of the others. A teenage kitten would be a good choice, old enough to not be fragile, yet young enough to be adaptable and play. Set them up for success, and don't forget to dog proof the litter box.

Elizabeth....I know the cats at out PetSmart are all socialized to be with dogs and other cats.  Good luck!  And remember we will need pictures.

Of all the cats and dogs I've had together the best was our female Irish Wolfhound and a male tiger cat. Picture a 115 lb dog and a cat that was all of 10 lbs soaking wet wrestling.  Visitors would see them together and be terrified the dog was going to kill the cat.  Tigger could get away anytime he wanted and always went back for more.  They slept together, ate together.  Now the same 115 lb dog was scared to death of a 7 lb cat and would rather die of thirst then go near that cat if she was sitting next to the water bowl.

We had Sam before we got Tasha the dog.  We brought Tasha into the house as a 6 month old puppy.  Mind you a 6 month Irish Wolfhound puppy is the size of a full grown GSD.  Tasha went up to Sam who was not going to tolerate this intruder.  Sam stood up on her hind legs and boxed the dog's nose.  Tasha turned and ran...right into the full length mirrored hall door.  So not only was Tasha being pursued by the Cat From Hell there was this other huge dog who looked liked it was going to attack.

Tasha had 3 totally different relationships with 3 cats all at the same time.  One she thought of as her puppy, one she was terrified of and one where they both pretended the other didn't exist.