Corgis in 'The King's Speech'

I'm naively hoping that the appeareance in The King's Speech of two, healthy looking, good tempered Corgis, will go some way to a revival in the UK of what is an endangered breed. I find there is still a view that they are fat, grumpy lapdogs, which I'm afraid some of the Queen's dog have been/are! When I tell dog walkers that they are one of the oldest working breeds in Britain, they are very surprised. Anyway, I'll keep waving the Corgi flag.

Permalink Reply by Denise Hawkins on February 28, 2011 at 5:39am
I think it very sad, that the most famous Corgi's in the world belong to her and she is not a great advertisement for them.  Hers are known to be snappy, overweight and totally non disciplined...all the wrong things for this wonderful dogs to be!

So many folks have such misconceptions about corgis....  When they see my big (short, yes, but still big dogs!) cardis, they are so suprised they are corgis.  One is a certified therapy dog, one loves to herd the goats next door and the third is sort of the momdog to everyone.

Well.....thankfully the corgis in Kings Speech are good ambassadors for the breed.  Colin Firth and corgis....oh my oh my!

Permalink Reply by Kari & Quin on February 28, 2011 at 10:54am
Ya know what? I am kinda glad that they aren't any more popular then they are. Look what happens when a dog is featured in a Disney Movie. About a year later we end up with a bunch of poorly breed (AKC) supposedly dogs in the shelterers that have all kinds of genetically passed down problems. Or just good dogs that were purchased by people that don't understand what they are getting into when they get a dog let alone a corgi, and just because it was cute and well behaved on the movie they think Oh let's get one, and then they get the puppy home and it becomes A REAL dog. I hope that doesn't happen with this movie. I for one am GLAD I have to explain what kind of dog I have and why it has no tail and that it is a "Pembroke" Welsh Corgi and that the other one is a "Cardigan" Welsh Corgi and that yes they are both Welsh Corgis:) and no she isn't mixed with a shelty she is a fluff, and yes she is a purebred from show lines. But then again I enjoy being different and weird I am an artist:) been that way all my life:)

I agree that being over-popular is a problem, but Corgis are quite rare in the UK.   Too rare.

According to the Kennel Club, there were only 533 PWC's registered in the UK in the year 2006 (that would be new registrations) compared to over 45,000 labrador retrievers.  If you figure roughly 7 per litter (some bigger, some smaller) that would be about 75 litters.  Since many breeders have more than one litter, you probably only have about 50 or 60 breeders in the whole country.

Cardigans are even worse off with only 84 registrations.  That's, like, 12 litters is all of the UK!

Each Disney "101 Dalmatians" release was followed within a couple years by a spike of abandoned Dalmatians in shelters.

"The King's Speech" is a fine film.  Firth did an amazing job.

Take a moment to reflect upon the magnitude of that time.  Hitler got where he was solely through his gift of demagoguery, perhaps the only thing he did well, besides hate.

Permalink Reply by Laura Jones on February 28, 2011 at 11:06am
I was surprised to read an article the other day that the "first dog" of California is a corgi!  I haven't seen the King's Speech yet but I am always happy to see a corgi on the screen.

Permalink Reply by Rachael & Waffle on February 28, 2011 at 11:16am
It's an AMAZING movie and won best picture at the Oscars last night.  One of the corgis even has a speaking part! (Probably unintentional, but whatever.)

Permalink Reply by Gilly & 'Fox' on February 28, 2011 at 1:16pm
I know...it made the whole of our little cinema here in Cheltenham, Gloucestershire, laugh out loud, as it happened at such a crucial moment in the story, supporting the old film adage "never work with children or animals"!  I think Colin Firth improvised his next line when he referred to the dog. Great film....simply made...well acted, filmed, directed and a beautifully economical script. They wanted to make the film years ago, but apparently the Queen Mother said "Not whilst I'm alive" ! 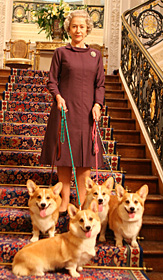