Do you believe that dogs see things we don't?

I am an avarage Christian and live pretty regular life and don't really believe or pay attention to what might be out there.

Well this morning I was cuddling my pups and something really caught there attention. They fallowed something on the sealing and wouldn't take there eyes off it. I turned on all the lights trying to see if maybe there was a spider but I couldn't not see anything. They kept moving there eye like whatever this was is moving and they were so fixed on whatever this was.

Hmmm thought I would get your guys opinion and maybe experiences. Like I said I'm not really a believer or payed much attention to things like this.

I'm convinced of it. We had a sheltie who one day, stood on top of the small stairway had her eyes dead locked on my parents bedroom door way and was on high alert. She was bearing her teeth growling and barking and I was getting so freaked out. No matter what I said or did she wouldn't stop. When I walked passed her to go to my parent room she got really anxious but then relaxed. Around that time some messed up stuff was going on in our house too.
My friend had a dog who could be anywhere in the house, but if you opened the storage room door in the basement, the dog would come barreling down, go in and bark frantically at the same spot. That was super freaky, she even opened the door as silently as she could ( I couldn't hear anything) and the dog was on the other side of the house on the 2nd floor. We stood there without saying anything and within seconds the dog cam barreling down.

Permalink Reply by Elizabeth Throneberry on September 26, 2012 at 1:14pm
Gives me chills reading your story! Sammie and milo both dead locked on my wall and fallowed it up to my sealing as if something was crawling up.

My cats have done that as well on multiple occasions!
I caught Pilot doing it 2, the first time I saw the bug, the second time I examined the wall and couldn't see anything. The place we're living is over 100years old so... who knows haha!

Maybe, I think it is a good possibility. I have had WAY too many odd things happen that animals picked up on. My aunt lives on a decently old farm and since before she moved there, there has been a section of her barn, a loft, that was boarded up and over, no holes (none visible anyhow) and I used to have my birthday slumberparties out there in her huge stack of haybales. We ALWAYS took dogs out with us, Paris, a malamute wolf mix and McKenna, a lab mix. One of the nights I got that chilled feeling, you know, where you're hairs stick all up on end and whatnot outta nowhere and then less than a second later Paris was up snarling, looking twice his normal size with how puffed up he made himself and Mckenna had a low growl going and he and they were both staring up at that boarded off loft crazy intense. I about had a heart attack, because these are barn dogs with pretty docile temperaments, I'd never seen Paris go after any living creature or even bare his fangs at one other than the other dogs in play! Another thing is I have a friend who has two cats and her cats ALWAYS start purring randomly and acting like they're rubbing up against something (signature stretching their face for chin scratches, leaning to one side and slowly walking forward) even if there is nothing there. Now, maybe it could just be that they are acting strange, but it's just way too weird when you see it!!!

Aww the pups were protecting their kids! Lol. I would of needed to change my pants after if I had been you haha!

I also am a Christian, and I believe all of your comments. I believe God gave animals gifts, just as He has given us our own gifts <3 I know that He loves all His animals, as He does look out for the Sparrow :) I also believe in the supernatural as I have seen & felt many odd & wonderful things that could not be explained. Some good & some bad.

Permalink Reply by Elizabeth Throneberry on September 27, 2012 at 1:28pm
Ya I believe in lots I guess I'm open minded. The bible doesn't talk about dinasuares for instence but yet we still had them... There could be lots of things out there.

We have ghosts in our house. 3 generations admit it. I know our dogs see things alot, and I know our ghosts like to move stuff on us. They're friendly though. Dogs do see the other side. That's why when they feel the evil spirits, they usually hide or growl at nothing. 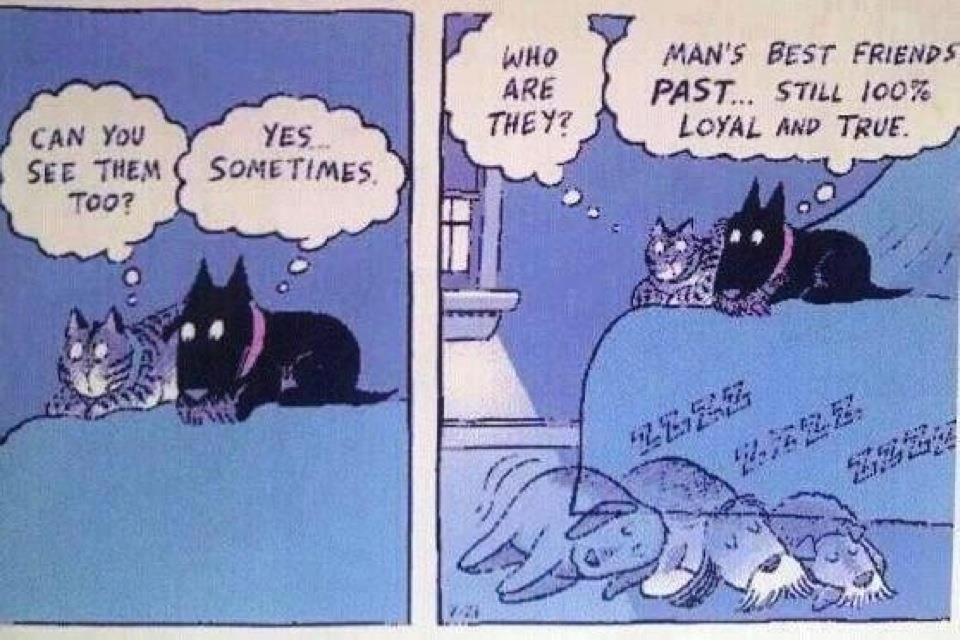 Those big ears hear a lot more than we do! My corgi can hear the tinkling of tags from far far down the street, way before  I hear them and he begins to bark and sure enough after a few minutes they come down the street