Do your dogs ever engage -- spontaneously, without benefit of human interference -- in "games" that appear to be more structured or complicated than just chasing around? 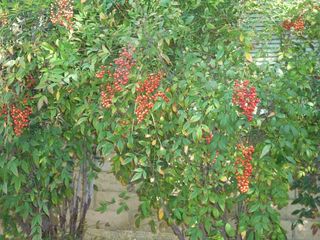 Out of the blue, Ruby and Cassie have developed a hilarious game of hide-and-seek. The front courtyard has a small hedge of fake bamboo-like plants -- xeric bushes that are kinda pretty and grow up off the ground in clumps. I'm sitting out here fiddling with the laptop and swigging iced tea, and they're chasing around in the usual way.

But suddenly the "chase" turns into a game that repeats itself over and over. Ruby, who runs much faster than the aging Cassie, races around the patio once and then darts in under the shrubbery, where she "hides" behind one of them. Cassie pretends to search for her (she's in plain sight) and then sniffs her out under the bush, whereupon Ruby darts off. Cassie resumes the pursuit, they circle the courtyard again, and Ruby then dives into "hiding" again.

It's quite a hoot.

In the past, I've been able to train both cats and dogs to play hide-and-seek. But I've never seen a pair of dogs, on their own and without coaching, "invent" or develop a game with a pattern almost like "rules" before.

Yes! Our 9 month old Corgi and my parent's 7 year old Golden Retriever have come up with a variation of catch (or fetch?). They'll stand about 10 feet apart, facing each other, and one will toss the ball in the direction of the other. The other will then retrieve it and then toss it back. If one makes a "bad toss," the other will sit there and make the other try again. It's very strange and it's something that we just noticed a few weeks ago. It also can go on for 45 minutes or so. We've been trying to get a video of it but as soon as we show them attention, they'll stop.