Getting a corgi puppy for the first time

I posted this in the wrong section so I'm posting this again. I would like to know your opinions on what ill need and what kinds of toys and chews are safe. if you prefer wire or plastic crate and why. This will be my first puppy on my own so any information is appreciated. 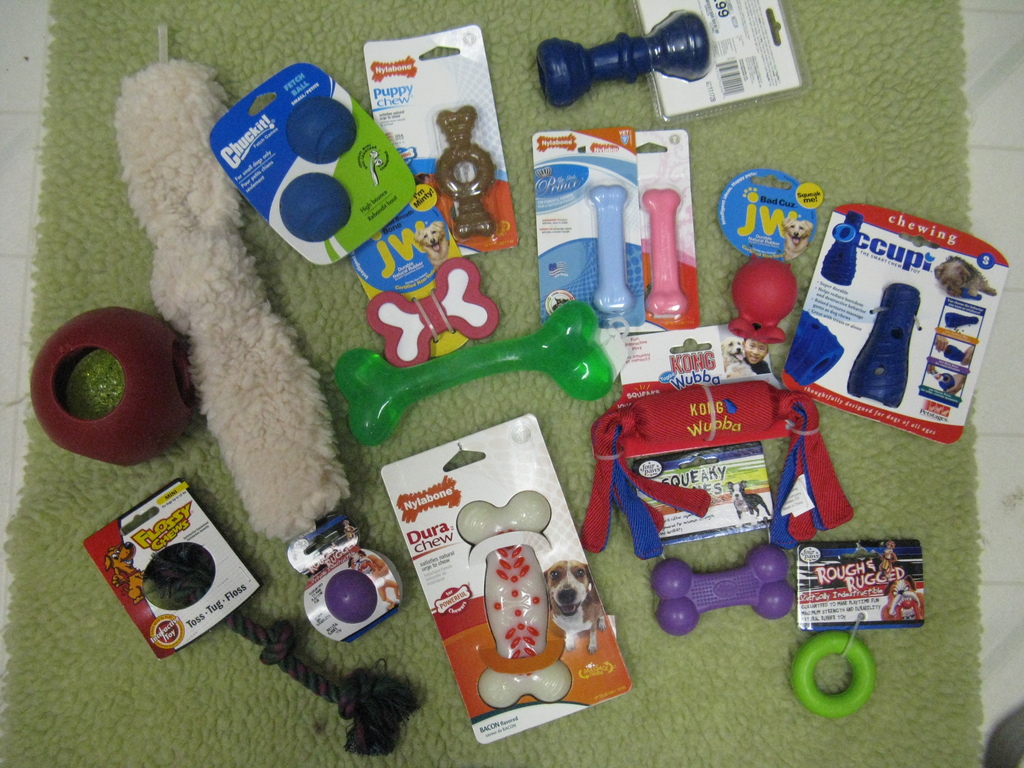 Must have's are the Chuck it's small rubber(orange and blue) a nice fleece toy with a squeaker and rope toy. NO latex toys...they can rip them apart.

I prefer the plastic crates, they are easier to move and put in the car also. The fire are bulky and since I used mine in many different areas it was much easier. An exercise fence works great for pups to have more room when you can't watch them. Make sure all cords are out of reach too...I lost my computer to a puppy:(

Permalink Reply by Ashlie on March 30, 2014 at 10:11pm
Thanks! My breeder said to not get wire because the pups can get stuck. My aunts malamute roughed up his wire cage quite a bit so I think I will go the plastic route. And thank you for posting a pic of the toys that is super helpfull. I've lost many ear buds and HDMI cords to my cat so I have learned my lesson lol. What size pen would you recommend?

I wouldn't worry about the wire fence cause you can get one with dimensions and spacing that he wouldn't get stuck.    Wally never stuk his paws between the wire and the fun part is to bring your pup to pet stores and try some on display to see what side and shape works.

Wow! Great selection of loot!!! Definitely I'm checking these out for Ruby-Doo.

Awesome selection of toys right there cause it will give him a chance to chew on safe options.   If he/she goes for furniture, just change the focus to something you approve instead.   You might have to do this several times during a day and make sure to supervise.    Some toys are described as "indestructible" which are false for some of them.    They can cut the rubber plastic and swallow small pieces.

I opted for the wire crate as Wally would wanna put his teeth to the test on the wires.   If it would have been plastic I would have not trusted him alone in it and probably he would have injured himself and/or I would have had to buy another if he's broken / chewed parts of it.    No need to have a crate with a wired top cause he will not jump over and it'll be easier for you put put him in and take him out when the door is closed.

I would recommend getting the Sour Green Apple Spray and keep it close one things he'll want to chew, such as possible furniture, couch corners, edges of stairs, etc.    One spray will not last several days so you migth want to keep it fresh until he learns it's not an option to chew.    Those sprays are usually safe on materials and will not stain.     But a nice wash wouldn't hurt after.     :)

I wouldn't recommend soft chews like plush toys, teddy bears or stuffed ones.   Unless you can supervise him and remove it if he wants to destroy but they don't serve any purpose for a teething pup.     Sure it's cute but it does nothing but being a new interaction of softness and discovery.     There's also lots of controversy about tennis balls.    Although a regular size will be fun for him to push around, make sure he does not want to chew the fuzz.    Small ones are especially a PAIN as they run under furniture all the time and sometimes they remove the fuzz and eat the rubber inside.    Never buy Dollar Store tennis balls, cause they'll break apart in a minute and it becomes a chocking hazard.

And when he gets older and his teeth are strong enough, I would recommend strong rawhides (natural kinds), Bully Stick and Hymalyan Cheese Chew.   They cost a bit but they'll last enough and keeps the dogs interested and coming back for him.

Bring him/her on Walks, outside, explore the environment, let it sniff and discover new things.   Avoid interaction with other dogs until he has his shots and daily boarding / daycare should be at 3 1/2 to four months of age minimum.    It's a great way to have the dog "Be a dog" and learn to socialize with older, bigger dogs, provided the facility is well supervised with knowledged staff on hand.    But make your research before selecting a site and talk to other that uses the facility regularly.

Some are too expensive for what it is and claim to be "Dog Spas" with too many bells and whistles, such as direct live feed cameras, plants all around the facility, up-to-date computers for tweeting and facebooking pictures, lots of toys to purchase.   But it's the owners experience and skills that are more important.

The most funny one in our area is about 30$ a day (not overnight) and the "platinum treatment" offers a wash, pedicure, other stuff and even a blueberry facial... yes, not kidding..    :)

It might be too soon for puppy - although I've never seen anything negative about Antlers for chewing. Milo loves them, he's 3yrs old, and they last forever! I get the ones that are split down the middle - Milo seems to like them better. I also recommend using a Dremel drill on the nails vs. the guillotine. This is the best thing my breeder showed me how to do when I got my first corgi Sophie many years ago. I try to remember to Dremel the nails once a week. Have fun with your new corgi - they're great dogs!! Welcome to MyCorgi - lots of help here on many levels.

I thought nylabone was bad for teeth..someone told me that but I wasn't sure

My dogs and pups have not had any problems and they actually have the small pup bones and some other fun stuff. Do check toys periodically.

I could see that...they do get sharper edges if chewed hard. That's why checking them is a good idea. I have heard of them chipping a tooth also but have not experienced it personally.

i have heard of several corgis breaking teeth on nylabones :(

Permalink Reply by Katy on April 4, 2014 at 10:20am
I've always used nylabones with pups and adults and never had a problem either Jane. I think it is more of an owner thing not knowing their dog (such as how aggressive a chewer he/she is) or not paying close enough attention to the deterioration of the dog'a toys.