Okay, this isn't as crazy as it looks... 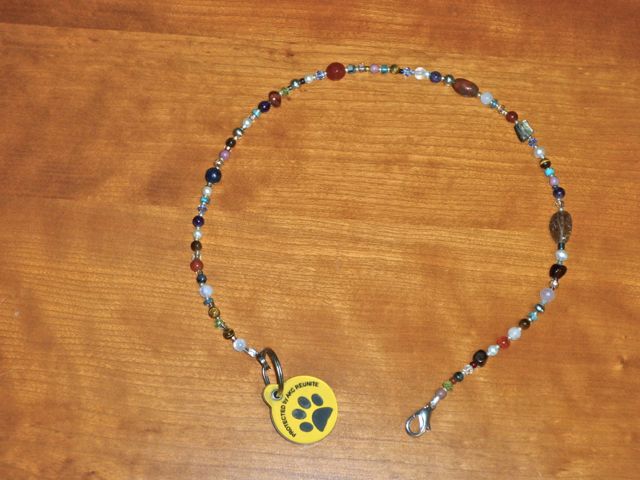 And, alas, it doesn't seem to look as cool in this photo as it is.

LOL! I made this little collar with random leftover stones and spacers from various beading projects. Since Ruby wears a harness and so never has a leash hooked to her collar, it dawned on me that she could dispense with the hated rolled leather collar. She's gotten used to that, but it's definitely the crabgrass in the garden of her life.

When she discovered that a wide world awaits her outside the back gate, I realized she would need to have ID on her ALL the time, not just when she goes for a doggy-walk. She's taken to trying to break out of the gate, so I have to shore it up with a heavy cinderblock, but I still worry about what would happen if she ever made an escape unnoticed. Hence: rolled collar with ID tags. And grumpy puppy.

This is much lighter, and it fits her better. And it surely does look cute as can be. Today while I'm out, I'll stop by the Petsmart and pick up shiny new ID tags for Ruby and for Cassie, who also has a glittery new necklace -- and who wears a martingale for doggy walks.

Lest you think this is a great idea: I would not attach a leash to any such doggy necklace! The beads are strung on wire, which might or might not break. But more to the point, dragging on it could harm the dog, because it IS wire, not a wide leather or fabric band. Also, if you leave your dog outside, I wouldn't leave the thing on, because it will not give at all if the dog gets hung up on something. I made it big enough so she could, in theory, slip out of it, but I sure wouldn't put any money on a panicky animal being able to figure that out. Ruby is inside most of the time, which is where she prefers to be. When she goes outside in back, I'm in the offing.

Made one for Cassie, too, but her hair is so thick it disappears. So she loses the glitzy effect. But it will hold a tag without adding much weight around her neck.

Workmen are coming tomorrow to replace the decrepit wooden back gate with a metal-framed number. They're also going to install iron fencing across the alcove-like exit into the alley, to keep the bums from using it as their favorite latrine. (Won't THEY be surprised! Watch: they'll throw it over the wall next...) At any rate, though I'm sure it'll just enrage the unwelcome visitors, it will have the effect of creating a double barrier for Ruby to get through. So if she succeeds in wriggling through the gate, she'll still be in a fenced enclosure.

{sigh} Life in the big city.

I love it!  I might do something like that too, but I'd be concerned that the necklace could get accidentally hooked on something, and being so thin, cut into the pups skin.  hmmm.  Its very pretty though.

Yeah: if either dog spent any time outdoors unattended, I wouldn't do it. If you want bling in that case, they make rhinestone-studded dog collars that are very cute. Ruby & Cassie prefer to be in the house when I'm here. I'm around most of the time, being "retired" (heh!) and putting in my 14 hours a day of editorial labor in a home office. Given the increase in the number of vagrants since the City kindly opened a new light rail line flanking our neighborhood, for security I now close and lock the dog door while I'm gone, so even if they were inclined to hang around outdoors when left alone, now they can't out there.