How to tell red from sable?

I've looked on this site and elsewhere online, and I'm not totally clear on how to tell a red coat from a light sable.

When we got Jack as a puppy, his breeder said all the pups were red-and-white. His mom was red and his dad was a tailed tri, so she was hoping for some tris and was unsuccessful in producing any.

When Jack lost his puppy coat, I noticed he still had a sprinkling of black hairs on his cap, the backs of his ears, along his spine, and at the base of his "tail". I didn't think anything of it, except to assume he got the black hairs from his tri dad. Now that I am reading more about colors, I wonder if he might possibly be sable? To look at him quickly he looks red-and-white, and that's what his papers say. But on closer examination, there are those black hairs. Can a red dog have black points? Or would that qualify him as a sable?

Here's two pics. This one shows the darker hairs scattered on his cap and the backs of his ears.

This one shows the black tips on his bunny bottom.

Now that he's blowing his coat, when I brush him I can pull out individual guard hairs that are very dark brown or black, along with the more profuse red and white guard hairs.

And yes, my pudgy guy is trying to lose a few pounds. :-)

Permalink Reply by Amanda on June 11, 2009 at 8:45pm
I'm actually a little curious about this myself, because I've always thought of Dax as red and white, but he looks just like Jack. The back of both ears is black, he's got a little black near both eyes, a little on his back, and his little nub is mostly black. I'm wondering now if he might be considered sable, because I've seen some red and whites that have absolutely NO black on them and the red on them is MUCH lighter than Dax. He's pretty dark but...how much black = sable?

Permalink Reply by Beth on June 11, 2009 at 8:49pm
I was looking at pics of red-and-white corgis on the PWCC website. They range from tan to deep red, but I don't seem to see any black on any of them.

If it matters, the whiskers on one side of Jack's face are white, and on the other they are black. It's kinda cute! But, I'm prejudiced.

Permalink Reply by Boo Buchheit on June 12, 2009 at 6:57am
I think he looks like a sable. They do change color a lot as they grow. Randy has lost his black color completely and is quite blond looking (his father is also a red headed tri). I love the sable color.

Permalink Reply by Sarah, Sadie & Dexter on June 12, 2009 at 8:20pm
A breeder once told me that Sables have the "saddle" that covers their backs and sides is significantly darker than the rest of their bodies; they also have a widow's peak on their forehead (such as Eddie Munster's hairline).

I can't really see your little guy's forehead so I am not quite sure if he has a widow's peak..but apparently it is a dead give-away.

Permalink Reply by Incorgiable on June 18, 2009 at 8:46am
Our Roxy is definitely a sable and has a well-defined widow's peak - but no saddle. 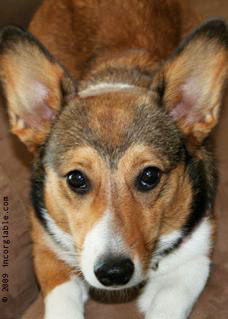 Permalink Reply by Wendt Worth Corgi's on June 12, 2009 at 11:34pm
There are different ranges of sables and yes...your guy is a sable and I must add...is very handsome. He reminds me of my Meagans coloring and I consider her a moderate sable. Red and white is just that...red and white..there is no mention of black. Though there could be a few black hairs in the red and white coat which makes them a sable but from afar they look red but reds aren't to have black hairs.

Permalink Reply by Incorgiable on June 13, 2009 at 12:45am
I've been really confused by this too. I'm under the impression that any black makes him a sable. We have all three Pembroke flavors. When we got Bella (our red) I was really worried, because she had quiet a bit of gray in her back, but the breeder assured me she would be a red. And now she is!

Permalink Reply by Beth on June 13, 2009 at 8:58am
Thank you all for your replies. What adds to the confusion is that in the pictures online, when they show "sable" they usually show a heavily marked sable, with definite black markings over large areas. They look almost like sawed-off German Shepherds.

Permalink Reply by Jennifer on June 13, 2009 at 11:08am
That is funny, Molly has the exact same coloring (dark behind the ears, along her back, and on her stub). She also has a dark patch on the left side of her face, with black whiskers coming out of that side and white on the other.

She is only 6 months old and I am sure her coat will continue to change, but it sounds as though I shouldn't count on her being 100% red :o) 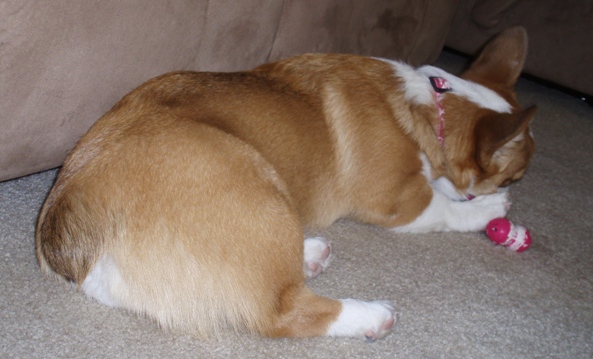 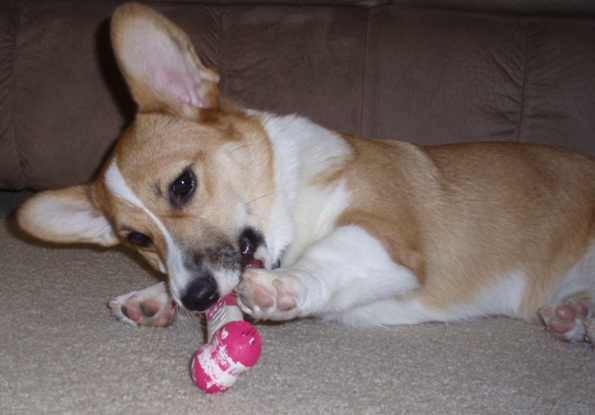 Her coloring is very similar to Jack's. But of course she doesn't have her full adult coat yet. Until Jack was about a year and had his first full shed, he had a little more black fringe around his face.

He also looks different in winter, with his full undercoat, than he does now in summer with mostly just top coat.

Permalink Reply by Corgibyassociation on June 13, 2009 at 11:46am
I'm wondering the same myself. Between Freya's shoulder blades there's a lot of black sprouting. She's got mixed whiskers--white and black. Her dad was a bht and mom was a red. She has a white saddle now--or cream...it's a lot lighter than the red elsewhere. Hmm...I wish I could get a good picture--it seems the lighting and my camera is not good enough for it.