I NEED ADVICE ASAP! Tomahawk may have swallowed a piece of raw chuck steak bone. Should I worry??

Stupid me, I decided to let Tomahawk have a piece of bone since I was cutting up some beef for dinner and figured he would be ok with it. I would check on him every once in a while to see how he was with chewing it and he didn't seem to be interested in actually eating the bone. Well right now I went in the living room where he was to pick up the bone and discard it and find out that a piece about an inch long and about an inch wide is missing from it. I don't know if if he actually chewed it up and ate it or swallowed it whole.

Now I'm freaking out a bit because the biggest worry I have is him having an obstruction. I tend to make sure no small objects are in his reach since he has a habit of trying to eat things he really shouldn't.

Should I worry?? I know that raw bones are not as dangerous than cooked ones and can be digested, but I don't know about how Tom will handle it.

I'm so stupid, I should have been more vigilant watching him.

I'll add a picture of a side by side comparison on the bone he chewed and one not chewed on. They are about the same size. The one he had was the one on the left side of the picture.

I'm really beating myself about this. The last thing I wanted to do was cause him pain by giving something I thought he would enjoy.

I would think, looking at the piece that is missing, that he should be alright. I would just keep an eye on him, because if it does not digest he will probably pass it thru his stools. My corgi at a piece of bone and it had a point on it where he broke it off. When it passed thru his system the pointed end was coming it first and got caught in the folds of skins in his anus. It was not a pleasant thing to have to remove it but we got it dislogded without any problems or damage done. Since then I no longer give my dogs any form of bones.

Wow! Thanks for that reply Joyce, that is exactly what I needed to know to feel better. :]

The thing I was concerned with was an obstruction happening somewhere down the intestinal tract, but if he can digest it then that is a big worry off my shoulders. I did soak up about half a cup of kibble in some leftover beef broth and gave it to him. I heard giving a dog bread can help in coating a sharp object they have ingested, but unfortunately I ran out earlier today. He seems fine and is frapping around the room like a bullet trying to get Fences so I'm guessing he feels super good lol.

I pick up on any changes on him pretty quickly so I'm going to keep a closer eye on him tonight and over the next couple of days just to make sure all is well.

Should I let him have raw bones as long as I keep a much closer eye on him?? He doesn't get a lot of opportunities to chew and his back molars show just that. Is there safer types of bones I can give him instead?

Permalink Reply by Wilson Waddlepants and Joyce on October 15, 2012 at 2:15am

On the one hand sometimes dog's don't let you know when they have a problem, like in the case of an underlying problem like diabetes, but I think we can be pretty sure that if Tomahawk develops an intestinal obstruction he'll be pretty uncomfortable and you'll know.  The information I had researched wasn't just something off a discussion board, it was from a veterinarian who was discussing the anatomy of canines and their digestive process.

The issue with dog's chewing on things to keep tartar off their teeth is very frustrating to me.  We've had to have our dog's teeth cleaned a lot over their life times and I just wish there was another way.  It's expensive, and having them sedated over and over again isn't good in my opinion.  Of course, having teeth covered in plaque isn't good either.  None of them like to have their teeth brushed, so I give them bones that look like the one below and they have never, ever chewed one up.  They just gnaw on them and they last forever.  That is my experience anyway.

Be sure to write tomorrow and let me know how Tomahawk is. 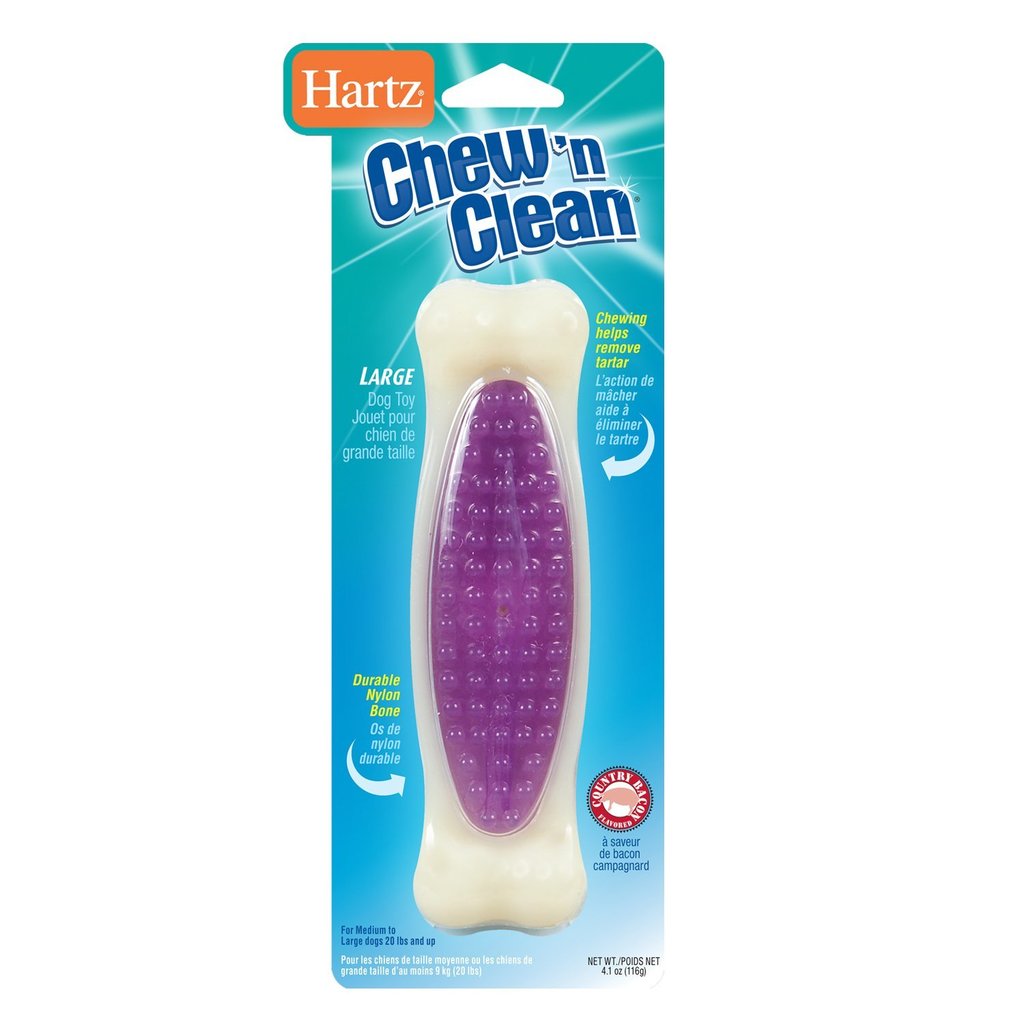 Haha Fences had one of those bones, and Tom loved stealing it away. He chewed the white ends into little flat slabs so I had to throw it away because I was pretty sure it was getting to the point were Tomahawk could break off a chunk. He did like it a lot, so maybe buying him another one (bigger one) will help with the chewing he needs.

I brush his teeth every other day, but his molars are already getting discolored. :[ I'm pretty sure it's because I wouldn't let him chew, or possibly letting him have a chip or two, or a lick or two of icecream!

Either way, I'm going to get on of these again, plus an antler and see if those help in cleaning his teeth.

This is going to be the one and ONLY time I give him a bone! I'm always concerned about him getting something he shouldn't and having something bad happen because of it. I figured a raw bone wouldn't be too bad but having to deal with the what ifs isn't worth it sadly. I just want to be able to give him something to chew on without having to feel so overly concerned.

Did you have to take your corgi to the vet to dislodge the bone or were you able to do it yourself? I once had to pull the casing of a tennis ball out of his butt, it came out like one big potato peel. Thinking back on it, it probably wasn't the smartest thing to do, but my first thought was "PULL IT OUT NOW!!" I'm always surprised of the things I see leaving his body, it's crazy what they get into lol.

Thank you for helping me feel better, I really do appreciate it. I worry myself to the point of nausea. I really need to lighten up and not get so worked up haha

My dogs have often eaten smaller bones when they have consumed birds and rabbits. I never see any bones come out the other end, although feathers do. These are, however, smaller, softer bones than what Tom ate.

If you want him to chew, try giving him antlers, or rawhide. When Lili had broken some teeth somehow, her vet told me the antlers were safer for the teeth than bones. I have read here of people giving their corgis raw chicken wings, but I've never tried that. Too much yuk factor.

Breaking his teeth was one of my concerns, he has already chipped one of his back teeth on an ice cube. Thankfully my vet said it wasn't too bad and didn't need to be removed just yet. I have heard about antlers, but worry if even those may be too hard on Tom. He isn't an overly aggressive chewer, but if he breaks a chunk off of anything, he is apt to swallowing it whole.

I will try it though and just make sure I watch him closely, is there a brand of antlers you can recommend me?

raw bones can not be digested. Not sure where you heard that. Raw bones cause obstructions all the time. Watch for vomiting and diarrhea and tell your vet he got a bone. They will do x-rays. One of the difficult things is that bone is the same opacity on an x-ray as, well, a bone, so they can be hard to piece out. Most of the time they can pass objects that are pretty big with no issue. Sometimes the vet says feed a heavy meal like wet food or some bread to help it pass. I also want to add it may take 2-3 days before you see an obstruction so just keep an eye on him. Franklin is the king of partial obstructions and is probably radioactive at this point with all the x-rays he's had. Only once did he have to go under and have something removed that was too big to pass so hopefully Tomahawk will be in the clear. Watch his poop to make sure you see it come out the other side.

So do I worry if I do not see any bone pass through to the other end but doesn't show any other symptoms?

Tomahawk used the restroom and I didn't see a bone sticking out so I'm guessing so far so good! He did have a whole bunch of logs this morning though, but nothing unusual about them. I will continue to monitor him and see how his next couple of restroom breaks go.