Yesterday we adopted a cat.  I grew up with cats and really they aren't too hard but behavior wise can be a challenge.  Yesterday was okay.  Kitty just slept alot.

Day Two is going better.  Still a little nervous about kitty.  Griffin (cat) is doing okay.  He seems to be socializing well with Matt and me and there is the occasional hissing at Owen (pem) but sometimes he baits him.  Griffin seems to be chill, he actually spent most of the day in the kitchen with Owen.  When I brought him out and took Owen out to potty, he actually went right back to his spot.  When we came home, he hung out with us and occasionally hid.

Owen has been a CRAZY barker though.  He's always been chatty but this is just out of control.  Any advice?  Did we let him be an only child too long (2 yrs in May)?  He is at the point of driving me nuts and to top it off, it is really raining now.  We had a week of beautiful walks but Owen doesn't even want to go out.  So he is barky and had two accidents yesterday!  I still love him but wow.. what happens when we have kids.

Also any kitty owners? Griffin has been drinking water (his dish and Owen's-bold sucker) but only been nibbling at the kibble.  He wouldn't even go for the tuna!  His former family fed him the same brand (didn't note flavor) and the only people food he had was tofu (really.. cat's eat mice, birds, sometimes rabbits and occasionally grass).  Give it time?  He has used the litter box?  I need a help me with my cat website too!

Permalink Reply by Stephanie on February 24, 2010 at 5:55am
I would think that the barking is a herding instinct. They instinctually use barking to herd livestock and Owen is probably trying to "herd" the kitty. I would work on Leave It.

Permalink Reply by Beth on February 24, 2010 at 7:11am
I would leash the dog if he persists on barking, and say "ah-ah" like you really really mean it. Like you're mad at him. For the cat, they generally recommend new cats be confined to one small room with litter box, food (on the opposite end of the room) and water. I would offer fresh kibble every day and try small amounts of canned to tempt him. Get something really smelly like Fancy Feast and take it up if he doesn't eat it in an hour or so.

Both times I moved with my cat I kept her in one room for a little while. Let them out to explore when they start asking to leave, and leave the door to "their" room most of the way closed so the cat can squeeze through but it feels enclosed when its in there. Cats are often very upset by moves. When I moved the first time with Alice, she hardly ate for weeks and dropped two pounds. It was to the point I thought she would put herself into organ failure before she relented. The second move was much easier.

Permalink Reply by Bev Levy on February 24, 2010 at 7:32am
I adopted two 4 year old cats three years ago. One spent most of his first week under my bed. I think the dogs various barking scared them at first. I never allow chasing or barking at the cat but they do bark at people coming to the door etc. Like Beth said leash him if he is barking at the cats to stop it. Also feeding treat while he is quiet with the cat in the room may help. It often takes a month or more for dogs or cats to acclimate. This is the cat that was the most scared 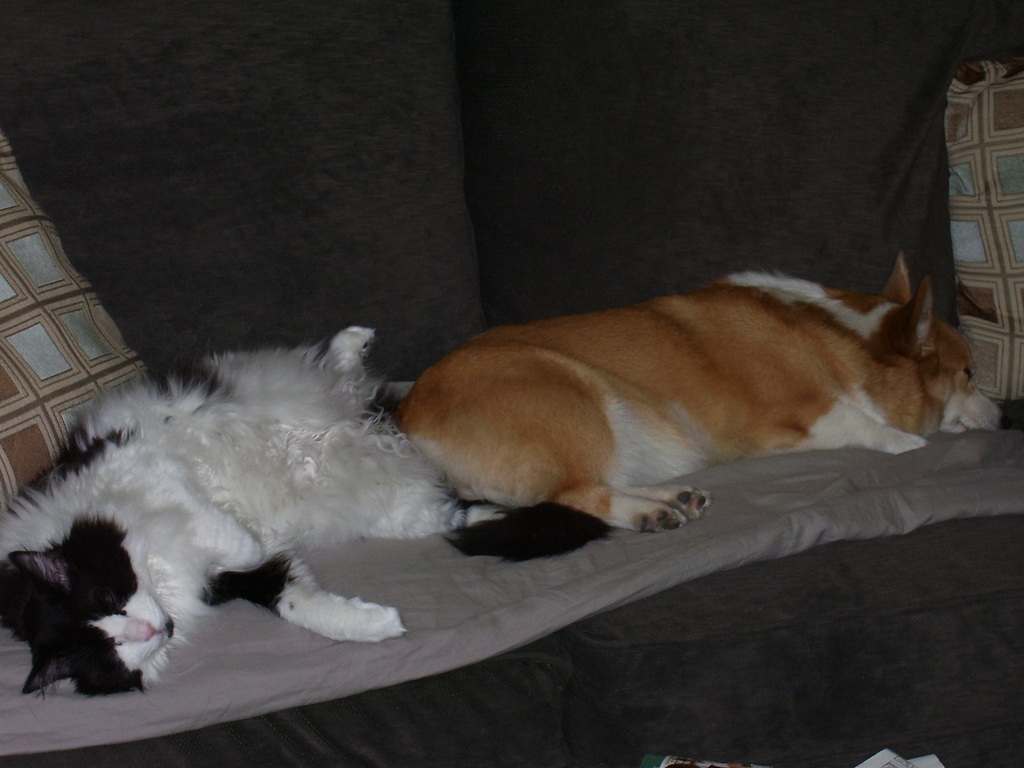