I posted a blog about the cloudy eye scare 3 days ago.  Please read it first before proceeding.

I checked the website of my local animal eye care specialist and found some information
on eye conditions.  The corneal endothelial dystrophy sounds like what Brian has.  His left eye is cloudy and blue while the whites of his eyes are red, with discharge coming out of his eye.

I did a search on the forums here on mycorgi and found this:
Supplements—need to be careful with these. There are danger in over nutrition—some vets have seen cases of corneal dystrophy (a degenerative eye condition) caused by supplements.
http://www.mycorgi.com/forum/topics/choosing-a-dogpuppy-food

I started feeding Ein and Brian a new type of food, called Vital by Freshpet, which is a few days before Brian started having eye issues (I got samples of each flavor/recipe).  His old food is Canidae All Life Stages.    Could it be the high level of moisture that's causing the possible corneal dystrophy?  Is Vital food too rich for Brian?  I'm doubting the ingredients in Vital are not an issue as most of the ingredients are contained to Canidae.

The thing that's starting to worry me even more than I already am is that Brian's right eye is starting to look blue (on day 4).  Brian's left eye is still completely cloudy and blue, and he's keeping it closed as much as he can.  :(  I read online that dogs keep their eyes closed when their eyes are in pain...

Please look at the pictures attached:
Picture #1 was day 1.
Picture #2 is day 3.- what weirds me out is that it seems to look like it's getting better.
Picture #3 is day 4 - taken tonight.

We got Brian an e-collar today to help prevent him from pawing at his eyes, since he just started doing so.

I did another search on corneal dystrophy and the website says to watch out for ulcers, but the vet did not find any ulcers, scratches, on his eye.  And the pressure was normal too.  So, it makes me think that Brian does not have corneal dystrophy. http://www.petplace.com/dogs/corneal-dystrophy-in-dogs/page1.aspx

and this site says Pembroke Welsh Corgis are affected by the disorder (which then again convinces me that it may very well be corneal dystrophy):
http://www.furrycritter.com/health/dogs/Corneal_dystrophy.htm

I am thinking about taking Brian to the vet eye specialist instead of going back to the vet since I'm afraid the vet may have missed something despite the two tests she performed.  But I figure I'd post here first for any insight you guys may have.  It breaks my heart watching Brian keep his eyes closed with an E-collar on, not wanting to move.

Permalink Reply by Geri & Sidney on March 25, 2010 at 12:29am
Oh my gosh AJ...I'd be so freaked out! Poor little Brian. Yes, I'd take him to the eye specialist as soon as you can. He looks miserable, and I know from watching your videos what a fun-loving pup he is.

I'm sorry, I have no practical experience or advice to give. I just hope the specialist knows what the problem is and knows how to fix it. Something that looks that bad, I doubt its the food, unless he had some sort of allergy to something in it.

{{hugs}} to you and Brian. I hope you can get an appointment right away. PLease let us know.

Permalink Reply by Sam Tsang on March 25, 2010 at 12:33am
I agree with your vet's findings, the tests she did were very specific and pretty much ruled out corneal dystrophy.

Is there a possibility that it was impact related? Mocha had a fight a year ago and his eye got scratched by a nail and it was very nasty looking, besides the swelling, his eye was cloudy, we kept washing his eye with saline and washed the discharge throughout the day, sometimes the discharge were so bad that it "glued" shut his eye. We kept up with the saline wash and took him a good 2 weeks with the ecollar on to recover. We did go to the vet on the 3rd day, the vet agreed that saline was the only thing needed and gave us some ointment.

Permalink Reply by Tauna and Kota on March 25, 2010 at 3:21am
awww. Poor Brian... And poor you. I would take him to the specialist to see if they can figure out what it is since the vet did do those 2 tests and it came back negative. If your vet couldn't explain it after the 2 tests, I would definitely be searching to see what is wrong and how to fix it. Hugs from me and Kota and hope for a speedy recovery.

Permalink Reply by Jane Christensen on March 25, 2010 at 8:12am
Oh poor Brian! I don't have any suggestions but I hope he feels better soon! Keep us updated!

Permalink Reply by Alice on March 25, 2010 at 12:59pm
I found this article and wasn't sure if this is something your vet checked for. I know you said they did some eye tests but what about blood tests?

No blood tests were performed. Should I ask for them? Brian doesn't seem to have jaundice, bloating, or poor appetite...and he received his hepatitis vaccine 3 months ago (at 4 months old). I really hope he doesn't have hepatitis..

We decided we'll hold off until the 7-10 day period is over with the eye drops...though I might cave in to go see the vet or eye specialist this Saturday which will be the 7th day.

Ein and Brian play tackling, wrestle, etc. But don't know why he's developing this now. If Brian had been scratched in the eye by Ein somehow, wouldn't the fluorescein eye stain show the scratch? I'm so confused :(

Day 5 update: Brian's left eye is now swollen...I gently lifted his top eyelid to check to see if the whites of his eyes were still red, and they were. But I noticed a layer of red gelly-like thing that is underneath the top eyelid. Is this the third eyelid? or has anything serious formed?
And that leads me to these questions:
1. Do I still wait until Saturday?
2. Who do I go to? The vet to get the blood work done and possibly find out that there's nothing wrong or the eye specialist to do some tests that the vet possibly was unable to do?

Brian has been resting today, keeping his eyes closed. Not much he can do with painful eyes and an e-collar :(

Permalink Reply by Beth on March 25, 2010 at 10:54pm
His right eye looks funny in that picture, but it might be just because he's holding it half-closed to protect the left.

I think if it were me and I had easy access to a specialist, I would try to get in there.

Permalink Reply by Sam Tsang on March 25, 2010 at 11:01pm
Keep up with the eyedrop, it'll help fighting the bacteria, keep rinsing the eye and wash off the discharge. Don't let Brian paw the eye or let him perform a face dive (mocha did that), the eye is very itchy right now and the pawing will re-infect the area and make it worst.

Any impact on the eye lid can also do that, it didn't have to be a direct scratch on the cornea. You'll be able to see the injured area once the swelling is down.

Give it a week, with the eye drop and saline rinse, swelling should go down significantly around then. Get well soon Brian! 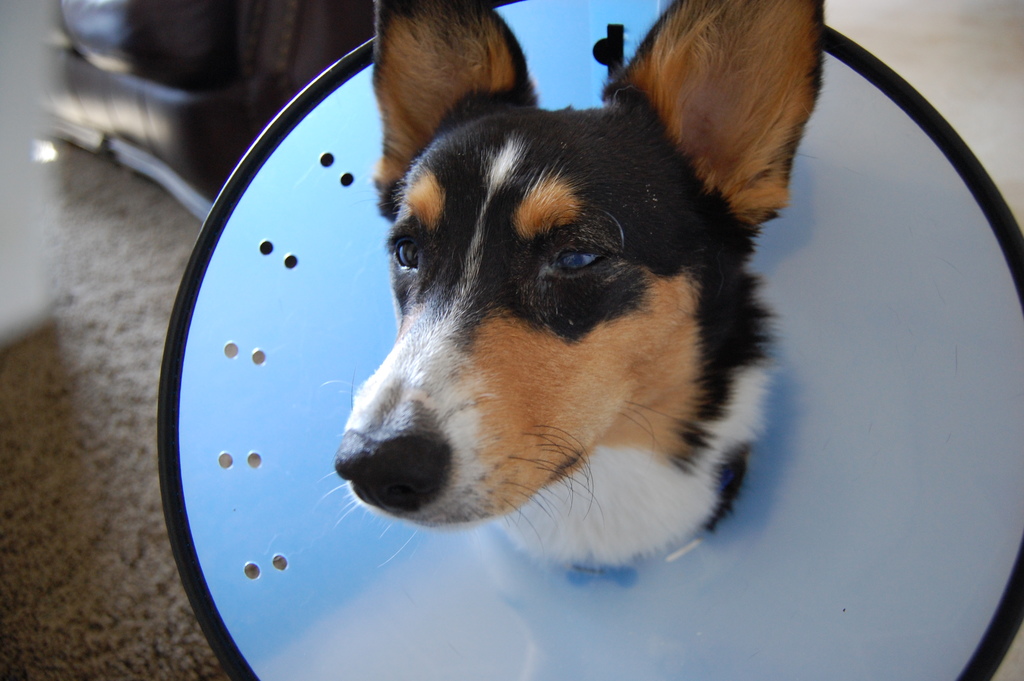 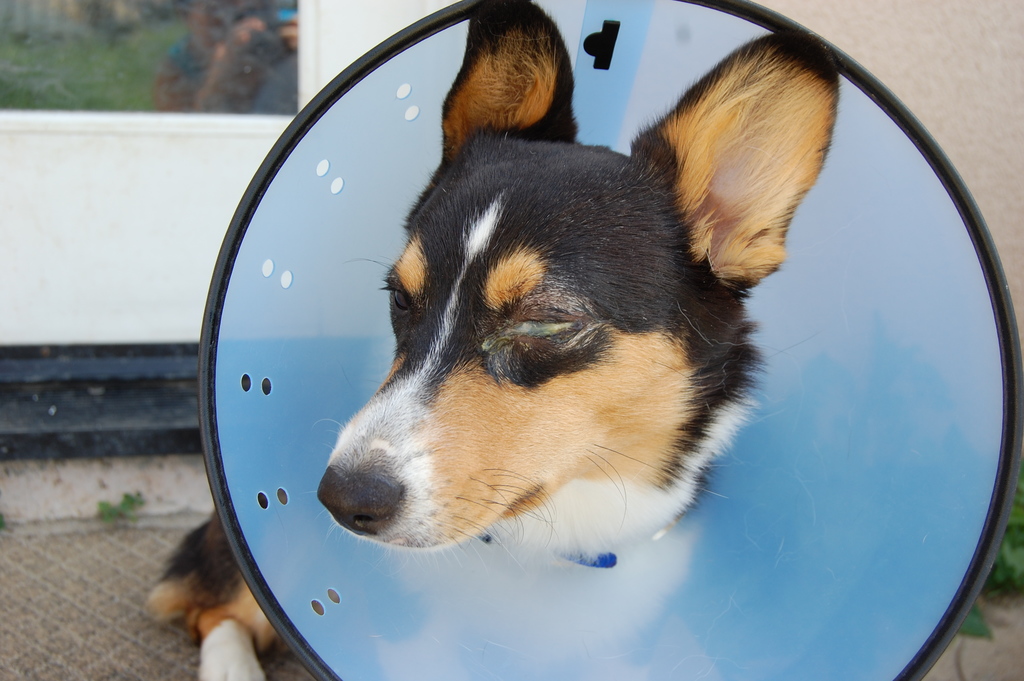 I'm not waiting until tomorrow, which would be the 7th day. It just looks like it's getting worse with time. We're going in to the eye vet specialist in 3 hours.

Permalink Reply by Sam Tsang on March 26, 2010 at 4:56pm
Poor Brian :( Mocha's eye injury was way worst that this, we couldn't bear the sight and brought him in on the 3rd day too, the vet said there was nothing else we can do, took the eye drop, keep up with the eye washing, wash away the yellow, green discharge (dead white blood cell) day and night. Don't worry, the discharge is a good thing, the eye drop works and he's fighting the infection. It took Mocha a good 2 weeks to heal.

Permalink Reply by Mary on March 26, 2010 at 6:43pm
I'm glad you're going to a specialist. My parent's labrador's eyes started looking a little cloudy, they waited a while but then her eyes started to look like they were bulging, so they took her to the vet and then a specialist. She has glaucoma and apparently it is taking place for a long time before it is noticeable. In humans we can feel the pain and get it treated very quickly but it tends to progress for a while in dogs since it's hard to tell that they are in pain until it's severe.

Since Brian's eyelid/eye is too enlarged (his eyeball swelled 4 times the normal size of an eyeball), he can't blink so they prescribed the same Neopolydex medicine the vet did but in the form of an ointment. Also Rimadyl (anti-inflammatory drug), Clavamox (anti-biotic), and Tramadol (pain relief), and the anti-glaucoma drug, Dorzolamide.

The Schirmer Tear test, Brian's right eye produced a low tears but it might've been due to the stress that he was feeling at that time. She tried to do it to the left eye but it was too painful for Brian, the paper wouldn't stay in. She concluded that it's not dry eye.

She said it could've been caused by a large number of things: a bug, trauma, virus.

She said that Brian might lose his eye if it gets really bad, just to release him from his pain.

Lastly, the eye vet dilated his eyes and did a slit lamp exam(?). It was really hard to see the back of his eye so she kept rinsing the yellow/green discharge with eye wash. The left eye did not respond to light.

She said that it is difficult to determine the prognosis. Brian's eye has really bad inflammation and pressure. So if she tries to treat the inflammation, the pressure may grow worse. So she prescribed non-steroid medicine.

She would re-check him 3-4 days later, but I'll have to see about my finances...

So many things to take in, I'm pretty overwhelmed and upset.

So, that's the update for today. 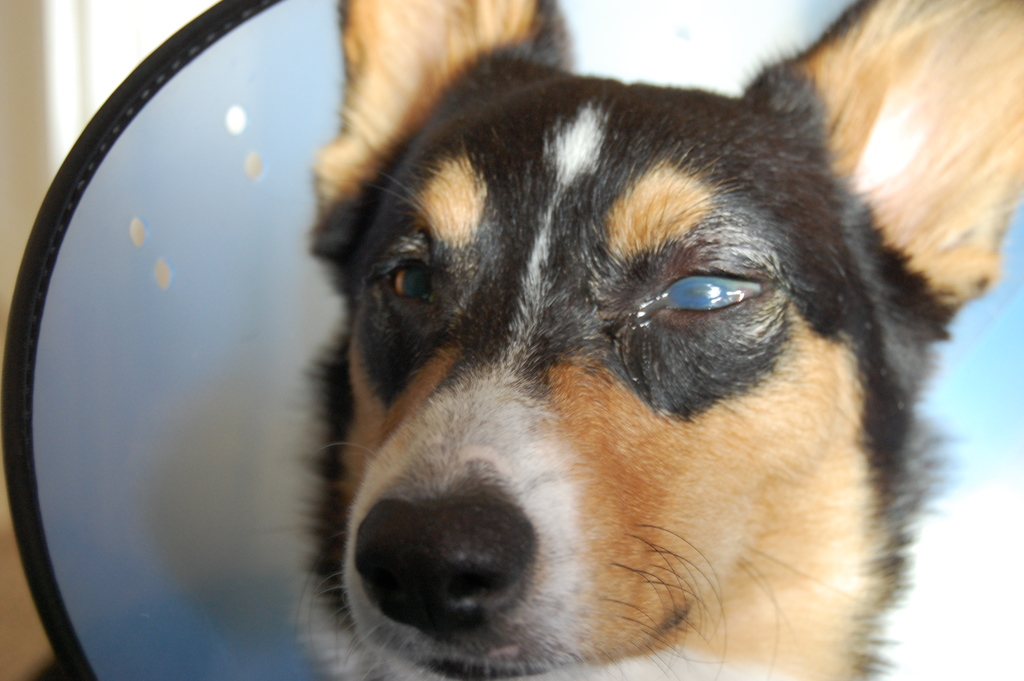