need some toy ideas that last

Hello. Have any of you found a toy that your corgi has not destroyed in 5 minutes?

My 12 year old corgi is down to 1 ball because he tears up everything else.  We have tried kongs, nylabone etc.  If you have any ideas I would appreciate it.

wow..even kongs!!??!  .....maybe try those water bottle toys...then after they crunch it ..you can replace it with another one... my tucker loves those!

another thought is www.planetdog.com....our cardi was a tough chewer but he did ok with kongs all other toys were from this website and only got the ones rated with a 5.  So, his toy box was filled with baseballs, footballs, snowballs!!  Although he did love frisbee, so he had a small frisbee which we played with him and any other stuffed animal toy/squeakys were for a treat.  He got those toys for short periods of time and that seemed to work for us.  Have you thought about food puzzles?

Permalink Reply by Denis J. on January 28, 2015 at 10:08am
This his Wally's favorite toy. On hard snow, ice or smooth surface, he runs a marathon and burns lots of energy trying to catch it. Made of hard plastic, it hits the ice hard and I can stand on it, does not bend or break. Plus he can't bite it so it's funny to see him try over and over again. 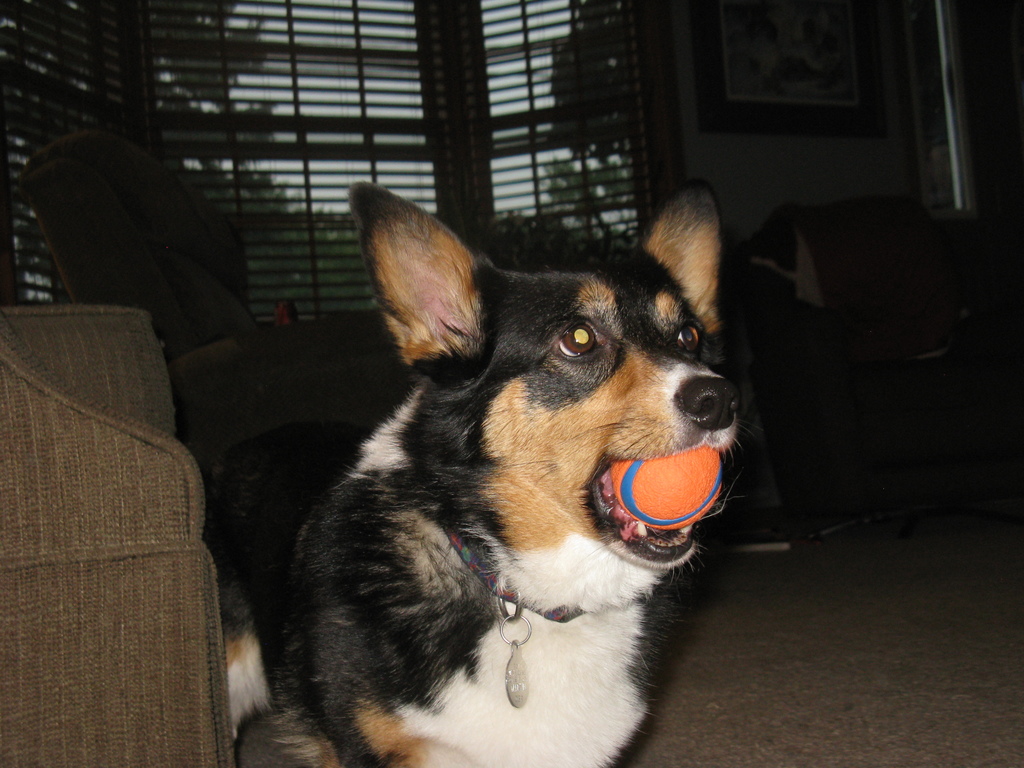 If he likes balls I would recommend the chuck-it orange/blue small. They come in 2 packs and the only ball that will keep a corgi busy. Mine carry them around all the time and sleep with them!

Good grief: I dog that can rip up a Kong? This animal should be submitted to the Guinness Book of World Records!

That Kong football thing that one of the other members recommended is pretty tough -- after reading about it here, I ordered one from Amazon. The smallest size they had was "medium/large," and it's a little too big for Ruby, who also is an accomplished shredder. She'll pick it up and carry it briefly but then loses interest.

When I had the toy-ripping German shepherd, I found she couldn't tear up a rope pull-toy. She loved them...would carry them everywhere with her.

Also (this was some years ago) there was a fleece stuffed thing that was shaped like a gingerbread man. You could find them at PetSmart. She couldn't (or wouldn't??) pull that one apart, which was weird, because it looked vulnerable. They didn't have a squeaker, which was nice.

Also had a fairly large, very heavy rubber ball -- it was about the size of a softball -- that the shepherd couldn't rip up. It was kind of cumbersome, because it didn't bounce very high and it was pretty heavy to throw around. But that one survived the dog and still resides in the garage. It's too big for a corgi. I think I may not have got that at a pet store...it may have come from someplace like Target or a Penney's sporting goods department.

Just wanted to say Thanks to you all for your responses. I will try Blaze on some of these toys and see how it goes.  He is a tough cookie because it seems to be his job to destroy these toys ASAP.  :)