I am new to this site.  My son will soon be picking up his new puppy of eight weeks.  He is purchasing her from a breeder in Southeast Missouri.  She has litters once, maybe twice a year.  Has four or five females.  Late this summer she had three litters from three beautiful females.  I believe she has two or three puppies still available.  All others have been sold.

We were recommended to her by someone we met in our area who purchased a Pembroke from her a little over a year ago.  A beautiful little girl she is, for sure.  Healthy, sleek and happy.

She has been sending my son a lot of helpful information about what to expect, vet appointments he should make, and updated photos regularly as Kallie grows.  She is six weeks old right now and he picks her up in two weeks.

Seanna is a HOOT!  She is very mischievous....that's what I love about her.  She has personality.....Jackson is around 9 years of age they think.  He does great for an "old" dog.  Let me know how it goes with the puppy!

Jackson looks like a real sweetheart.  I ran a feral cat rescue group in our area for many years.  Had to give it up a few years back due to the time constraints and the financial burden.  We could get donations, but it never covered it all and I kept picking up the tab.  Mostly, however, I had to pull back due to my age.  We have several new rescue groups here who are doing a wonderful job on that front anyway, so it was easier to pull back.  When I first began Alley Cat Allies was one of the big ones, but a lot of people didn't realize that feral cats could be socialized and adopted out to good homes.  Mostly groups back then did the spay/neuter/release program.  We did that for awhile until we found that many could be socialized.  I pet sit for many of the ones that I managed to adopt out to good homes.  I offered adoptees one week free pet sitting each year.  Mostly from a selfish point of view in that I wanted to keep some kind of contact with those in our rescue.

I only mention that because you said Jackson was a rescue dog.  We found in the cat rescue situation that they turned out to be some of the most wonderful pets one could ask for.  I'd bet working with dog rescue has shown that rescue dogs appreciate the change in their lives, the security, the love.  I have great respect for any involved in rescue/rehoming of any domestic animal/pet.

Like your little Seanna, I am hopeful that Kallie will have a little of that mischievous disposition in her.  While it can mean keeping an eye on them, at the same time, it provides much more in the way of a challenge and laughter on a big scale usually.  Our entire family is looking forward to Kevin's new friend.  (He applied for membership to this forum, but hasn't been approved yet.  Does it often take awhile for that to happen or did his application maybe get lost in cyberspace?)

We're on the countdown now.  Next Saturday is Kallie day ...................  I feel sorry for her because she will be taken away from her comfort zone of her siblings, but I know she will be getting a great friend in Kevin and lots of love from our family and his many friends, most of whom have dogs.  No corgis, however, so he will be the first.

That is Seanna's dad!  So, that would make Kallie Seanna's half-niece?  Or niece?  I'd have to do it on paper...too early in the morning to think that hard!

All of my dogs/cats with the exception of two, have been rescue dogs.  I agree, they make the absolute best pets!  I really think they know that you rescued them, and that they have a wonderful life now.  Jackson literally smiles.  It's the darndest thing....at night, he makes you rub his belly until he goes to sleep, and he has this big grin on his face the whole time.  And he is such a sweetheart...which amazes me because the puppy mill he came from was pretty bad from my understanding.  He has chunks of his ears missing-either from fights or frostbite- and scars on his muzzle.  But, he's never met a human he didn't love.  Everyone just absolutely adores him.  We adopted him for my daughter who was going through a very rough part of her life- she got diagnosed with dyslexia and congenital kyphosis the same year.  He was the cure she needed.  He immediately bonded to her, her to him, and they have been best friends ever since.  I get my "grandma" time with him when she's at school, but other than that he is latched to her.  Her turnaround has been amazing since she got him.  She can deal with stress much better, has a much better outlook on life, and she's gotten completely off her anti-depressants.  Animals are definitely the best medicine!

I am thinking of opening a rescue too...you should give me some pointers!  We've been looking for acreage for a couple of years now, and actually just bought a house on 12 acres and close at the end of this month.  It's been a dream of mine to do a rescue for the last 20 years, and my husband actually said the other day that we should look into doing it this spring.  Our city here flooded in 2008 (Cedar Rapids, IA)- and they started a spay,neuter, release program for all the cats that were left by their owners and feral ones.  I feel so bad for them--they have volunteers that go feed them every day.  Many have been adopted out, but some are just so feral that they've kind of given up on them, and they just feed them now.

I am so excited for your son--his life will change in so many amazing ways.  The best thing I ever did was get a dog.  All of my animals are my life.  I wouldn't change any minute of any time with any of them.  I am really excited for you guys!

I just checked the pedigree of Kallie's mother.  Her father is listed as "Gone Country".  That wouldn't be Seanna's dad, would it?

Kallie's mother is Brooke.  Brooke's father is Gone Country and her mother is Candy Kisses.

I just checked Kathy's website.  She had a litter which has a due date of October 8th.  She originally posted it as Mimi (mother) / Teddy (dad).

The Fortin's are where our Payton came from.  Kathy was very helpful and supportive when I needed further medial history on his parents when he started having seizures and was then diagnosed with idiopathic epilepsy at age 5yrs.  He was the only one in the litter and in his lineage that had problems. She pleased to have this information for records too.   ....It's been a little over a year since Payton crossed the bridge due to kidney failure at age 8.  He was my heart dog and would do it all over again.

I am so sorry to hear that Payton is no longer with you.  Every time one of my little pets who have left this planet comes to the forefront of my thoughts, I get little tears in my eyes and choke up.  Even with those that have been gone for many, many years.  They are all so special to us.

Kidney failure and cancer are, I believe, number one and two in mortality causes in cats.  Not sure about dogs.

I am a pet sitter and I have a number of clients with cats and dogs dealing with ideopathic epilepsy.  Their pets are all on phenobarbitol to help minimize the seizures, but no cause has been proven as to why the seizures occur.  In the cases I work with, the medication has been successful.   Hopefully Payton was able to have good quality of life with his medication/treatment.

We are really looking forward to having Kallie in our lives.  My husband and Kevin put in a small fence today which will allow him, and us ..... :-) , to take Kallie out for some ball toss or frisbee where she can be off leash. Kevin takes long walks at least once a day and when Kallie arrives, he plans on twice daily, so both of them will get plenty of exercise.

Thank you, Stephanie.  Payton's seizures were horrible so much that that he had to be on pheno and potassium bromide to keep them under control.  It took about 6 months but once they were under control with the  meds, he lived a very good life. Everyone who met him loved him because he was black & white as well as so VERY sweet!!  He touched a lot of lives.  ....Payton also had DLE which is form of lupus not common in corgis, but common in collies.  He was a special little guy.

Hope your trip to MO and back is a safe one.  I'm sure you will enjoy Kallie.  The most recent picture kevin posted shows just how precious she is!!

I'm a breeder friend of Kathy's and also have a Candy daughter named Angel.  Her sire was a dog named Rodeo that she doesn't have anymore.  She's a nice lady.

I had a cat named Angel.  Unfortunately, she is now truly an angel.  She died a little over a year ago due to cardiomyopathy.  She seemed totally fine when I went to sleep and when I got up the next morning, the dear little sweetheart was dead.  Most of my cats live to 18+, so it was a real shocker for me.

I have two clients who lost their cat to similar circumstances.  The normal age for that happening is between eight and ten years.  In our cases, all cats were eight years of age.  Angel was such as sweetheart, as was Bridgette and Rose.  Bridgette and Rose were rescue cats I adopted out to their families.  At least in all of these cases, they had eight+ years of being loved and the best of care.  I read online where one lady lost her cat that way and her cat appeared perfectly normal prior to that.  The cat was jumping from one chair to another and she just collapsed.  How heartbreaking..........  Sorry for the sad stuff, but every time I see that name, I remember how sad I am that she is not here.

How old is your little Angel?  Do you breed Corgis or another breed of dog?  If you are located closer than Kathy, I'll pass the word as I have clients who often are looking for puppies.

Angel is 3.5 years old, we raise only corgis.  I used to live about 3 hours from Kathy in south central MO but have since moved a further 4 hours west into Kansas.  Attached a pic of Angel. 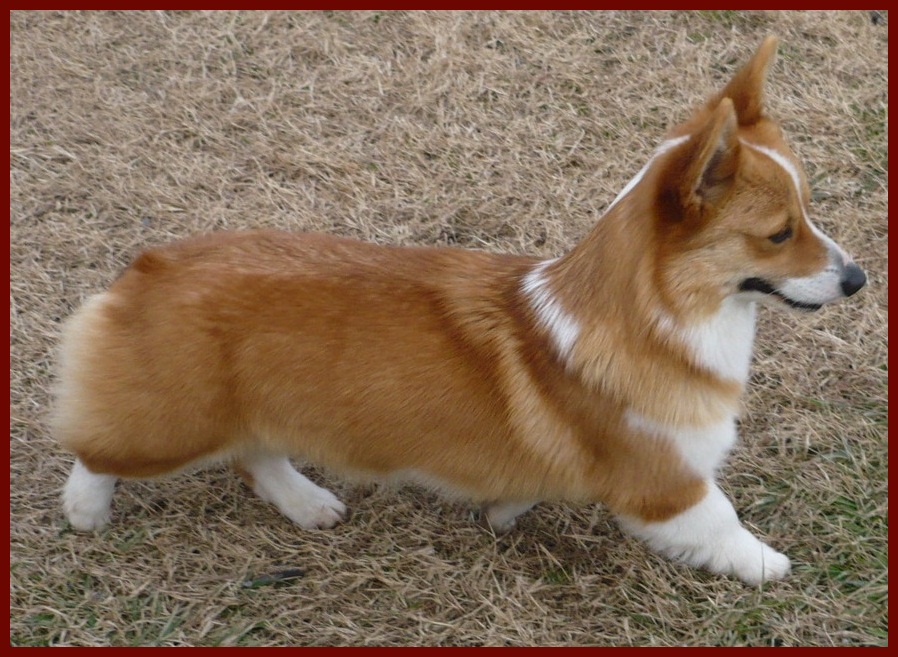 Oh, my goodness.........Angel is absolutely beautiful.  What a beautiful Corgi and a wonderful photo.

Likely your location is a more distant drive than for us to go from Champaign to Kathy's.  I know Kevin has spoken about possibly adding another Corgi a couple of years from now.  He wanted to get the full idea of what being responsible for his new friend would mean and then he thought another companion both for Kallie and for him would be great.

Do you have a website where potential Corgi purchasers might stay in touch with your future litters?