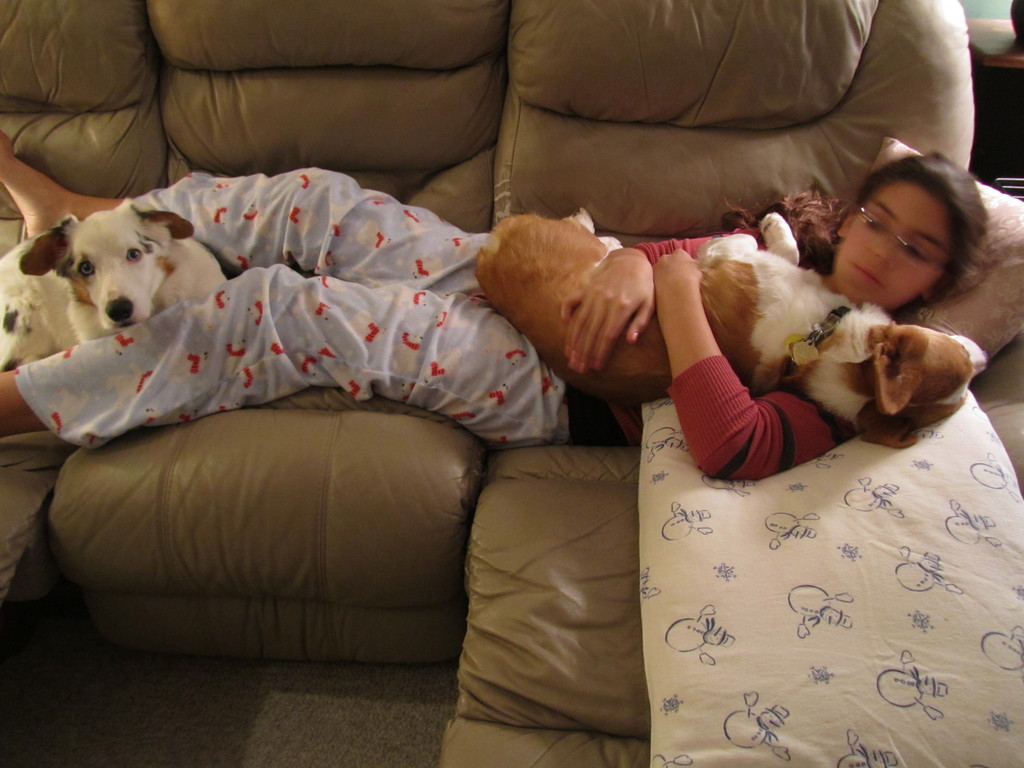 Well, off to the vet Tucker went this morning.  I put Tucker in the car for my husband, and when I closed the door and he started driving off, Tucker was staring at me like, what, why aren't you going, your usually the one who goes with me when I go places.  I would have gone too, and would have loved to but he had to be there before the kids had to be on the school bus, and yes, I ended up having to drive one of my daughters to school cause she missed the bus, how did I know that would happen, lol.

I called my husband to see how the drive over to the vet went and it went smooth, why wouldn't it.  Tucker loves car rides and just totally relaxes in the car.  My husband said that as he was leaving the vets office, Tucker looked back, like wait, your leaving?!?!?  Hopefully going to the vet after this he will be as calm as he is always was.

The vet told us to call after 2 to see when we can pick him up from his teeth cleaning. Heres hoping that all goes well and it is very uneventful.

Looking forward to getting lots of corgi kisses when he gets back and not having to smell that awful breathe!!  Ohh, and I just remembered I was suppose to take a before picture last night so then I could take the after picture of his clean teeth, oops.  Oh well, I wont forget what they used to look like!!

As I sit here and think some more, they better not forget to clip his toe nails, they need it so bad, and what a perfect time to get it done!!!  I wonder if I should call and remind them??

Picked Tucker up at 4:30 and he came prancing out to me, looking a bit sleepy, but to be expected.  I got down to his level to say hello to him, and he greeted me with lots of kisses.  :)  As I saying hello to him, the slip lead he was wearing all of a sudden became very loose and I quickly fixed that.  I asked about his leash we brought him with, and when they asked the vet about it they said they didn't have it, sooo, my husband ended up bringing it with him when he left!  So, we left with the vets slip lead, that I will return tommorrow.

I brought the crate with, so I could put Tucker in there on the way home, although he is very good in the car and usually just falls asleep or lays down and relaxes.  When we got to the car in the parking lot at the vets, Tucker was very excited to hop up and bashed in nose into the crate and his body went side ways in front of the crate so he balanced himself so he didnt fall after that.  He then proceded to go in between the crate and the front seat and I had to carefully pull him out of there to put him in his crate.  Tucker is pretty agile little guy.  :)  He is a quick one, before you can say dont do...hes already up.

Tucker is doing very well he has held down the water we gave him and was very excited to eat his meal, which he is only suppose to get half of his normal meal, so by tommorrow he will be starving I'm sure.  He ate his dinner with much enthusiasm tonight.  :)

Lance was excited to see his brother back home, we put Tucker in the gated kitchen to relax and Lance was up at the gate sniffing Tucker.  Lance is ready to play too, he's going to have to wait a little bit.

I returned the vets leash this morning and I was talking to the vet techs, about how I love Tuckers fresh breath, they both were like, yeah, his breath STUNK....LOL.....and it DID....its so nice for the bad doggie breath to be gone.  They did say his teeth were healthy though, yay!!!

Hopefully all goes well today.  :)  Be prepared for lots of fresh corgi kisses when he gets home!

I hope all goes well with Tucker too! It will all be worth it when you pick him up!

We can pick him up at 4:30, they are just finishing up polishing the last side.  Apparently my husband called right after I did, to check on Tucker and he is doing well.   Nails are cut too, bonus...he was in need of that too.

glad to hear he is doing well! Usually the will take before and after pictures to show you. Hopefully they do this time and you can get a copy! :-)

that would be so cool if they did take before and after pics, heres hoping they did!!

Feeling  a bit guilty?????  It sure wouldn't hurt to call. I just made a trip to the vet this week to get food, took 2 dogs along and then when I got there I remembered I should have taken Wynn in for his nails, darn! Hope Tucker does well!

Im a bit confused?  Guilty about?  :)  Tucker is ready to be picked up at 4:30 and when I called at two like they said too, I did ask if they remembered to cut his nails and they said yes.  :)

I just keep thinking of the discussion does you dog make you feel guilty and you talk a bout Tucker looking at you when your husband drives away with him and then he ends up at the vet...just was meant to be a funny:)