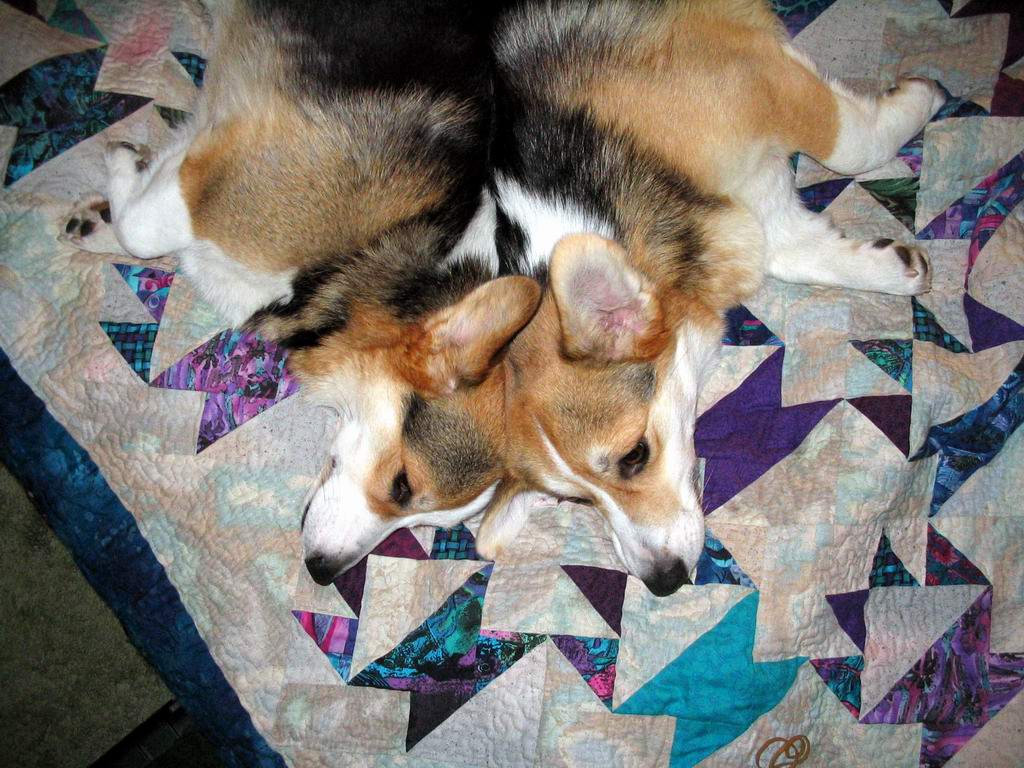 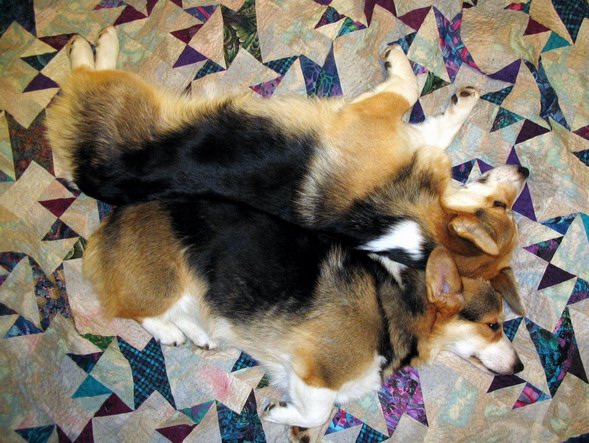 Two new corgis in our home!  or... one new corgi?  We are rescuing/fostering two corgi pups, conjoined along the dorsal spine at birth. We're calling them, of course, Gemini (collectively) or Castor and Pollux (individually).

This is extremely rare, and a very difficult birth that ended in an emergency C-section.  They did not share a placenta, so I guess that makes them regular fraternal littermates who happened to get jammed up together, not identical twins.  A veterinary postdoc is publishing a report about them.

Although they share some blood circulation, the spines and nervous systems are almost entirely separate, so our vet thinks she can surgically separate them.  She thought they were too small to do this earlier.  They're about 6 months old now.

As very young pups, one could walk with the other riding upside down on the other's back -- they would take turns -- but now they're too heavy for this.  They can sort of flop together and scramble around on their inside legs, but it's getting cumbersome and they need to be separated soon.

Luckily, they don't fight over food and they play together well, but when they try to sniff each other's butts... well... it's as comical as a corgi chasing its tail.  Potty training was easier than you'd expect -- they quickly figured out that if they both go at the same time, it saves a lot of trips in-and-out.  They usually coordinate somehow when they're walking about, but sometimes they just lose it -- like when they're attacking the vacuum or retrieving a tennis ball -- and it's utter confusion.  Leash training has been a disaster -- we've tried one leash attached to both collars, and two separate leashes -- but when one dog makes a mistake, it's hard to correct the one without inadvertently correcting the innocent partner, or even tell which was at fault.  At least, now that they're so big it's getting difficult for them to move at all, they've finally learned "stay".  But they've never mastered "Sit" because it's physically impossible for both to obey at the same time.

Once they're physically separated, they'll be either emotionally inseparable or so sick of each other's company that they'll have to go to separate homes.  We'll keep you posted.

Oh, and by the way, the surgery will be very, very expensive, so if you want to help these poor, adorable dogs with a tax-deductible contribution, just send us your credit card # and PIN, your Social Security #, and your checking account # (we even accept cash) to our P.O. box in the Cayman Islands.  You can help poor little Castor and Pollux... or you can turn the page...    <'sniff>

Permalink Reply by Melvin Brock on April 6, 2011 at 11:26am
VERY FUNNY !!!! If i had seen the date, I would not be about to cry...  No one loves Fuzz Butts more than me and I was sick.  They are great looking babies. I could never get my two to do that unless they were passed out.  I actually had basset pups. One of each sex in the same sack. Yes I delivered them myself.

Especially the "poor little Castor and Pollux...or you can turn the page *sniff*"  ROTFLMAO!

Permalink Reply by Holiday Thomas on April 9, 2011 at 9:42pm
Am I the only person who was in tears over these poor babies?  I thought that you should be sainted for taking care of them and I feel like such a sap.

Permalink Reply by Priscilla, CARLY, and Frankie on April 9, 2011 at 11:09pm
...lol....are you kidding me i was crying too until the very end and i realized i had been dupped...hes a bad boy alright!

Permalink Reply by Lucy &amp; Ricky (Wendy/Jack ) on April 9, 2011 at 11:57pm
@ Holiday Thomas - Hardly! There were MANY saps, incl me. John's just too clever. Forearmed is forewarned. Maybe you won't be fooled again!

Permalink Reply by Lucy &amp; Ricky (Wendy/Jack ) on April 9, 2011 at 10:07pm
I also fell for it, initially, hook, line & sinker. Great photo. Convincing. Felt like a fool when I read who posted it! What a brat. But he's our brat & we all love our bad boys. Plus he's worth the price just for his photos and humor. People have commented that they see Ricky-Rafa's halo. I see Kathy Wiley's halo and wings!