What do you think about the Corgi I´m getting?

Hi. I am brand new to the forum and to Corgis. I am about to get a mismarked Pembroke Welsh Corgi puppy and I wanted to know what you guys thought about him, whether you notice anything apparently wrong with him (other than the face mismark, which is quite big, pretty much all white, unlike most face mismarks I´ve seen online -this is the only Corgi breeder in Argentina and I had never seen one "in the flesh" until I went there, as a matter of fact I knew the breed through Cowboy Bebop-).

I also wanted to hear any tips you may have on training, feeding, etc and any potential dangers I should look out for. Also, how best to introduce him to my cat. She is a stray (named Kali) that I´ve had for some 4 years now, she is around 7 or so and is very loving and affectionationate. She was used to my old dog, a 14 year old Beagle (named Gandalf, I really miss him a lot), they never fought, Gandalf pretty much ignored her, and so did she, though she would sometimes take a swipe at him, though I´m not sure if playing, saying "hey, that´s far enough!" or what, but I would always chastise her when I saw her do it.

Here is a picture of him (he will be called Ryuk) and I was told he was some 22 days old and that I can go pick it up starting on July 20. 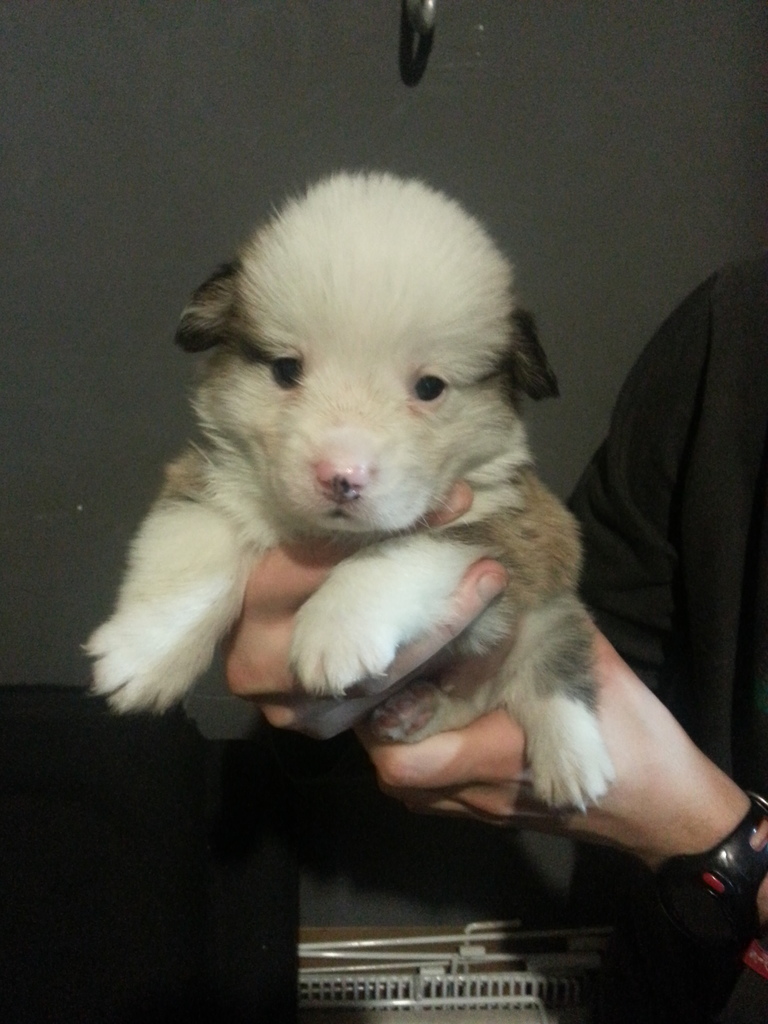 Griffin was 9 weeks old when I got him.  He wouldn't use newspaper or puppy pads.  I set the oven timer for 1 hour and took him out every hour carrying him down the steps.  This was in March with lots of cold, freezing rain.  Once he managed ok for an hour I upped the time between trips outside to 1.5 hours, then 2 hours, etc.  I got my coat and boots on before getting him out of his crate--just pick him up and carry him outside--otherwise as soon as his feet touch the carpet he'll pee.  Corgis are really smart--he'll get the hang of it soon!

The little guy keeps scratching and biting himself. The vet could not find anything that could cause it (fleas or anything else) but they gave me something to kill fleas and other such pests but to no oeffects, and whatever it is sometimes hurts him, he cries out in pain. Any idea what it could be and what to do about it? I already took a stoll sample to check for parasites, the results should be ready by Tuesday evening.

If he wasn't so little I would ask the vet if Benadryl would help. Is it certain areas such as his butt or all over? Can you try to pet him and calm him when he does this? Maybe a food allergy? but he shouldn't be in pain from that. Could you place a cold rag where he is itching to sooth the pain? Sorry I don't have any good answers. Have you given him a bath and his skin is dry?

I haven´t bathed him. It don´t think it´s a food allergy, he is still eating the exact same food he was given at the breeder´s. Sometimes if you distract him by petting him or playing with him he will stop scratching, but not always. Even though he scratches all over it seems like it hurst when he is scratching (biting actually) his feet, the hind ones especially. I have tried brushing him but it didn´t seem to help :(

Biting the feet sounds a lot like an allergy/reaction to something, but you said it was winter where you live so that doesn't make for a great explanation. Did he just get a round of shots? Did the behavior start soon after the vaccinations? My puppy had a bad reaction to his 2nd round of puppy shots and had me very worried for a couple weeks with compulsive behavior which the vet could not explain. It is really best to do one vaccine at a time rather than a whole slew of them at once, especially when they're very young.

If he is constantly biting and scratching and stressed out with no explanation as to why you may need to take him back to the vet, or try a different vet.

He just had his first shot on Wednesday and he isn´t due for the next until the end of August. The scratching started before the shot. By the time he hadn´t even gone outside once, he was indoors the whole time.

I have a cat (who is not too happy about him) but she has all her shots and no fleas (I applied some flea/tick drops a couple of days before the puppy arrived). He scratches and bites himself a lot and many times he cries out in pain when doing so, but he does not appear to be stressed out, whenever he isn´t scratching he is either sleeping or playing as if there was nothing wrong with him.

Sounds like an allergy, maybe to his food. Even if he is getting the same as the breeder was feeding him, he could have been allergic to it then also. Read the ingredients and see if the first or second is corn. If so, think about slowly changing him over to something where the first ingredient is meat. Many dogs are allergic to corn or wheat.

I am totally confused.  I replied to this shortly after Karen did and it's not here now but I did see it post.

Anyway....I agree very much with what Karen said, check the ingredients in his food.  When did this chewing start?  Was it immediately or was he in your home for several days before it started?  You said he was doing it before you ever took him outside.

I would also consider that it could be your flooring.  If you have carpet he could be reacting to something in the carpet.  If it's tile or wood which in it's self shouldn't cause a problem but possibly whatever you use to clean the floor with (or your carpet) is leaving a residue that he is sensitive too.  Even rinsing a floor after washing may not get up all the residue left by the cleaning solution.  He is very young and babies are always more sensitive to things.

I will definitely check the ingredients on his food. I hope it´s only that. The floor is tile, there isn´t a single carpet in the entire house. For some reason most of the time he lies on the floor (usually in the worst possible place, the other day he was curled up behind the fridge) instead of on his bed or the cloth we lay around for him and his toys). I´m not sure when exactly the scratching started, if it was immediately upon arrival or a few days later.

Try rinising the floor with a mild vinegar solution and then rinse it several times after that with plain water.  It might not be that but it's an easy thing to try along with checking his food for corn.  The first thing listed should be meat and if there is any grain in the food it should be so far down the list of ingredients.

For the chewing I recommend finding a few chew type toys for him.  I dont know if you have the Kong line where you live and those were great when my two were puppies.  To get our to stop nipping we also made a HSSST noise, which they now associate with "stop that behavior."

The potty training is as everyone has said.  Remember human children take 2-3 years, so 3-6 months for a puppy isnt too bad.  As soon as he has all 3 series of shots, start introducing him to other puppies and people.  Walk him on a leash prior to that to get him used to it.  Cage train him definitely and make it his retreat.  Both my Corgi go into their cage when they want some peace and quiet.

Remember Corgi's need a LOT of exercise.  Teach him to fetch and play also.  Try getting a laser light pointer and getting him to chase it.  If it gets cold where you are or it's raining out you can play "chase and herd" the light instead of spending a long time walking him.