Why did you choose a Corgi?

Of all the pets I have owned throughout my life, I think it is funny and interesting that about my Welsh Pembroke Corgi I am very often asked, "Why did you choose a Corgi"? My first response was, well I think they are cute, but upon further reflection there is more. When I was in 3rd grade I read a story titled Little Dog Lost, about a cogri that got lost and was raised by a fox. I was very intrigued by the story line and charmed by the description and illustrations of the Corgi. Every great once in awhile I would come across a Corgi and remember the story and admire them, then I knew somewhere in my future I would have a Corgi. So how about you all, why did you choose a Corgi?

Permalink Reply by Jen on January 4, 2011 at 3:49pm
I had a corgi/chow mix that my ex husband and I rescued from a shelter.  She was the most wonderful dog.  I don't know that I had ever really heard of a corgi before we took her to the vet and he told us that's what she was.  She had the body and personality of a corgi, but the fur and black tongue of a chow.  She was adorable, and very smart.  I started reading up on the breed and have been in love ever since.  That was back in 2001 and I just got my first pure bred corig this fall.  It was 9 years in the making but so worth it!  I wouldn't trade her for anything :).

For me I think it was a mix of corgi exposure that wooed my heart to the waddly little darlings.

In college I was taking a Organic Chem final study break and found a link a friend had sent to me of a youtube video.  It was of the most adorable sable and white corgi pup (probably about 8 weeks) just waddling around, laying down and falling asleep, playing and just generally being adorable.  That, I think, planted the seeds.  About a year later one of my friends rescued a sublimely adorable tri-colored corgi.  He had the sweetest temperament (I was surprised when she told me he was 2 yrs old and had been abused because he was just so incredibly sweet) and one of the things I remember vividly was her talking about how quickly he caught on to training because they're quite smart.  They actually trained him well enough to be the ring bearer in her wedding-- carrying the pillow on his back and then, after it was taken off his back, giving the rings to the best man and maid of honor.  I'm not even kidding about that.

When I moved to Chicago my partner and I lived in a young neighborhood and we saw so many corgis walking their owners all over.  All of them were friendly, sweet and hilarious.  What other dog looks so happy all the time?  The little naturally smiling faces, adorable bat ears and excited waddle just make the cutest, happiest looking dogs you can find.  We were both convinced and we decided that once we lived in an apartment that would let us get a dog, we'd get a corgi (and name him Stanley...we actually included that in our wedding vows. Ha!).

We ended up getting a cardi just out of coincidence.  When we were looking at ads for litters in the area we saw lots of pems that were beautiful-- some had great temperaments and some didn't, depending on how much they'd been handled of course.  We knew our big priorities were health and temperament as we wanted a companion dog we could take hiking or just have sitting around the house or in the car with us.  Then I happened upon an ad for a litter of cardis with a gorgeous blue merle boy's picture and a note that the puppies had been "snuggled every moment of their lives" which made me think that perhaps this adorable pooch was just what we were looking for.  I think I showed it to my husband 10 times in one morning, each time saying "we should go see this one.  Isn't he adorable?"  A 4 hour drive later that day and a meeting in the parking lot of a Starbucks and I think it took us all of 3 minutes to completely fall in love with our little blue boy.  It may have been the quickest transaction in history and we've been delighted since.

My husband worked with a guy who had corgis.  I had never seen them before but thought that they were the sweetest, friendliest dogs (and they smelled good)!  They also bred corgis... when they had a litter they wanted us to come and see the pups.  We never did.  The next litter that they had we happened to go see them.  All the way to their house Tim my husband kept telling me we aren’t getting a puppy.  I had never had dogs before so I wondered why he kept saying that.  We walked in and saw the puppies, we watched them play and one of the pups kept coming over to us….Tim said this is the one I would choose, but we aren’t getting a puppy!!!…..We put a deposit down before we left.  We have been so happy with that decision!

Permalink Reply by Chris West on January 4, 2011 at 5:30pm
I was a teenager watching dog shows and dreaming about showing my own dog when I fell in love with corgis. I always loved their happy attitude as they cruised around the ring. My decision to get one was cinched when I watched Harry P the first couple of times. I just thought he was the most amazing looking dog I had ever seen, and I decided right then and there that a cardigan was the dog of choice for me! After getting Frosty, I was astounded by his enormous personality in such a little package. My husband and his whole family were not impressed with my choice of dog, but once we brought Frosty home, they have had nothing but great things to say about him. He listens well, is a great family companion, is always doing something to make us laugh, and is just an all around great guy. I can't wait to get another!

P.S. Here is another recent discussion about this if you want to read what some other people wrote: http://www.mycorgi.com/forum/topics/what-made-you-fall-in-love

Permalink Reply by Natalie & Stanley on January 4, 2011 at 5:35pm
Chris, I know exactly what you mean about other people not understanding at first.  My husband's family was confused and seemingly disapproving of our choice in a corgi when we first told them.  We brought Stanley, who's just over 3 months, over for the holidays to play with their black lab and by the time they left they were so in love with him that on their way home yesterday they stopped at the breeder from whom we got Stanley and adopted his littermate.  Another convert!

Permalink Reply by Bev Levy on January 4, 2011 at 8:30pm
We stumbled into corgis but I did remember watching a Westminster Dog Show many years ago on TV and they highlighted a Pembroke by showing him at home and around a farm herding. I thought at the time that it was a really cute dog. Years later after going two years without a dog I talked my husband into getting a puppy.His only request was that it not be another large dog like our wonderful Standard Poodle. After taking the "best dog for you test " I thought a Pug would be a good choice but the puppies we found were $1800 and my Husband said "No way I am paying that for the -------- ugliest dog I have ever seen! (sorry Pug lovers I still think they are cute) so I thought maybe a beagle since that is what I grew up with. The beagle puppy we found at the shelter was already taken and there were no ads for them. I did not want my husband to change his mind so did not want to wait too long so noticed an ad for corgi puppies. He said the famous words "Let's go look at them"  Lol! Is it possible to look at a litter of corgi puppies and not take at least one home? Sparty joined our family immediately and we have been hooked ever since.

Permalink Reply by Lisa B on January 5, 2011 at 11:07am
No it is not possible to go see corgi puppies and not bring one home, OMG they are too irrisistable!

[Please, bear with me; this is the only way I can effectively describe my husband's and my first ever encounter with corgis (Pems).]

Imagine Teletubbie land (you know the rolling green hills with flowers, a big sun - minus the baby face, and bunnies hopping everywhere.  Okay, well about 14 years ago, my husband and I were at a place that looked like that.  Now, imagine looking out in the distance over a hill and seeing a herd of about 10 little fairy dogs with seemingly no legs running as fast as possible up the hill toward you - all with great big smiles on their faces.  :-)  In the time it took for the whole pack of them to get up the hill, my husband and I turned to each other, squealed with glee and made a pact that the next dog we ever got would be a corgi.  We finally got one this past year when we lost our rescue girl, Molly, who needed to be an only dog.

BTW - We had never heard of Cardigans until a couple years ago when Animal Planet started running dog show reruns on Saturday mornings.  After doing some research and considering that we really wanted a tail because Molly didn't have one, we decided a laid back male Cardigan would be best for us considering we have a young child and multiple cats.  One day though, I think I might still need to get my bunny butt fix. :)

Permalink Reply by Lisa B on January 5, 2011 at 11:09am
Where in the world was this fairy land with multiple Corgis racing in the sunshine to you, and what were they doing? Are you sure you werent dreaming? 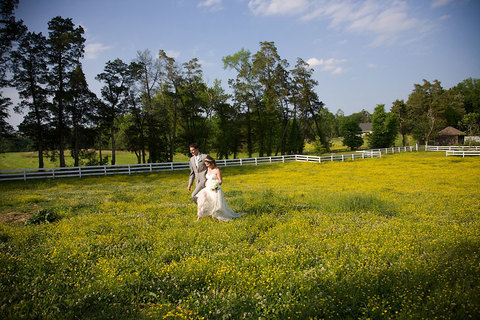 Ha. No, not a dream, but certainly surreal.  It's Tuckahoe Plantation in Goochland, VA.  Note, I have no idea who the newlyweds in the photo are. :)  The owners of the house were Pem fanciers and out of nowhere, the corgis just came running up the hill. :)

Permalink Reply by Angela Kau-Forsberg on January 5, 2011 at 2:09pm
I have to say, your story is the best I've heard yet!