No one has posted yet??  Come on guys - let's hear some great puppy stories.  It helps me so much to hear from others as they raise their corgi puppies.  And I know that you have some good ones!  I'll start:

Luke (4 months) is a very food motivated guy.  My other corgi would prefer playtime or praise to treats and we have to really encourage her to eat her meals.  Luke is the opposite.  But while we are encouraging Leia to eat, Luke is just waiting for a chance to steal a bite of her food.  We are training him not to do this and he is showing lots of improvement.  But when he is finished eating, he'll go sit next to Leia and watch her.  He no longer tries to steal bites, but he just watches her.  She eats.  We are glad she eats all her meals now but I'm not sure I'm making the best decision by letting Luke watch.  Do you let other dogs watch yours eat?  Or does yours watch anybody else eat?  What do you think about me allowing Luke to watch while Leia eats?

Well, Chuckie does not eat his kibble.  I thought it was because I wasn't giving him enough activity to make him hungry enough to eat.  I found out that wasn't true.  When he was 3 months old(he's now 4 months) my brother and his girlfriend came to stay with us for a week.  She brought her male chihuaha puppy named Bubba who was also 3 months old.  He was a tiny little thing that only weighed 3 pounds while Chuckie was 10 pounds.

But, Bubba was a dominant guy and anti-social.  When Chuckie first met him he growled and barked fiercely at Chuckie and wouldn't let Chuckie come near him to smell him.  So, I picked him up and let Chuckie smelled him but, Bubba still continued to be very fierce. After that night though, Chuckie found out that Bubba was all bark and no bite. Bubba sounds very scary when he's trying to keep Chuckie away but, he doesn't deliver the bite.  Chuckie caught on to that and Chuckie stopped being afraid of him.

Chuckie then started to play with him whether Bubba wanted to or not.  Chuckie would roll him around, sit on him(I was shocked!), use his butt to fend off Bubba's attacks, run around Bubba and then use his paw to swat Bubba, and so on.  Well, Bubba figured that since he lost on that part then he would be possessive about the toys, food, and treats.

Chuckie nipped that in the bud too.  He would just come in and use his weight and push Bubba out.  That's when Chuckie  started eating his kibble every meal.  If Bubba was eating he would come right in to Bubba's bowl and eat.

When he first started doing that Bubba would growl at Chuckie and then they would get into a growling fest where most likely Bubba would end up being smothered or rolled around and Chuckie still ended up with the food. I tried to help but, I was only able to get it to the point where Bubba would just give up his food and walk away instead of growling and getting smothered by Chuckie.  Then Chuckie would eat Bubba's bowl of kibble and then HIS bowl of kibble, making sure not to leave any for Bubba. In the end, Bubba just gave Chuckie whatever he wanted.  If he had a toy and saw Chuckie walking towards him, Bubba would just get up and walk away.

Not to say that Bubba didn't try to get back at Chuckie.  Bubba @ that age was already humping.  He had a monkey toy that he would hump and I believe he was humping to dominate.  When he loses his toy or chew item to Chuckie he would sneak around Chuckie, watch Chuckie intently and then slowly get close to Chuckie's butt, hop on and hump really quickly and then get off and run.  Before Bubba learned to get off quickly, Chuckie would turn around to look at Bubba then just swat him off with a paw and Bubba would end up tumbling around a couple of times before coming to a stop so, Bubba learned that he needed to get off fast!

My brother told me it was the first time Bubba ever gave up being dominant to another dog.  He had met one of my brother-in-law's male chihuaha too and he totally took over everything, the toys, the food, the other dog's home.  Bubba scared the other chihuaha completely and the other chihuaha was older too, about 1yr to 2 yrs old.

Yeah, it was a frustrating week.

Chuckie also does this water & kibble break when he's doing his FRAP around the apartment.  He would run around really fast back and forth and when he feels he needs a water break, he would run to the kitchen where his bowl is, drink his water, get a mouthful of his kibble, then continue on his running spree around the apartment.  I didn't know he still had his kibble in his mouth when he starts FRAPping again and there were 2 times he stopped and then you hear a loud 'Aaaaack!' and out pops a kibble, where he would then proceed to eat it again and continue on running.  I'm just like 'Would you stop and completely swallow first?! If you choke I don't know how to help you!'

I think your Luke is very polite in giving Leia her space. I don't think there's anything wrong with him watching her eat unless she doesn't like it.

Here are some photos of Bubba and Chuckie : 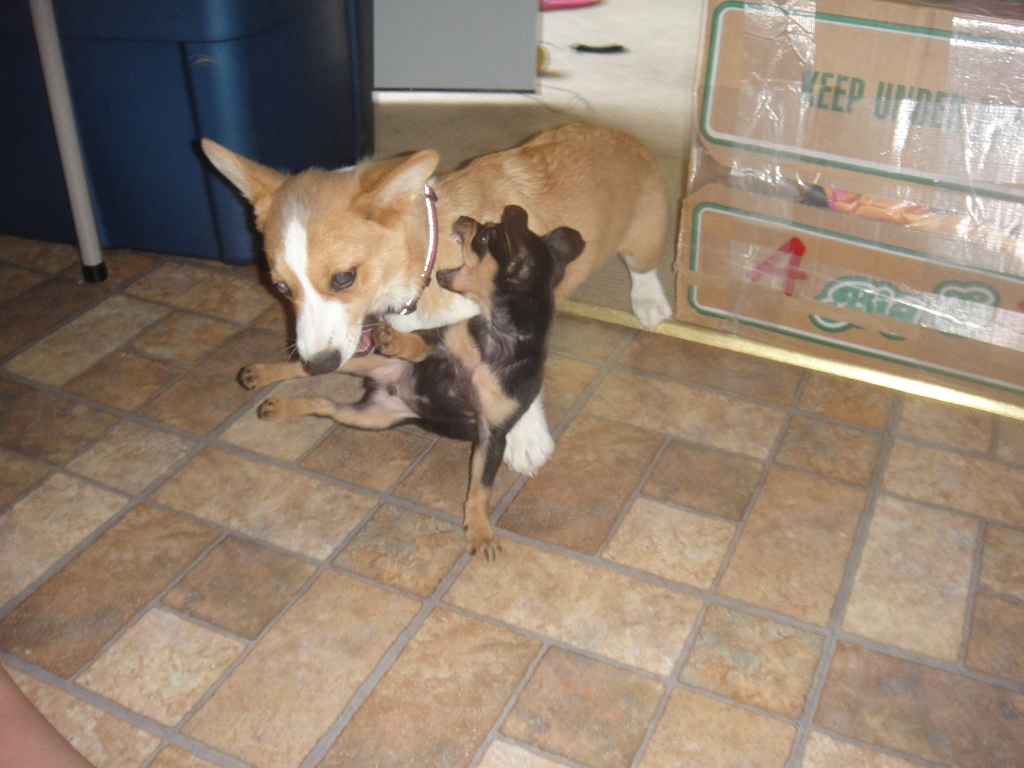 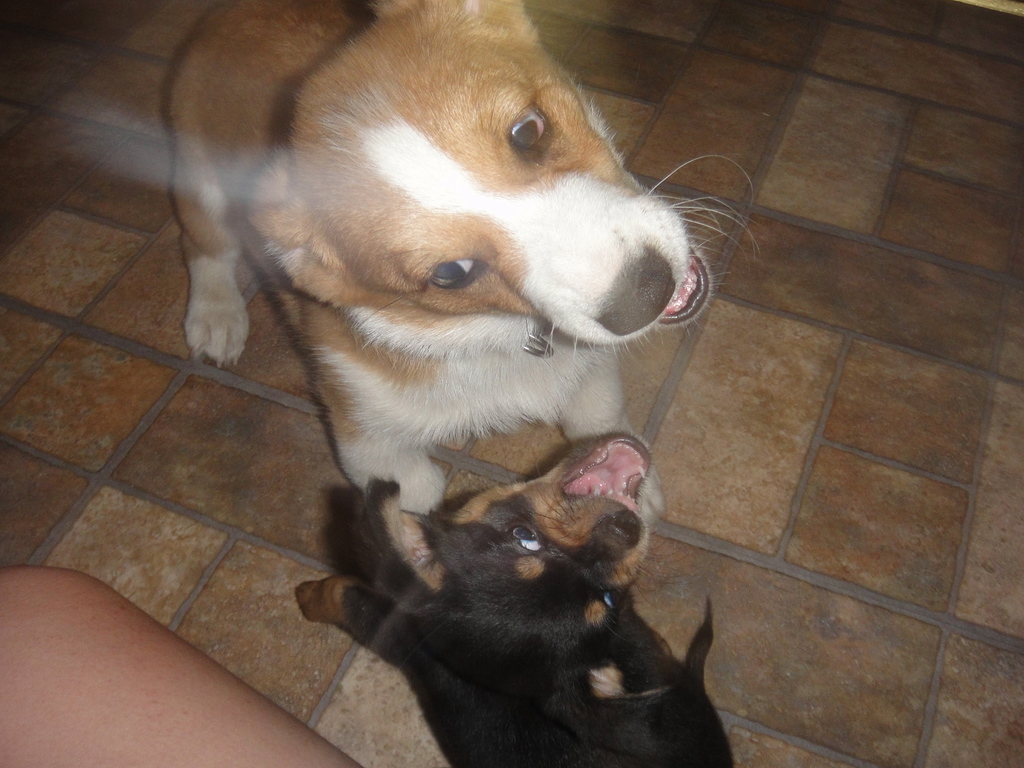 hilarious.  I can't believe Bubba's big boy attitude!  Luke has gotten more polite.  Now, he sits across the kitchen while she eats.  If she walks away - which she does often, he will try to sneak in but has learned to see if any people or animals are looking first.  Usually - someone is watching him.