(the above link has the story and many more photos). 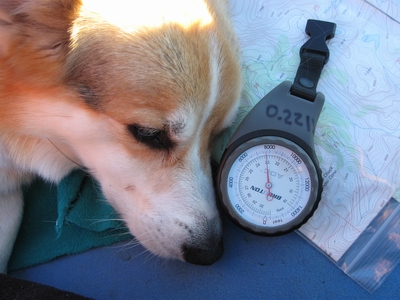 Gynnie has climbed the peak just left of the setting sun.  Corgis are unimpressed by sunsets.  Sunrises are much more significant because they mean the next meal is very soon: 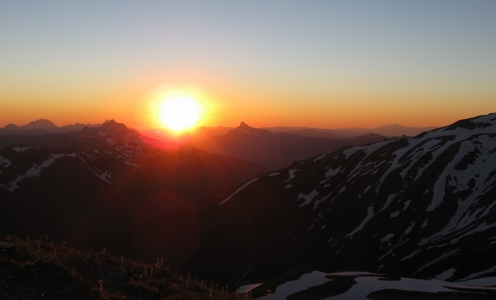 Al could have reached the summit easily if we'd gone to the right on the glacier -- as many climbers do, unroped -- but this is against Al's better judgement.  Nobody falls into a crevasse they can see.  So we tried the S. ridge direct route, but it was so rocky, not corgi-friendly at all.  We wisely retreated with our tails between our legs -- quite a feat, as neither of us has a tail, and one of us scarcely has legs.   We got to 9200', Al's record.

Here's our 1st camp from our high point on the South ridge: 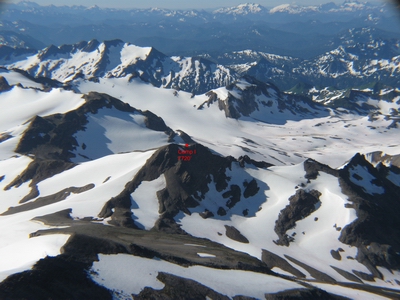 You could go to Mars without seeing more exotic terrain. 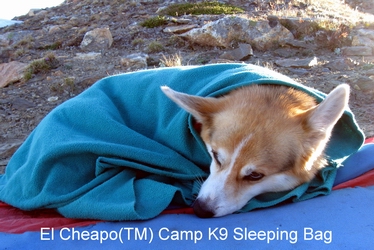 If he ever sees photos of Bev Levy's RV, he's gonna pee in my boots.

Scenes of past adventures, seen from our high point (a low-resolution pic):

Camp II, all the pressure's off, one more day of playtime ahead.  This is just above the very old Foam Basin sheep trail.  Perhaps Al senses the ghosts of herding dogs long past. It is even possible that this bare sandy spot at 6400' is soil damage from sheep overgrazing in the early 20th century (one of the reasons for the establishment of the US Forest Service).  The red dot marks our high point on Glacier Peak: 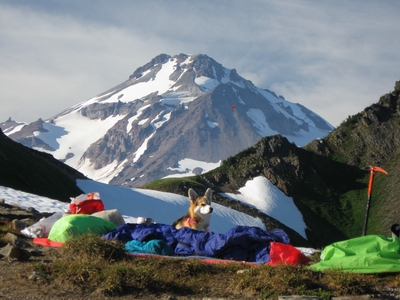 We still have one full day of perfect summer weather ahead of us!  Unable to leave, we'll wander aimlessly over to Red Pass, climb Portal Peak, and wistfully gaze back at where we've been:

Al still wants an RV.  With a refrigerator, air conditioning, and TV.

Come to think, he may have a point... an RV would have cold beer, right?

Sparty and Izzy want Al to know he is welcome in Michigan any time!

What a great adventure!  I'm sure Al loves the treks with you....maybe he could just vacation in Bev's rv.......(or retire there?)

I always enjoy your photos, John!

Scout, Summer and I are pretty impressed, John!  Summer went on her first camping trip a couple weeks ago--we were at 8,000 feet, but we didn't climb there, our 4-Runner did!  We were in the "luxury" of a tent trailer.  Summer thought the wilds of Idaho were exciting, but a bit scary.  She stayed close to us, helped us catch 6 nice trout.  We had a bear visit our camp in the night, but we didn't know until the next morning:  a nice footprint on the back window of the car (where we smartly stored all the food)!  Old Scout stayed home, he is getting very crippled with arthritis, poor guy...