Can anyone tell me about the temperament of your Corgis from Poso Creek Farm? Also, how easy or difficult was the process of getting a Corgi pup from Poso Creek?

Our corgi Pico has been an amazing calm corgi, she does her zoomies, and barks if someone comes to the door when inside, but she has learned "inside voice" and will just softly woof after the first set of barks. Very affectionate and loves to play, but not very rambunctious. She has worn grooves in our back yard however, the back of our yard abuts a park where people walk dogs along our back fence constantly, so that ends up being a lot of barking and running in the back yard. Overall one of the most well mannered dogs I have had the pleasure of interacting with, and it happens to be mine, which is a bonus. Kim Beachler was a joy to work with, the actual location is a bit out of the way, but we drove all the way down from San Jose to pick our girl up, so it might have just seemed far for us.

One of my other friends separately from me also got a corgi from Poso Creek and had a good experience.

Our male from Kim is a handful, but he's only 2 years old. He is incredibly dog- and people-friendly, not an ounce of bad temperament. He's just a little bit of a klepto...! :)

We know several half-brothers and half-sisters through Poso. I will say they seem to have a bit of an allergy thing running in the family. Henry's paws break out if he goes outside at all now, so he requires an expensive immune suppressant med. He also was diagnosed as having mild hip dysplasia.

Kim didn't have any sort of approval process, which I found a bit surprising. I don't recall even filling out an application or anything. So I'd say "very easy" process.

Kim was nice in person when we met up to bring him home (she actually met us half-way), but she was not very timely in responding to our emails and phone calls beforehand. In the long run, not a biggie, but at the time it drove us nuts lol

Thanks for the info about the allergies. I'll keep that in mind. :)

Our corgi, Koda is almost 3. She is absolutely amazing and was extremely easy for us to train. She is a barker though (partly my fault) but she does listen when we tell her quiet. Shes good around people and she especially loves children. She needs to know everyone! We take her to doggy daycare regularly and they love having her. When we first had her she was super hyper, but shes calmed down a lot since.

I called Kim on a whim (we had a down payment with another breeder, but I was just getting a weird vibe). We originally wanted a male corgi, but Kim send me the photos of Koda and I knew I wanted her. Pick up date was two weeks away from my call. She has everyone come as a group and its first deposit, first pick type of thing. Two of us already had our corgis picked out so we were able to just watch everyone interact. Koda was the only puppy awake/running around! Kim was very easy to work with, but her farm is in the middle of no where (we are coming from Torrance)!

We met a few of the other owners from the litter and we still keep in touch with two of them. We've visited one all the way in Oregon once too. The corgis have play dates and they have the best dynamic with each other. If you're lucky maybe you'll find the same if you pick up a pup from Kim

Thank you for all the replies, everyone! You're all so very helpful! I haven't been able to find much info on Poso Creek so this is awesome! Thank you again. :)

Also! I have no idea if this is a coincidence or a sign or whatnot, but my husband and I are both originally from Torrance, CA as well but we JUST recently moved up to the San Jose area! Lol!!! :D

Not to be out done - but we have 3 Poso Corgs - and they are all VERY WELL tempered members of the family though amazingly different.  Max is the oldest at 6, and he's been a mellow cream-puff since day one.  We have always had four dogs so he joined an existing pack of a spaniel and two retrievers.  We were very impressed with Kim and her approach (Poso's owner) and how careful and selective she is.

Max is a trained and registered gentle-touch service dog - loves his official vest and actually acts proud when he has it on.  He literally carries himself differently - no slouching, drooping, sitting casually.  But that took a lot of work and a professional trainer - but the result after a year is awesome. 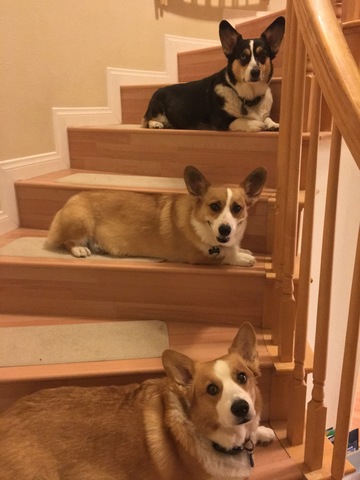 Two years later we lost our old cocker, and we went back to Poso for Sonic - the black one with a blue eye.  Kim offered us a discount because the merle eye meant non-show quality.

Sonic is the alpha - as we came to quickly learn that Corgi females are dominant.  This also extends to her approach to the humans in the house.  She demands attention and couch cuddling and every morning will bark until she gets a tummy rub.  Bark, roll over, bark, wait, repeat - it stops when the tummy rub begins.  Every day, very goofy.  Her only negative traits is she is a cat chaser - and we have a bunch of them so she's constantly challenged though she has NEVER even growled at the cats.  She just likes the idea.

Rounding out the bunch is Bear, two years old this month.  We lost a Golden to cancer (age 14) and our pack was out of balance.  We needed to give Sonic someone else to play with - Max is a couch potato - and another trip to Poso brought home the energizer Corgi.

Of the three, Bear is a handful because he needs exercise - and as much as the dogs are walked every day, he's a twice a day guy.

Great with family, and loving and goofy, these are well rounded dogs.

Our only surprise is that we took them to sheep trials and they would NOT chase the sheep.  Nor a flock of geese - the shepherd said it was a trait bred out of them.  We were amazed by their gentle nature with the sheep instead of what we'd expected, but last time I checked we don't have a flock of sheep or a need for them to herd.  These three herd each other.

In the picture, Max is on the bottom step - totally mellow.  Bear is in the middle, and Sonic the Alpha is on the top step.  We DID NOT POSE THEM for this picture - they do it on their own.  Maybe it's Max who just wants to waddle over last and not miss out.

Regardless, only the highest praise for Poso Creek and Kim Beachler.

Wow, thanks for all the info! Your Corgis are adorable and it's funny how they sat on the stairs that way, haha!

Also, who are Bear's parents?

Permalink Reply by Clydell Lamkin on October 14, 2016 at 11:15am
Our Bonny is now 7. Kim raises beautiful well rounded dogs. Bonny definitely would herd if we had sheep but has to be satisfied hearing us or the cats. We had to wait a couple of months to get her, just depends when a litter is due. And yes, it is in the middle of nowhere!

Also, if anyone can shed some light on this: What was the payment process like? Does she only take cash? Are her Corgis AKC registered?

Thanks again for all the help! :)

Permalink Reply by Clydell Lamkin on October 18, 2016 at 11:31pm
If I recall I sent her a deposit and the balance when we picked up the pup. I am sure we did a check.