I should have wrote this one sooner but we had emergency surgery (we being the boyfriend) and I was running around going crazy. Anyway, Milo got adopted at the end of September/beginning of October!!!

Thank you to everyone who helped me take care of him. He's doing great in his new home and the owner is absolutely in love with him. She made a bee line to him when she went to Petsmart.

Success on the mini vacation!

First thing first, Milo was not accepted at the Atlanta Humane Society and had to spend the three days at another volunteer's house. Since that, he seems a little different--as he barks more at our dogs than he did before. I really didn't think 3 days would have changed him that much.

It was a 4 hour drive to Brunswick where we were staying. So the poor puppies were quite bored in the car the entire time. Being that they both have issues with their treats, we didn't bother to give… Continue

Almost 9 months, where has the time gone?

I just realized that Saturday, Freya will be 9 months old! Holy crap, where did all the time go? It seems like yesterday that I got her and she's still cute as a button and still terribly independent.

She really hasn't changed much in the last three months. She's a bit taller and longer but her weight has remained a stable 18 pounds even with the spay job. Once again, the Vet doesn't believe that she will be getting much bigger--she may fill out, but not that much. Either way, she's… Continue

I don't know, after the fiasco yesterday I've been seriously considering Milo. I love the boy--he's the best dog I've ever had the pleasure to be with in my short life. He's got the best personality and temperament that I could do anything with his food and treats and whatever he happened to have in his mouth and he doesn't mind my questing fingers to get it out.

But there's a catch--he's got to get along with our unaltered Weim. That's the one catch from the boyfriend, which I… Continue

I'm not frustrated at Milo at all (except when he goes to bark mode and that grates me a little bit at times.) It's more about the people I'm fostering from--they are driving me crazy. Actually, they've been driving me crazy from the get go and I was hoping it would improve but it is only get worse with time.

Initially, they gave me wrong information about what was wrong with Milo. They also told me to pick him up at the vet's office, which despite me calling they never picked up… Continue

So I am very happy to report she has stopped using the potty in her crate and the jumbo crate she gets to stay in should I have to take Milo to work with me. Freya's crate is a little more manageable for me to carry than the huge one we got for Milo. But in some way, mine is better constructed than Milo's.

Since having to quarantine Freya, which I loathe and wish the vet would let me spay her right when I asked...we have had some improvements. I know about when she needs to go to the… Continue

Milo received all of his heartworm treatments and is doing really well. I think he is actually starting to feel better because that boy can jump! I didn't even realize he could jump as high as my shoulders (I'm 5'4) and he definitely did when I let him out of his crate. I try my best to keep him calm but I do understand how he feels.

He has to go back in on the 15th for a health check to make sure the heartworms are gone--I guess? I hate his vet's office. I would rather use mine. I… Continue

2nd round of Heartworm Treatment

I truly hope it works. I love the little guy. He's the sweetest dog I've ever been around and the quietest too! So far I've only heard him whine whenever I'm not in view of him or if I'm crying. I never expected him to be so bonded to me so… Continue

Milo's Day at the Vet

Well, at some point this weekend I noticed that Milo was pulling at his stitches. He was a naughty boy but I don't really blame him, I'd do the same if I were him.

I took him to work with me to see the Vet. I brought Freya's crate as I am able to handle that better than Milo's bigger one. I thought about letting Animal Control keep him until the appointment and after the appointment as I live too far away to use a lunch break to go home. I also didn't want him to go to the shelter. I… Continue

I am one of those crazy people who have to research everything before doing anything when it comes to medicines and medical procedures. Freya is almost up for spaying--well my vet does it from 6 months and up. So, like a worrying mother--I started researching about spaying a dog just so I would feel better about my decision.

My boyfriend isn't supportive on this (his Weim is not neutered). He wants to know why I want to rush and get this done, which is the other reason I have been… Continue

Milo has been home for a week now. He's been a very good boy and frankly I'm impressed at how sweet and gentle he is with me. I didn't really have much to expect but when I saw him I felt he was worth trying to save and find a home.

So far this week, I've found out that he doesn't like having his tail touched whatsoever. He never had a carrot in his life. He's never had a kong with peanut butter and yogurt either. He is a happy boy and is always excited to see me after meals and when… Continue

What I have to say

I have to tell myself everyday that Milo is with us that I can't keep him. I can't love him totally. I can't afford another dog. I have to say this because I know how stupid and irrational I can be. I know that I would very well adopt him despite the financial aspect and just make it work.

This is what we've learned about Milo this weekend. He loves people. He loves to shadow me and if its in a place he can't go he will stay with my boyfriend by his feet. If I followed the Ceasar Milan's way of training...I did everything wrong. According to him, you are supposed to treat him like a dog first and then give him cuddles later. I'm trying to maintain pack order but it is very hard when our male dog absolutely despises him and Freya is being possessive. We have had to kick out one of… Continue

Milo What are you mixed with? 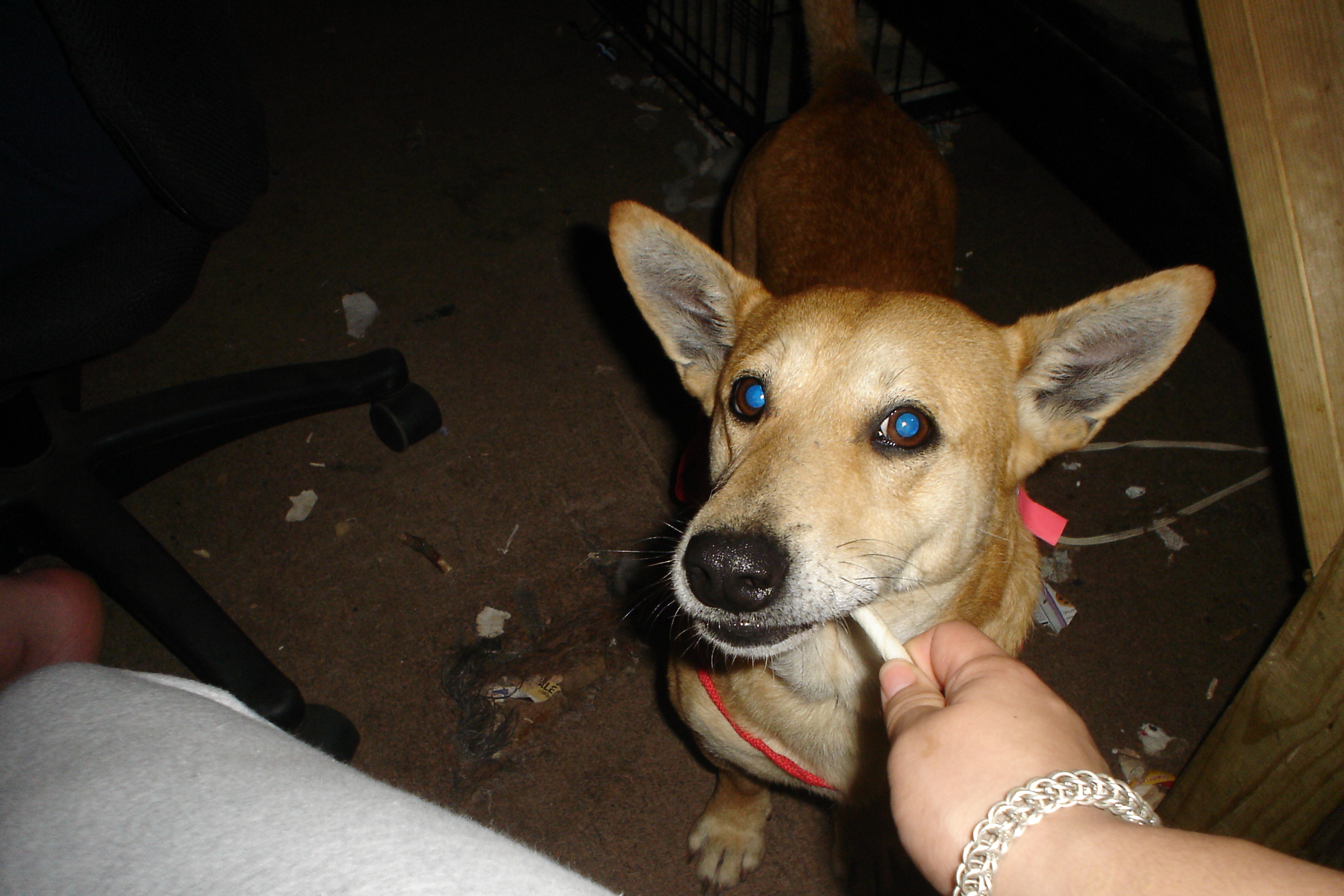 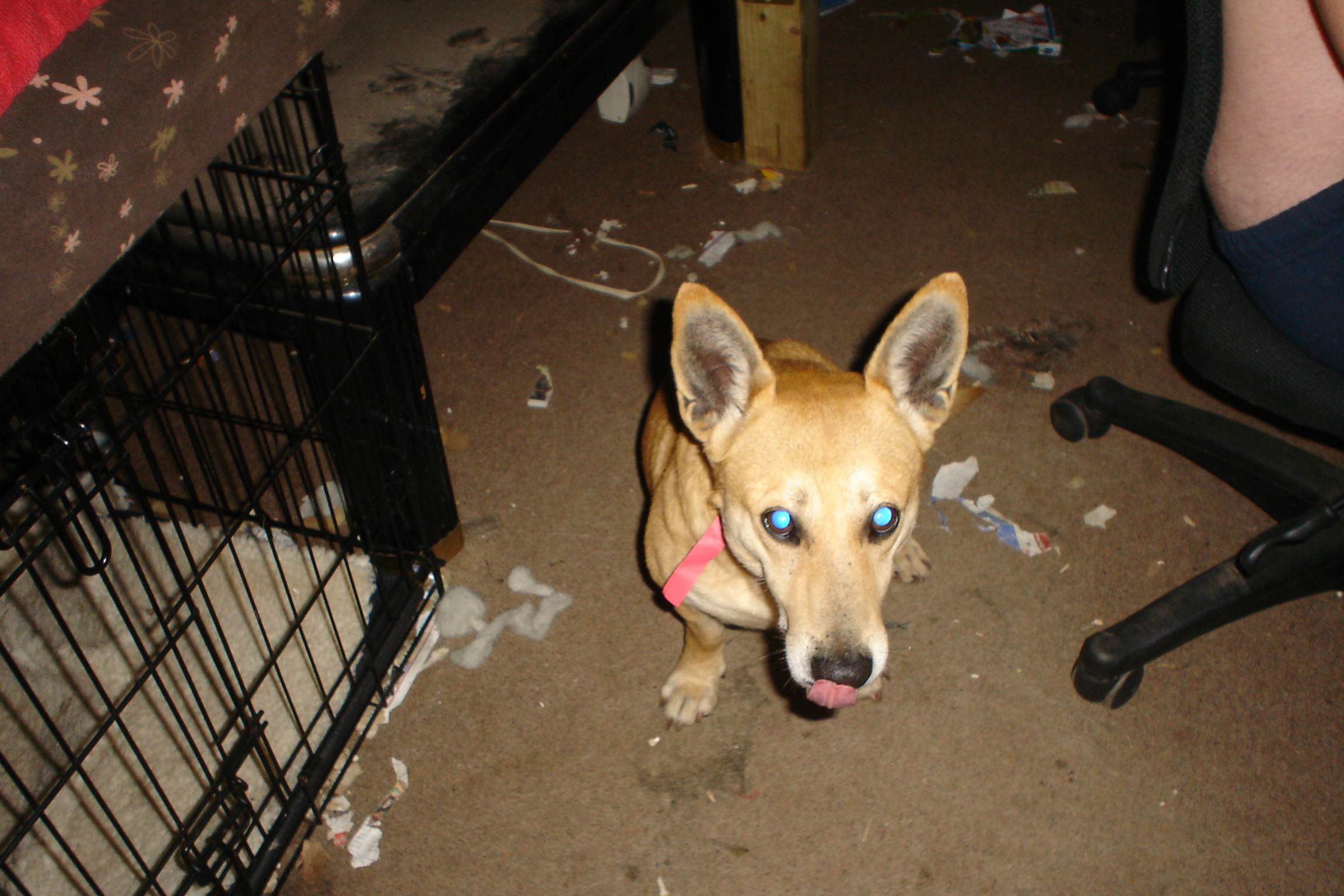 This is Milo. He is 2 years old (approximate.) Behind him is the devastation that was caused by the Weimaraner and the Freya baby. It makes naught a difference if I clean cause but a minute later they trash the house.

So here is what I have learned so far. He is infected with heart worms. They haven't treated him at all because he needs a sponsor for the treatment. I know… Continue

He may be able to come home today. An animal shelter advocate (as in he's for the betterment of the place and not making it worse) got me a crate for Mr. Milo and some food to boot! I guess I'll have to get him a collar and leash (if he didn't go to the vet with it on) and some bowls too. Right now he'll just get food in our regular bowl until I have time to go buy him something nice and durable.

I'm not sure when he'll be able to be bathed, but hopefully soon. I wish I could use… Continue

So Milo is currently still at the vet's office. I was told this morning that they went ahead and treated him with heartworms (which wasn't a bad infestation) and neutered him also.

I'm not sure when I'll get to pick him up. I told the animal control officer the name I gave him (in my head as I never actually called it to his face) and she said its perfect. She was telling me how happy he was to get attention from people (which definitely makes me think he's a true corgi) and how he… Continue

Just got a call after the health check....heart worm positive. They'll need someone to sponsor about 200 bucks. I'm not sure what that entails. I know that it is a bad thing, but still.

The animal control officer called me and told me the quarantine band has been lifted from the shelter yesterday. Woot! She also told me (just a few minutes ago) that she's taking "my baby" to the vet for his check up and if that goes well he will be neutered! I hate that she's calling him "my baby" because I don't want to get attached and I think that's what she's trying to do..the mean woman. He seems like he's a sweetie.

I'm debating on naming him. I'm afraid of getting terribly… Continue

Work in Progress--Advice or Critiques are welcomed

Outside of the potty training issue that has cropped up (which may possibly be a territorial thing *shrugs*) things have been going relatively smooth in terms of the food aggression.

Both dogs are separated when feeding. Freya goes into her crate to eat and Cloud goes in the hallway. She eats significantly slower than Cloud, and if he even steps foot in the room she will start growling. Keep in mind, she is locked in her crate so there's no way anything could be stolen. We've been… Continue

I'm waiting for it tonight. I'm waiting for the bloody vomit. I know she lost another tooth rough housing with our other dog. I only know this because a white Weimaraner can hide no evidence. Also, Freya was happily laying on her back in the kitchen while I was cooking and had her mouth open and I could see the tooth next to the k9 was no longer and bloody.

I have never known a dog to give me so many tells when she was losing her teeth before. I'm kind of concerned that she may have… Continue