I'm not sure what's up with poor KC, but every time after she eats, she licks her paws like crazy and her eyes get red. We have her on a nice kibble that is free of chicken and corn and all that other weird by-product stuff, but she's still licking her mittens. She burps a lot too after eating, but I think that's just because she has bad manners. Any suggestions? (For the itchiness, not the burping.)

unrelated to Corgis (to my fellow kitty owners)

I'm sorry it's not Corgi-related, but I need help! :S The more advice, the better, right?
Our 5ish-year-old female calico cat, whom we adopted from a shelter almost 4 years ago, is very spiteful. You may say cats don't understand spite, but you are wrong. She's very clever. She likes to pee on my stuff (blankets, couches, shirts left on the floor, etc) when she's angry. We've tolerated it because she was a shelter cat and didn't want to send her back. I've always had the…
Continue 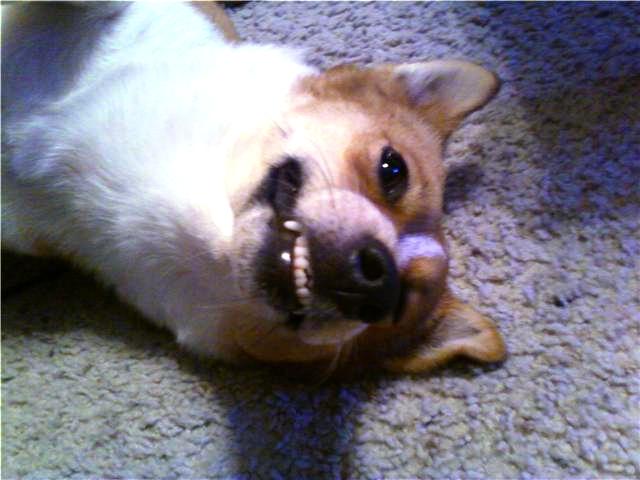 Okay, tuck yourself in! 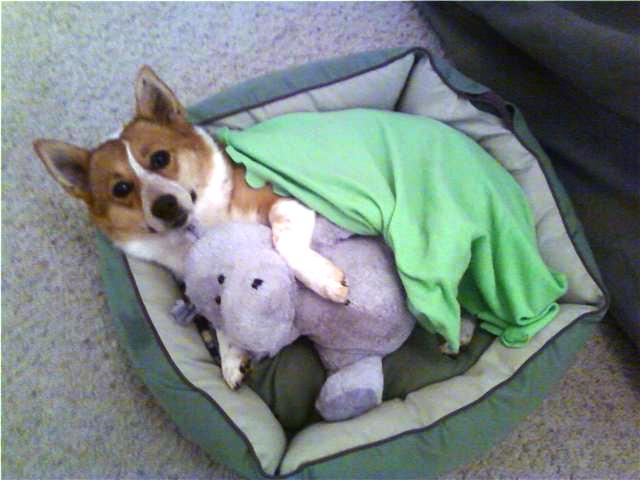 cat vs. cat and the dog's thoughts

My orange baby Walker was chasing our older cat Flossy around last night. Then he strolled into the living room with a big clump of her fur in his mouth! I couldn't even get a straight picture, I was laughing so hard. 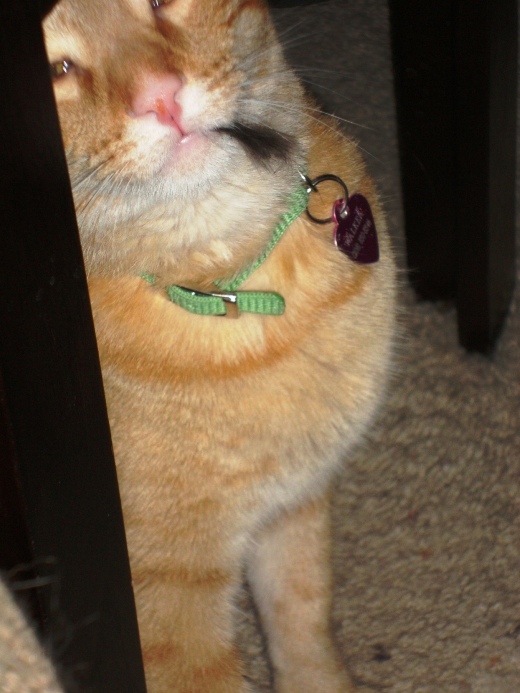 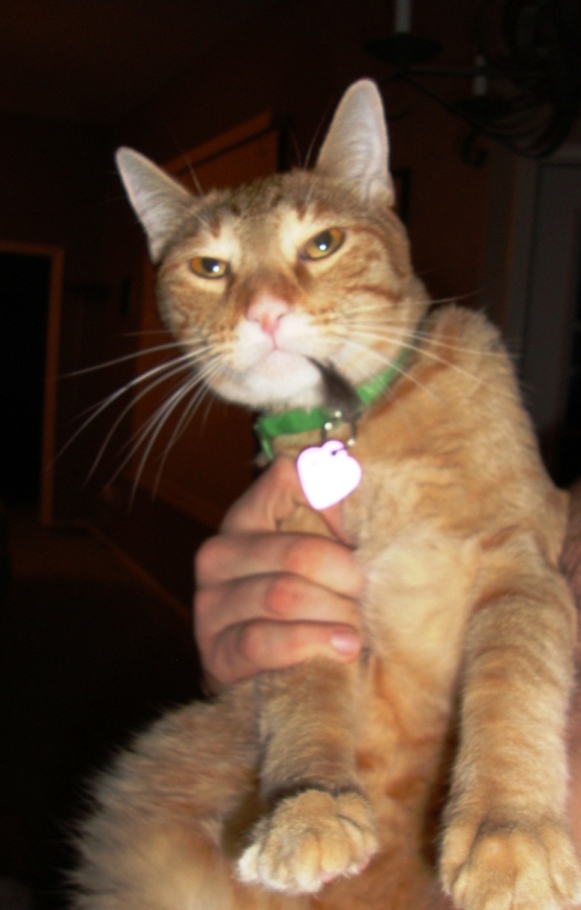 And KC's thoughts on the whole thing.… 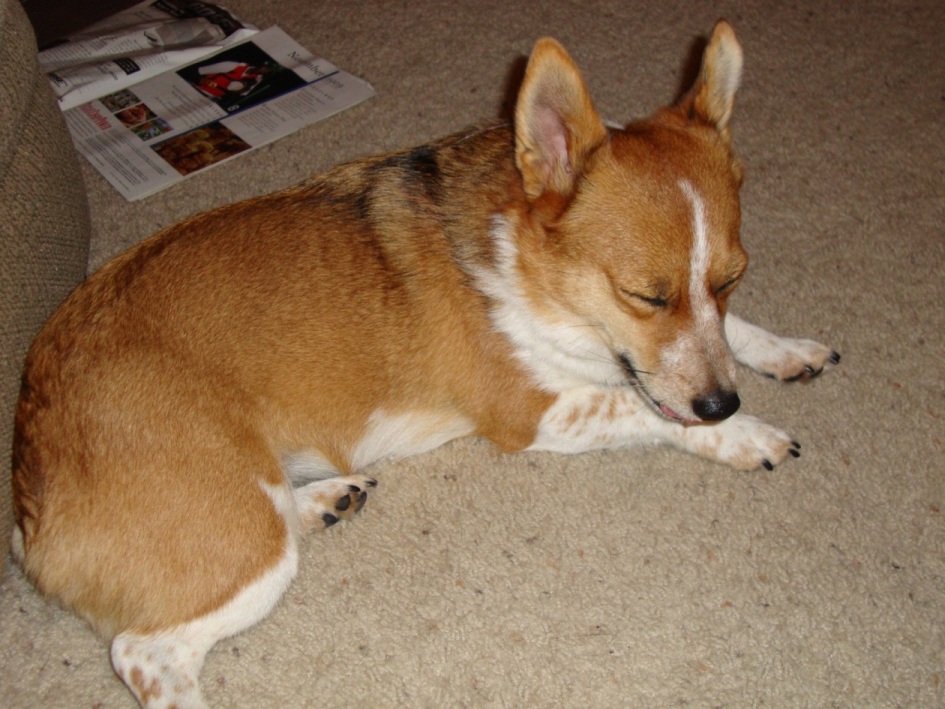 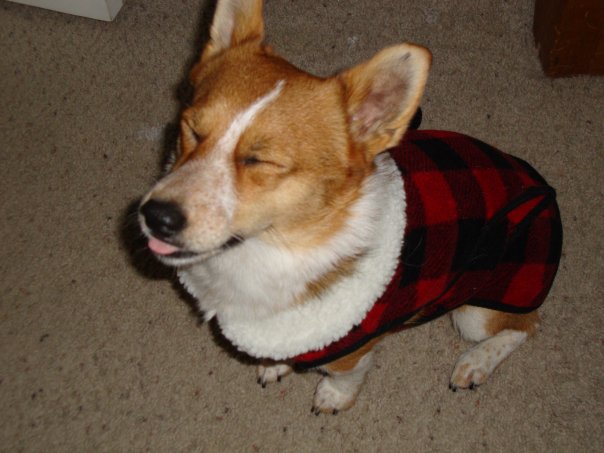 ...But I loves mah new schwetter.

i shall call him medium me 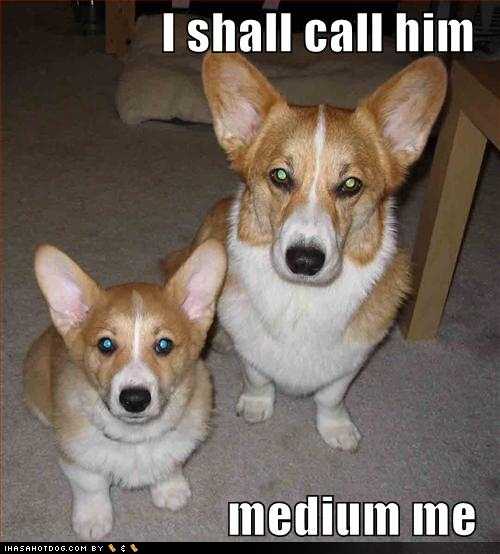 not much of a guard dog

The other day, my husband and I were trying to train KC to "Help me!". So Brian wrestled me to the ground while I yelled "KC help!" (through my stifled giggles). She just sat there and silently watched. I was hoping that she'd at least run around and bark at Brian to let me go. Good to know that if I ever get attacked by someone, KC will be a good witness.
Now my husband is away for a few days, which makes me uneasy being by myself at night. It doesn't help that KC keeps looking into dark… Continue

what color is KC?

Okay, this will probably seem like a dumb question to most of you, but what color is my corgi? I think she is a sable, but I could be wrong. She's mostly red but her back has a distinctive saddle that's darker, like the tips of her fur are black. Hopefully you can tell by my picture (more on my page of course)... Just wanted to double-check. :)… I found this cute site that specializes in Corgi clothes. http://www.corgiclothes.com/
I have already found that KC's chesty shape makes it hard for some clothes to stay on.
The "Snooty Bitch" screenprint tshirt is my favorite! But I think $20 is a little more than I want to spend on doggy clothes right now. ;)

peeing on the floor

Does anyone have any suggestions as to why KC is suddenly peeing on the carpet? It's not a lot of pee, just a little puddle, and I know we take her outside to potty frequently enough. She's done it 3 times so far (twice at my husband's grandma's house and once just now at our house) but we never see her do it. We've had her since August 15th, and these 3 accidents have happened since this last weekend. (She's 2 years old FYI.) I think she knows she did something bad, because when my husband… Continue

KC is still pretty new to us, but she hasn't been eating as much as I'd like her to.
For one thing, whenever I put her food bowl down after filling it, both of our cats run over to inspect & try to steal. I have to intervene and literally guard her bowl from them! I'll stand nearby for a minute or two shooing the little thieves away until they skulk to a safe distance. Last night I caught my boy Walker eating her food while KC sat pouting nearby. I scooped Walker up and took him to… Continue

We're taking KC's spay stitches out tonight! Well, hopefully my husband will do it while I hold & soothe her. I get queasy with medical stuff. (Our vet said we can do it ourselves.) The stitches look great right now, so there shouldn't be any problems.
If her tummy still looks great this weekend, we're going to buy a life jacket and take her to the river! Should be fun! I've been looking around for doggy life jackets, and Walmart's are only $14.74 for her size. Petsmart's life jacket… Continue

new girl could use some tips!

I just adopted my Corgi from a wonderful rescue woman in Graham, TX on Saturday. I had to drive 4 hours there to pick KC up, but it was so worth it! The drive home was pleasant too. Once KC calmed down a bit, she snuggled into the passenger seat on her new blankie and enjoyed the ride. She has the sweetest disposition too. I've never met such a cuddly loving girl before! She hasn't barked, whined, or had a single accident yet either.
She's about 2 years old and could definitely use some… Continue