I have been toying with the idea of making an altoid first aid kit for outings with Becca. I've checked online for suggestions and have some basic ideas for what to include. I'd like to merge them into a kit for people and dogs. It will be used for everything from the beach to hikes.

tweezers or small knife including…

We are off to the Mayflower Corgi Trial tomorrow. Monday is open to all breeds and Tuesday is Corgi only. I'm looking forward to Tuesday. It will be fun to see all those fast little dogs. I wish I could attend the rest of the Mayflower events especially herding. I saved my two personal days all school year for the agility days. It's so difficult to make mid week events.

Wish us luck. Becca could get her AKC novice title to go with her CPE level one. I'm a little worried about the…

As we are digging out from 6-8 inches of snow this morning, Becca and I would like to wish everyone a happy first day of spring. I was shocked to get a snow day off from school today, it was supposed to rain. Becca has enjoyed my day off by playing in the snow, walking with some doggie friends and now having a snooze.

My ipad won't let me put an image on the blog, so I'll add it to photos.

Becca had her herding instinct test and first lesson today. We went to Little Dove Farm in Appleton, Maine. A friend from agility class went with her aussie as well. It was very comprehensive. Suzanne began with a lesson with us (handlers) using one of her dogs for example. She cut three dog trained sheep out of the flock. Explaining what she was doing and what should be expected of the dog.

Then she worked with each of our dogs in a 30x30 pen. The dogs were on a long leash giving her…

I got a scare this afternoon and was ultimately proud of Becca. We were walking by the river, she was off leash. Becca ran around a tree after something gray, I thought it was a squirrel. They looped back around by me and ran up a hill, it was a gray fox kit. I about had a heart attack and immediately called for her to come. It took four "BECCA COME" (10-15 seconds maybe), but Becca came flying back. I praised her to high heaven, treated and leashed.

This is the one area in my…

Becca got her Rally Novice A title today! It was a very difficult venue, the pulling barn on a fairgrounds. There were horses on the track, swallows swooping, roof noises, and best of all horse manure mixed in the dirt. The judge was lenient and we scored a 94 and third place. We are entered again tomorrow. I need to decide whether to go, or scratch. She is not ready to move up to Advanced and it is an 80 min drive.

Rally went so much better today. I made sure to arrive closer to our class time, and left Becca in the car when I got there. I brought her in about 45 minutes before the we went in the ring. She seemed more at ease today, but still unfocused. We played the name game, every time she looked at me she got a smidge of string cheese. Both strategies worked. We scored a 90 and first place! Even more important, we had fun today.

Two legs down, one to go...I will post some better pics when my…

Becca and I both survived our first rally trial. We just barely qualified with a 73. She was much more interested in the floor than me.I lost many points for tight leash and luring.

I got there early to let her acclimate and to be sure to get crate space. I think It worked against me. She was pretty fried before it was our turn. There were some reactive barking dogs there and she got stressed whenever one of them started. There was one in the row of crates behind us.

What an experience yesterday. Becca and I went to a rally practice match, our first. It had high points and low points. Low points I got sick and Becca blew me off on our first run. High points, everyone was very helpful and welcoming, and our second run went really well.

I have a couple of questions for people who have competed. How do you keep a corgi from vacuuming the floor? On our first run Becca was far more interested in sniffing the floor than in me. Also how do you deal with…

Well, the positive training is making an impact. Becca, Mokey and I have been training together daily. Becca hasn't snapped at Mokey this week, and only lifted her lip a couple of times. I had to take this picture with my laptop. It would have ruined the moment if I had gotten up. They are not cuddling by any means, but they are sharing space.… 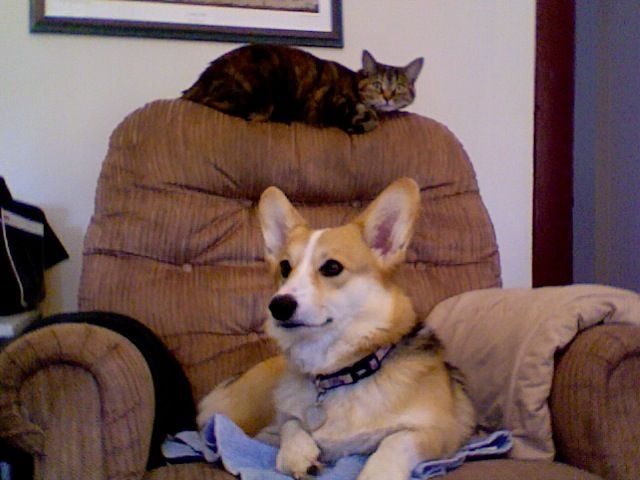