I finally have the time to introduce my little champ to the site! I am officially a corgi-owner!

So this is Spartacus, he is now 8 weeks and 3 days old! My boyfriend and I picked him up on Saturday, and boy was it a hectic day! So when we got home, i tried walking him outside to get him to go potty, which he actually did! But poor thing was so nervous, he was trembling with confusion, and maybe fear? We then brought him inside, and let him roam around and explore the house a little bit, my favorite part of having a puppy is how mischievous and curious they get! Sure enough though, the first room he got in, a little yellow water came out of him. I think he was too excited about the TV (wow a weird thing that makes noise!). So we immediately took him outside and let him roam and explore around in the backyard (with leash).

My Georgetown grad of a boyfriend suggested that I should take him off the leash for right now, so he can feel free to roam around. My gut instinct was telling me "no, i shouldn't, he might fall into the pool.." and sure enough, he did! the little tyke went towards the pool, sniffed it, and dove right in! he plopped in, went belly up first, and struggled to get out. My boyfriend thought that he could have swam, since my bf's previous puppy experiences were all with newfoundlands a.k.a. the olympian swimmers. I was so terrified, and I was about to jump in and get him, but luckily my boyfriend's arm span is much longer than mine, and he fished him out. we then quickly rushed him in and bathed him, but poor thing was trembling and shaking, i'm sure he was going to hate me forever! night-time, wasn't a breeze either. he woke up probably every 45 minutes or so, asking to get out of his crate

Day 2 i spent playing with him and coddling him all day (which i think ended up being bad in the long run, cuz now he can't detach himself to me!) and he only woke up 3 times to go outside. Day 3 was excellent, we took him to the vet, he behaved very well, and was such a ladies' man. he was on schedule for everything, and has already figured out that he needs to go outside to do his business. in total, we've only had 4 accidents in the house, and they were all #1, not #2!

so through this whole entire weekend, i felt that it was just way too hard to keep my attention on him 24/7, so i thought it might be wise to maybe fence off a portion of my backyard, and put a kennel in there. so that's what i did this morning, and he absolutely HATES it, he's been whining and whimpering (and eventually barking) for the past hour now. I really hope he gets used to being outside for maybe 6 or 7 hours a day.

Is it cruel to keep him out there while I am away at work? My parents are retired, and live with me, but they don't have the energy to take care of a puppy. The most they can do is put food in his bowl at a certain time. I do live in Southern California, so the weather is constantly nice and warm for him to play outside. But in the long run, would this negatively affect the way he behaves?


and now, onto some pics! 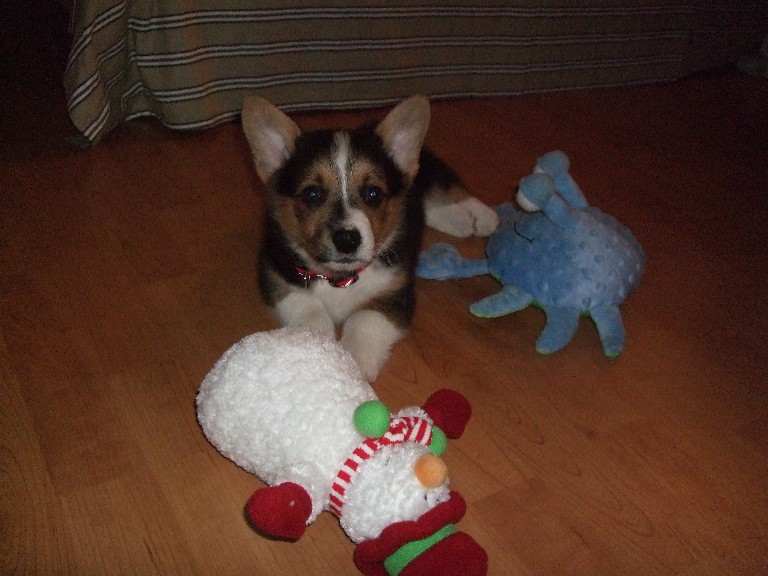 i love it when they sleep on their belly with their legs up in the air like this! 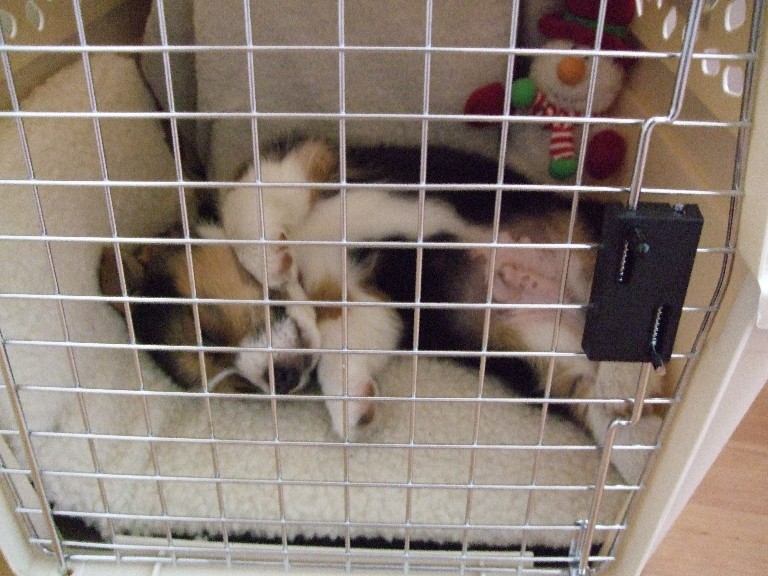 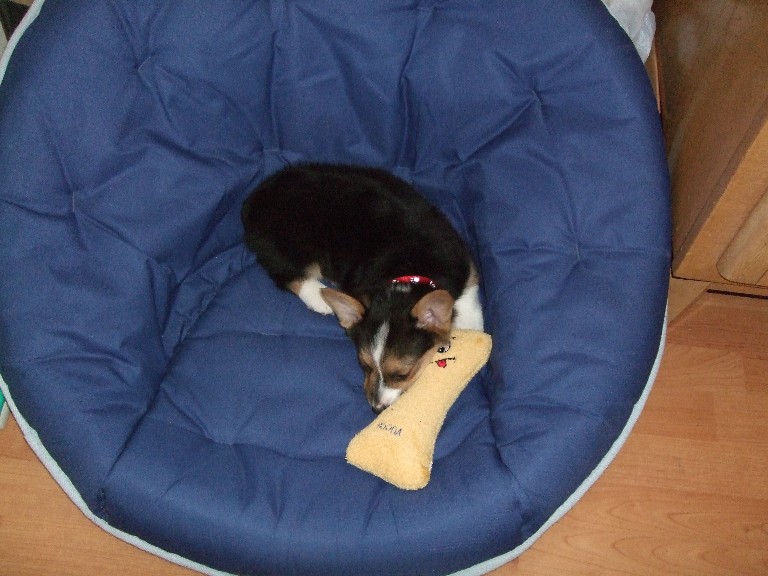 Comment by Sylvia & Timmy on April 22, 2008 at 10:52pm
The first few months are critical in developing a life long bond with your corgi. Until he's learned all the household habits, rules, and feels comfortable with his pack, I wouldn't suggest leaving him alone outside. Perhaps your parents could be encouraged to help out on ocassion. I can't imagine that anyone could ignore his good looks, charming personality, and lovely voice! LOL

Comment by Sam on April 22, 2008 at 6:14pm
To help socialize a pup it would not be a good thought to leave him outside. It appears early in your post that he is not used to the usual household noises and has become quite fearful of some very normal things. It would be best for him to have a confined area in the home where he can become familiar with the people and the noises as well as the routine. Corgis are not happy spending that much time totally alone, especially if there are people there. He is young, lonely and needs to become a part of his home and family. He will learn the "ropes" of your home much more quickly being a part of it.

Comment by Karen & Bailey on April 22, 2008 at 4:13pm
maybe you can gate off an area in your kitchen so he'll feel a little better since at least hell know he's around someone (your parents)?. I think leaving him outside will turn him into quite a barker!

again, i must say how cute he is! hahaha i call my bailey a ladies man too - but then again hes a everyone man cause he has this thing about him where everyone goes ga-ga over him everytime we're in public. =P

have tons of fun!

Comment by Ginny and Diggory on April 22, 2008 at 4:03pm
He is such a cutie! Do you have a little den outside (kennel or doghouse) that he can go in when he is sleepy? He might feel more snug and safe if he has a little retreat like that to nap in while he is outside during the day. Puppies especially like to feel cozy and he might feel a little more secure. It sounds like you have a real charmer. Congratulations on your baby!

Comment by Sam Tsang on April 22, 2008 at 2:14pm
Congrats! he is adorable! the down side of being outside all the time is it'll take him even longer to be house broken and potty train.