Just after a weekend of rest (a much much MUCH needed rest at that!) Baxter and I were back out competing at another trial. This trial was closer to home, but the travel to and from was very taxing. We are definitely learning a lot when it comes to which trials to chose in the future!

Open Standard - A very nice course except... uh oh! Tunnel/A frame discrimination? It's like the bane of our existence! We got called for refusal as my lateral distance pulled him around the a frame. Thankfully that kept him from taking a wrong course into the tunnel. *whew* Very clean otherwise! Qualified with a 95 and took first place!

Excellent A Jumpers - Our very first try at Ex A. I was so excited to see such a fun, flowy, and fast course! That's when I noticed something. A challenge. A challenge I wanted to try so badly-- layering the weave poles by sending Baxter out to the jumps just past them. When the time came, Baxter came out of the tunnel and I pushed him to the jumps, staying on the other side of the poles. It was so beautiful. I couldn't believe it. But then he never came back. Well, I guess that's to say he did come back, just not over the correct jumps. =( NQ'd, but totally worth it. I knew he could do it!

Excellent A Jumpers - This course was the epitome of flow. The most awesome part of this course was that our gamble in the previous Jumpers course repeated itself and this time we totally got it right! It was really nice to know that Baxter would be able to do some great distance work. It was a very very very nice run. 100 Q First place!

Open Standard - Awesome run! Nailed the dogwalk/tunnel discrimination! Everything was great until the very end. Baxter popped back through his tunnel entrance! This happened before in Palmetto. Very strange! We quickly fixed the problem and got him back in and through it and off to an Open title, first place, 95! Out of Open and on to Excellent A!!

Excellent A Standard - Q'd! 100! First place! Very fun course, but I messily handled getting Baxter to the table. He was so confused, he almost went to the dogwalk. then tunnel, then jump, but thankfully never crossing the plane of the table to get called on a refusal. Need to handle him better!!

Excellent A Jumpers - I felt so weird about this run. Baxter wouldn't (couldn't?) concentrate at the startline. He wouldn't even sit for me. I should have take my time and tried to reconnect with him. It didn't work. After taking the third jump, he had a little wrong course, which we fixed. We were back on track and I just felt like we had "NQ'd." Still not sure if the judge had called that WC. I took the last four jumps staying on the same side instead of rear crossing. I think I caused Baxter to drop a bar. =( Very sad. NQ'd. It was such a fun course and we did so well after getting past the third jump. So close! 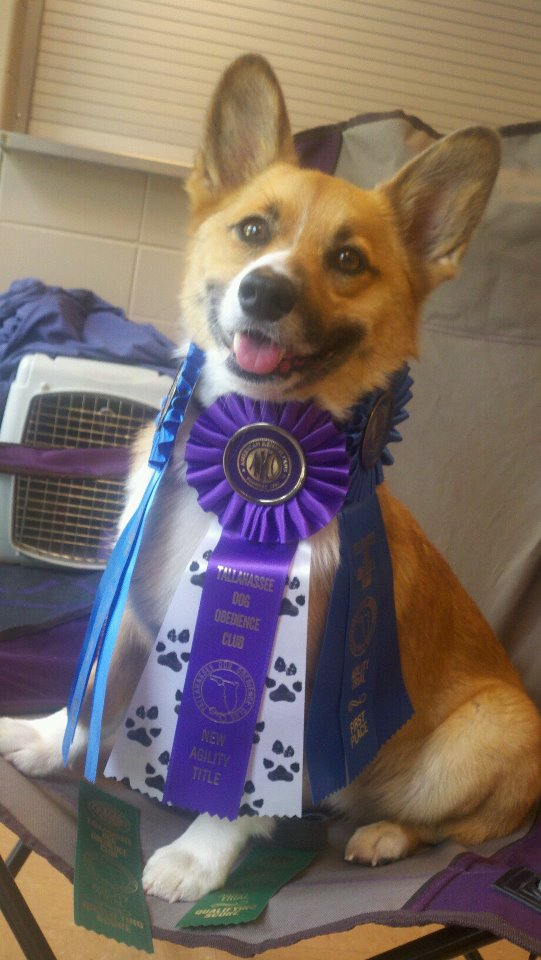 Just two more Q's in both Standard and Jumpers until Excellent B!! Very excited!!!

You and Baxter are both doing wonderfully.  Good luck in the future.

Go Baxter! You guys are an inspiration! I love watching your videos-- you're a great team.