WOW!  What a difference a couple of days make!

Yesterday morning, Jack didn't want much to do with Felix.  Felix wanted to play so badly, but Jack would just growl when he got close and moved away from him.  After lunch, I went out to run a few errands (mainly getting more doggie supplies!).  When I returned, they were both really excited to see me, and all of Felix's jumping around suddenly inspired Jack to play!  They ran around together for several minutes - Jack LOVES to chase, and Felix loves to run.  A great match!

This happened more and more throughout the afternoon.  Felix was doing the same things that made Jack growl before, but now Jack was responding in a playful way!  The two of them are evenly matched in the wrestling department, and there doesn't seem to be any aggression at all when they play.  A beautiful sight!!

We took them to the dog park last night, and Jack was pretty apprehensive at first.  He started his growling at other dogs again whenever they attempted to play with him, but after about 30 minutes, he was much more comfortable. 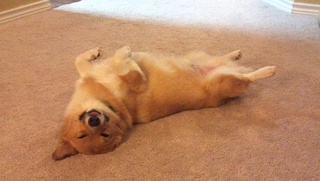 He ended up running around with another owner and his dog attempting to herd the two of them. We had our awesome community of corgi owners out in full force - 6 corgis at the park!  I think that after he gets a little more comfortable with his surroundings at the dog park he will be fine.  To my knowledge he has never been to a dog park - there is not one in the community he group up in.  After the dog park, both were EXHAUSTED!  Jack ended up zonked out rolled over on his back in the middle of the living room.  I think this is a big sign that he is comfortable in his new home! 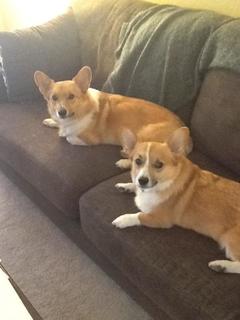 I have been really careful not to allow them any treats unless they are separated.  Earlier today, I had to leave for a while, so I locked them each in separate locations with their respective chews.  When my husband came home, I don't think he noticed there were chews in with them, so they both had access to them.  To our surprise, they both started chewing their own chews, and then, as if they had talked about it, they switched chews!  No aggressive behavior, no jealousy at all.  Really impressive!  It seems like if one has something the other wants, they just kind of go sniff at it.  There is no growling or fighting for the item, even when it's food.  This would have been an enormous issue 2 days ago.

Toys were another thing I had been really careful about up until this afternoon.  We didn't have any toys lying around for either dog at first, but now we're feeling comfortable pulling them out.  They have shared a couple of balls, although Felix knows how to fetch while Jack does not!  It's something we'll have to work on a little bit individually with Jack.

I am amazed with how fast this process has gone.  I thought it would be weeks before they got to this state.  I guess it goes to show that every dog is a little different when it comes to a new environment.  We still have a few issues with growling coming from Jack, but overall things are going amazingly well.  We are so happy with how these two have bonded so far!