There is a lot going on with Ziggy lately. I regrettably stopped doing a Happy Month Mark post for Ziggy since Skittles passed away.. It just hasn't felt right on the eighth anymore to celebrate, it leaves a hole in my heart to even acknowledge the day, but I know that Skittles wouldn't want me to put anything on hold, not even something so small. He had no concept of time, and it wasn't the day's fault, so why even let it keep me from updating on Ziggy's progress.

First off, I would like to say how proud of Ziggy I am. He is still coming more and more out of his shell, and he is even learning a few commands! Slowly, with lots of treat rewards,and only basic tricks right now, but it is a large improvement over the dog that would act like I wasn't even talking when I was trying before. He has sit down and has had it down within minutes of our first-successful-training session. Previously before this session he would just plop down on his belly if I didn't give him the treats right away and would act completely disinterested. Now he tries for it, and it seems that once he gets something down the first few times, it really clicks! So, since he is a pro at sit, we moved on to down. This one was a lot more complicated, and I had to spend a lot more time physically putting him in the down position than I did with the sit position. He got a TON of treats out of this session (and I've decided against giving him a lot of treats and replace with mostly kibble, only alternating to treats every tenth trick or so) and we must have been practicing for twenty minutes straight before I held the treat from him for a good five minutes... He went into the down position on his own (out of laziness) so I said in a neutral voice Down. as he was settling in and then quickly gave him his treat and praise.. It was like watching a lightbulb go off and he laid four more times (with a few derps here and there where I had to physically remind him) on command before ending the session-on a positive note with an awesome Down... After this, Down got a lot easier. He now has it down 100% of the time, and I've moved on from giving him a treat after every trick to giving him a treat ever three tricks. He's not too thrilled at that, but it does the job.. Oh, I almost forgot that he has Speak down as well!! And lastly, Shake. This one was really simple because he gets really excited over treats and will lift his feet to paw at me and so I started just grabbing his paw and treating him, saying shake :) He picked it up in no time!:) I was really worried that this would be really tough since he is so low to the ground but he made it a breeze! Such a good, smart boy! I'm having trouble deciding what trick I want to move on from here.. I was thinking Spin but I cannot for the life of me get him to turn around in a circle, even guiding with a treat-he will just plop down and follow the treat with his eyes, flopping his head from side to side, trying to get a better view... Any ideas?

Since bringing Ziggy home, it's been on my checklist to take him to an obedience class. After spending more and more time with him, I'm unsure if that is such a good idea to start off with. He's nervous being outside of the house, and even shows signs of anxiety being out of our room alone. I have been trying to get this kinked outta him for a while but it has made me start to wonder if I should put him in a socialization class before taking an obedience class with him, to let him get used to being around other dogs without actually needing his attention because when he is nervous, he won't focus on me or a treat or anything other than what is making him nervous.

Speaking of dog interactions, Ziggy has played! I didn't manage to get a video of it (so sad) because I was way too scared of the play session stopping before I got back into the living room with the camera, but it was the cutest thing I've ever seen! Makes me extremely happy, and excited to add a second Corgi :) Gives me confidence that another dog could be a good influence on him to get up and move-just gotta find one that is playful but not overly hyper towards other doggies... That's quite a ways away in any case, but now I have that much more to look forward to :) (And maybe I'll get my walking buddy outta the deal too-what a win-win situation!)

He has also started to play with toys :) After recieving his gifts I've been able to pull sneakies and, during his playful moods, switch my hand with his new, stuffless squeaky raccoon toy... We played a bit of tug-o-war, the pulling on my end very loose.. You can tell he is waiting to drop it at the first sign of being told it's not okay to play with it.. But the more I manage to switch the toy out, the more he starts to tug back and squeak the toy :) Maybe he won't ever really play, and that would be okay, but I really hope that that's not the case, and have a flicker of faith that it won't be :D (Maybe this is another something that second Corgi can help out with hehehe!)

His fur has been changing somewhat.. I can't tell if it's just thickening or if it's getting a bit darker, or both... But it's getting cold here so it seems like it should be normal! I love his coloring, it's like he's a pumpkin in the right lighting.. Such a handsome guy.

He's been being a butt nugget about going poopies haha-stopping before getting on the grass and pooping on the pavement! The butt nugget.. Pretty sure he's just not happy with how damp it's been lately lol... Poor guy shall be in for it when the snow hits! I'm gonna have to invest in some doggy booties :) (And yes, record his humiliation while he gets used to them lol.) Though I am worried that he may refuse to move---as he does with his cone. Plops down and that's it haha.... But I'm sure that he would rather deal with the booties than the freezing temperatures. I would at least! I will have to dig the snow outta his way so he can go potty without it touching on his poor man parts haha.. I hope that he won't mind it too bad... I'm sure he'll be okay since there are other doggies around here that get by just fine haha.. But I want to make it as comfortable as possible.. After all, doesn't get so cold in OR and that's the coldest we've each experienced!! If all goes well, we won't be here by the time winter rolls around next year, but I'm unsure, as I the job I got here is a really decent one, especially in comparison to what I could have gotten, like being stuck in retail or a fast food joint. (Something that requires decent customer service skills..) I like that I can pretty much keep to myself haha..

I cannot wait to get Ziggy back on Eukanuba Salmon and Rice formula :D He loves it and it's actually good quality haha :P Plus his fur gets toooo soft and silky!

I am so proud of Ziggy, he boggles my mind more and more, day by day :) His cuteness never fades any, every time I look at his face, my heart beats slightly different than it normally does, just like it did for Skittles. I love my family, but in all honesty, it just doesn't compare to what I feel for my furbabies.. Seeing Ziggy every day and feeling the feelings that that brings me, I just can't understand how three other people (two it seems, one for sure willingly) let him go. It's almost like he isn't there at all, other than the fact that you need to buy dog food every now and again :) Doesn't enjoy walkies, so even the laziest of the lazies could own him-and hey! Just so happens that I do! (Haha.)

Ziggy is the best dog I could have asked for, and I'm so happy and thankful that I was the lucky person to wind up with him in my life :) 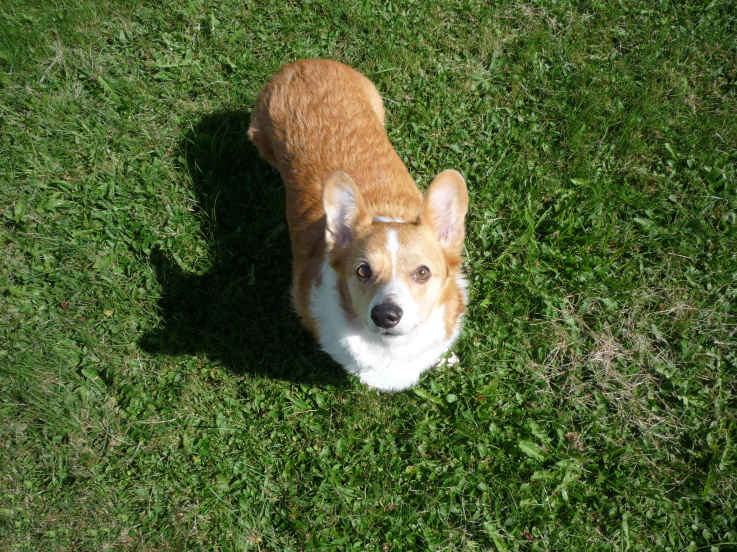 Happy eight month zigster! xD I should try doing something like that with Daisy...

Happy eighth birthday Ziggy!!!  He is a bundle of cute!!!  I am so glad he is becoming more comfortable.

You know, I think he's smarter than what you give him credit for.  I had a German Shepherd/Husky mix who REFUSED to shake.  I'd have to keep at it, and when she figured out I wasn't going to give up, would LITERALLY roll her eyes, sigh, and slowly lift her paw.  She knew exactly what to do, just didn't want to do it!

I think an obedience/socialization class is just what he needs.  Sometimes the only way to make their anxiety go away, is be a strong leader, and take them to where they are scared.  They slowly learn that it's OK, and that you won't let anything happen to them.

Glad you two are doing well!!