I'm very happy to be back home with my family and friends. We're staying with my aunt for now and I'm currently looking for another job.

Ziggy has been so-so about the situation. He's happier now that things are calmer in his space, but my aunt has three dogs (a Chiweenie, a Huskita and a purebred Pittie) and three cats (and she surprised me with one named Jax from the HSUS-not too sure how I feel about it, but I just couldn't tell her to put him back in the cages at the shelter). Ziggy REALLY dislikes the Pittie because she has no respect for personal space and is so much larger than him. I've had to pull her off of him more than once so far when she's gotten in his face and he's asked her to back off-she doesn't like being told what to do apparently.. Really not too happy about the situation myself but there's not much I can do, so I keep him tucked up in my room as much as possible when she's in the house.

On top of that.... Three children. The oldest, a ten year old, Ziggy doesn't mind, but the younger two... Well, let's just say I'm very proud of Ziggy and his restraint. I've made myself look like Medusa to these kids for swan diving on top of him (both of them on this one), swatting him, kicking at him (just the two year old for these two). So my game plan is just to play hideaway in my room with Zig until I get a job and move out.

I just wish I could let him know how sorry I am, that this was the only option for now but that I'm really trying and going to get us out of there ASAP. Not that I'm not appreciative, I am, it's just not an ideal situation for Ziggy, which really stresses me out.

I'm really hoping for one job in particular, at a call center. Keep your fingers crossed for me-this would be a wonderful step up from toilet scrubbing, haha ;)

Anyhow, here's a picture of Ziggy and his new brother Jax 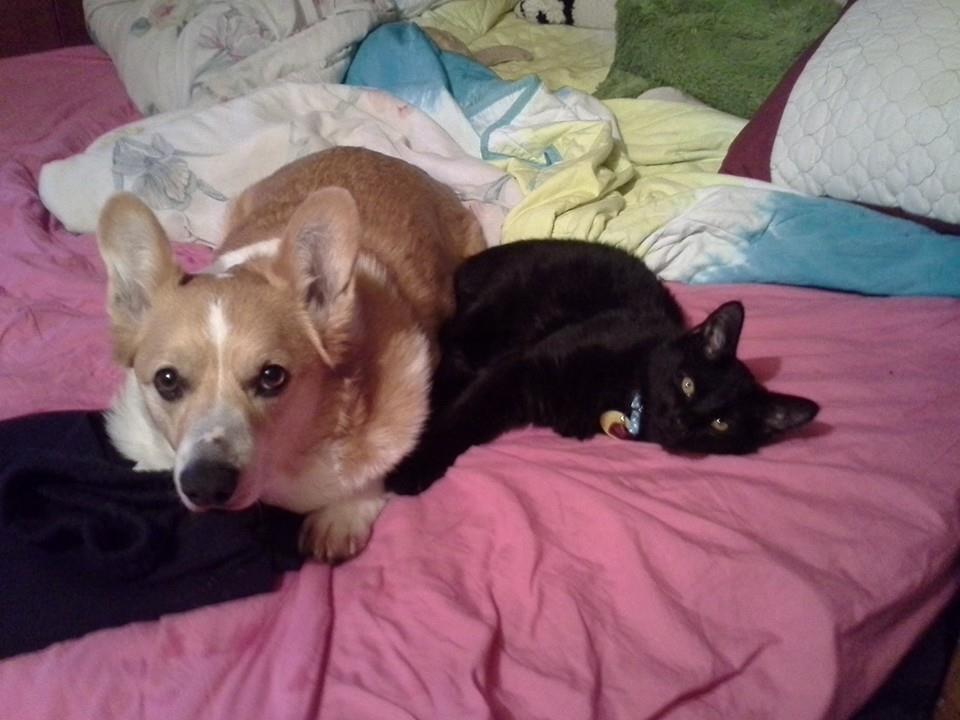 It's good to hear that you're still doing well and will soon (hopefully) be working again!  :)  Keep us updated as you can~

Comment by Zigward & Kimberly on April 28, 2014 at 12:59am
I'm so bad at replying lately! We moved out of the household and in with a friend up in Portland, and I am now looking for a job here instead-shouldn't take too long and I feel I have a better shot here where things aren't so slow.

Jax stayed behind at my aunt's, along with Nubie (new-b), another kitty addition, though the friend I live with is going to be Jax's person as soon as we move to a new apartment here in Portland. He attached himself a lot more to her and when my aunt got another kitty (Nubie) that she wound up not liking at all I begged her to keep him until I could take him as well and she agreed. Nubie reminds me so much of Skittles it's kind of crazy. He even looks a lot like him, though silver instead of mackerel colored.

Alison, Ziggy loved the snow! I have a video to post but I have to wait until I get somewhere with wifi as I'm borrowing a phone that actually has an internet connection to update hah-mine is just text and call (not even picture messaging! Everyone acts like I'm from the Stone Age when I tell them that LOL).

Linda, thanks-unfortunately it didn't happen quickly enough in Salem and when my friend invited me to come stay with her (she was spending all her time up at my aunt's anyhow as we are inseparable after getting to hang out again hahaha) I hopped at the chance and there are tons of places hiring here so it shouldn't be long at all! I know, that was my biggest concern. Him reacting as any sane dog would be expected to react and them wanting him kicked out. After the Pittie go used to me getting dominant with her when she'd get I his face she pretty muc hbegan to leave him be, but the children were still pretty crazy

Jane, he he had to spend time adjusting but now he gets along WIth both the cats awesomely(: I'm really happy at the prospect of living with them again haha.

Many thanks to everyone for your well wishes :D

Welcome back to Oregon! Did Ziggy enjoy the snow and ice we have? Noodles is enjoying the snow part, but it is awful chilly outside for him.

I hope your living situation gets better soon and that Ziggy doesn't get too stressed out (or you either). Good luck with finding a job quickly.

Lots of good thoughts on finding that good job quickly.  What is it with corgis and black cats?  Mine are either sleeping together or chasing each other.  I'm sorry it's such a crazy household...I would be very concerned about the pittie not backing off, that is not a good situation with any 2 dogs.  As for kids hitting, kicking, stomping or any other mean action towards an animal....see how much they scream the dog is vicious when it bites the kid in self defense.  Parents need to be held accountable for their child's actions but they will blame the dog instead.  That makes me very angry.  Sorry...off my soapbox.

Best of luck to you.

Glad you made it home safe and sound!  Like the pic, does he like Jax???? Jax sure looks comfy!

Glad you finally made it home!  It stinks that the household is a bit chaotic for Ziggy, but hopefully it won't be too long before you're able to get a job and settle down into a quieter environment.  :)