Ravioli is finally home, but I have some concerns

let me first preface this by saying that this post will be long, but i ask that you please read because i really need some support from the community. please!!!

and let's talk now about his leash... he HATES IT!! he is fine with his collar, and hasn't tried to get it off, but absolutely hates his leash. when i take him out on the leash he will humor me for a little while and sniff along behind me, but then after a while he will just turn into a stone and refuse to move. sometimes he'll just plop down in the grass and refuse to move. then he'll roll around and try to get the leash off. i've been trying not to tug on him, but i'll go in front of him and make sure there's no give on the leash and just stand with my back towards him without making any noise or looking back at him. he'll eventually start slowly moving forward and i start making excited noises and patting my leg to encourage him to move and he will for a little while, until he decides he doesn't like it again.. it's very frustrating! i would like to take him on a walk but he won't walk! he'll just slowly sniff around behind me and then become a stone. if i let him outside without the leash he will follow me around slowly sniffing behind me and won't stop, but with the leash he just.. i don't know! and it's also frustrating and concerning that he won't use the bathroom! he'll sniff around a lot and even sniff other dog's poo but won't go himself. after a while he just lays down in the grass and rolls around.

i just don't know what to do because i feel so worried/frustrated/depressed/upset that he won't go to the bathroom and that all he does is mope around and sleep or give me depressing looks! did anyone else feel this way? some supportive words would really help right now, i just feel so overwhelmed with all these unexplainable emotions.

and what's the best thing i can do about the crate thing? i'm sure it was not a good idea that we played with him before putting him to bed, because i'm sure he wanted to play more. i usually go to bed late (between 12-2am). would it be better to crate him in another room earlier on when he starts falling asleep and then retreating to my room until i decide i want to sleep? at least this way he won't yelp in the middle of the night waking up all of the neighbors.. and how long does it usually take for him to get used to his crate? how many nights will he yelp like this? i know i'm not supposed to let him out and i don't plan on it, but it also doesn't help knowing that everyone who can hear him probably hates me. i'm fine with going to sleep with the yelping, but others aren't.

what's really throwing me off is how his depression is rubbing off on me. all i do is worry about him!

what do you guys think?

here's a picture of him looking depressed 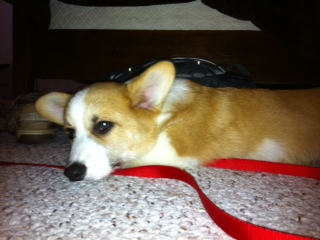 He will be mopey for the first few days/weeks. You say he is 4 months old? Has he been with his litter the whole time or was he placed and then returned to the breeder? Is he vaccinated yet? If he isn't fully vaccinated he should not be going on walks yet. For leash training, he probably has NO IDEA what a collar/leash are. Imagine somebody tying a rope to your neck and tugging you around, how would you react? Best thing to do is slowly introduce the leash. Attatch it to him in the house and let him drag it around for a while, then slowly progress to walking outside. Obedience classes will be a great help for both of you and he is old enough to start them ASAP. Its also good for socializing puppies as well.

As for the bathroom, if he isn't eating he won't poop, but as you said if he is drinking he should be peeing. Does he have any freedom where you aren't watching him? Its pretty much impossible for him to hold his pee for days so he is going somewhere, you just have to find out where. Is his crate wet? Check every room, under beds etc. And make sure he is in fact drinking. If he isn't eating or drinking he needs to see a vet. Even if it is from depression pups can't go very long without food/water before they go downhill very quickly. Ideally he should see a vet anyway since you just got him. Usually breeders have a contract where they need to see a vet within the first 48-72 hours for any health guarantee the puppy is sold with.

For crating, you have to ignore him and wait it out. Again like the leash, he may have no idea what a crate is. He doesn't want to be locked up in a room alone when he is used to sleeping with his brothers/sisters/mother. He needs to learn the crate is his safe place. Put toys and treats in there when you lock him in and if he yelps or whiines you have to ignore him. Eventually he will go to his crate when he is ready to go to bed. You've only had him a day or two, be patient.. He just went through an incredibly traumatic life change and needs time to adjust.

You say his depression is rubbing off on you, but you also need to consider how your feelings are affecting him. Dogs are very sensitive to our emotions and perhaps YOUR depression is rubbing off on him and its becoming a vicious cycle. Try playing games with him, just petting him, cuddling, treats, etc. A bond won't happen overnight but it also won't happen if you are frustrated at him because he isn't acting how you pictured he should. He can tell when you are upset/frustrated and it will cause him to withdraw even more. Its really hard, but you need to put on a happy and supportive face for this little guy. My new dog has been with me for almost 2 months and we are still dealing with a lot of issues so you just need patience. Raising a puppy is not going to be easy in any way. After raising my first corgi Franklin, I had decided its something I NEVER want to do again! I am so glad I did though becuase he is the BEST dog in the entire world, but man he was a difficult puppy!