RIP, Queen of the Universe

Cassie the Corgi left this world the day before yesterday. She was almost 13 years old and had suffered from adrenal cancer (we think: there's some confusion about that) for the past four and a half months. She lived about as long as corgis can be expected to live (the median life span is 12.6 years), and she had an exceptionally good life.

And she was an exceptionally good dog: one of the two finest dogs I've ever had the privilege to live with. 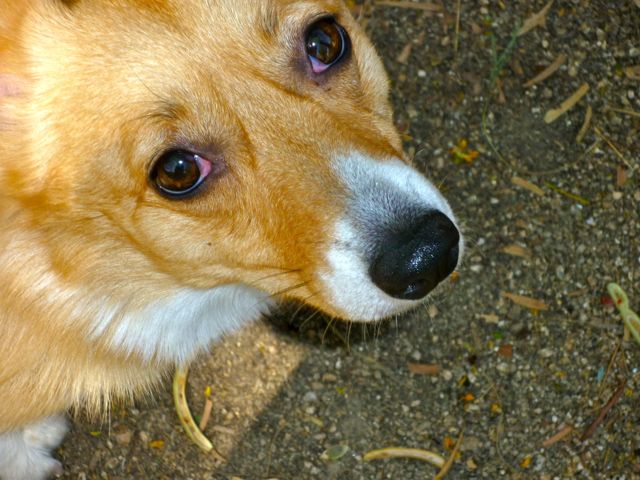 Ruby the Corgi Pup now accedes to the throne as Queen of the Universe. Though she's typically bossy, it's unclear whether she quite knows how to rule all of creation in the absence of her predecessor. She seems puzzled as to exactly the extent of her considerably expanded powers and how to manage the lowly human. She will, being a corgi, soon get it down, I"m sure.

Already feeling lonely, I looked at the site operated by Ruby's breeder. She now wants $2,000 per pup, which of course is wayyyyyy beyond my means. So unless I stumble across another rescue corgi (Cassie came from the Humane Society), I guess I'm out of the corgi game. Well, not quite, as long as Ruby survives -- presumably another 5 to 8 years.

Was pleased to see some people are still lurking here at MyCorgi.com. Facebook is all very nice, I'm sure...but I find it fairly overwhelming. Just since yesterday evening, 178 messages have come in, most of them the most pointless kind of ephemera. How on earth is anyone supposed to keep up with that?

Alison -- Sorry to hear about your Noodles. Over 13 years old is a good life span, though: that dog was no doubt happy and sassy. Beth: though 12.6 years is the median life span for corgis, many (as we know) live lots longer than that. I figure at this age, every problem-free month is a bonus.

Ruby is coming into her own, in a big way. Cassie had her a great deal more buffaloed than I ever realized...apparently there was a reason she took up residence under the toilet. In the past few days, she's been out of the bathroom den a LOT more than ever before. A couple of times she's been at the door when I came in (never did that during the Queen's reign). And she's learned to chase a ball, something than neither of them would do before. While the weather's still cool, we're doing two mile-plus doggy walks a day.

Cassie was a great dog. But...Ruby may give her a run for the money, in that category.

Comment by Alison Prasavath on January 19, 2019 at 12:20am
I'm sorry to hear of Cassie's passing. Noodles passed away on New Year's Eve and he was 13.5. I miss him so much. Harry is trying to figure out being an only child for the first time in his life. We are getting him a Pembroke brother in February. He'll be glad to have a brother again. I'm sure Cassie and Noodles are frapping with each other in heaven.

Cassie too?   Sigh... so many of the Corgis I came to know and love here have moved on to the great hereafter.  Jack is coming up on 12 this spring.  I cannot stand it.  I am sorry for your loss but happy that you got to share part of your life with wonderful Cassie, queen of all she surveyed.  I loved hearing about her.