Cindy said…
Hi Joy, thanks for the greeting. I just back from CNY and didn't feel want work yet. COCO is almost 11 months now, more naughty and palyful. She is a good dog but seems never feel full, want eat everything, even the garbarge! This is make me very headache.

Juel said…
How goes it? I hope winter is treating ya'll well. and all is well! we are doing ok.

Davlion said…
Aww, well i put a few more pictures up for Anselm and he's got that cute corgi smile going in one of them. So, I may not have him yet, but my breeder is being great! I was thinking about checking out your page too!

Davlion said…
As far as I know, Little Anselm is not a Fluffy. He's just your average red headed tri-color. Just has a left eye with a ppm but it's not connected to anything and wont effect his vision or anything. Just a cosmetic flaw as far as I know.

Sir Riley of Pembroke said…
The countdown begins a couple weeks I get a new puppy! How is butter doing? You gotta tell me how you taught him to wave I love that!

NellyJane said…
We finally got her! One more Canadian corgi!

Wendt Worth Corgi's said…
You'll notice a toolbar on the comment box right above where you type w/a green square in it..click on that green square and another little window will pop up w/browse on it..click on browse which will then take you to your folders..select folder and then dbl click on pic...your folder window will disappear and take you back to the pop up..click on add which will bring you back to the comment box..it will be in codes until you click on add comment like you would just typing me. I hope that didn't confuse you and was easy to understand. 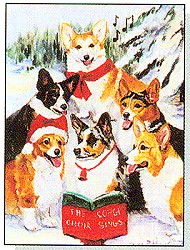 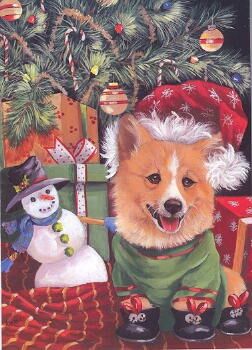 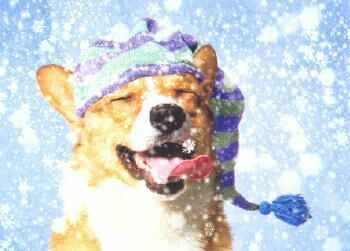 Sir Riley of Pembroke said…
How have you been doing? It has been awhile since I have been on here. I haven't forgot you! Hope you have a wonderful christmas. Anytime I feel sad I just come on here and watch butter wave lol that is so cute. Talk to you later

Brodey's Mom said…
Yeah, Brodey is overweight. The vet made us put him on a diet. He was 42 lbs. when we took him in a couple months ago. We cut back on his portions. He has slimmed down a bit. We never give him people food or too many treats. He loves ice cubes so he thinks those are treats. We give him bones to chew. He has them all over the house. He is just a big guy. I think he is larger than the standard. Cardis are generally bigger than Pems, but since the breed has such a long back, it is so important to keep their weight down. It's hard not to give in when they look at you like they are so hungry, but when you keep the extra food away from them it is out of love. "I won't feed you because I love you, but here, I'll throw you a ball." :^)

I am no longer in the military. I got out about a year ago. I was in the Navy Reserve, but my husband is still Active Duty Navy. This is his last tour before he retires. He is on shore duty now so he never has to travel. We have spent every day together for the last year. It has been wonderful. Last year, we were only together for a couple months total.

I never really thought that being in the military made us particularly courageous. I joined after 9/11. I wasn't being brave. It just seemed like something I was supposed to do. I'm not one to ask, "Why doesn't someone do something?" I always ask, "What can I do to help?" I had my own computer consulting company at the time. I was young enough, healthy enough and had skills that could help. I wasn't married. I don't have any kids. There wasn't any reason for me not to be that person to do something, so I joined the Reserve. I knew I could spare at least one weekend a month and two weeks a year. I worked in intelligence. I served for six years, the last two of which I was on Active Duty. I was never in combat. It doesn't take bravery to sit at a computer. I know what I did made a difference and nothing has ever made me more proud than to wear the uniform of a United States Sailor. I knew that every time I put on that uniform, I was part of something great.

My husband has seen combat. He has worked with some of the truly brave. For the last eight years he has been stationed with SEALs. These men are the most fearless, selfless people I have ever known. One of our friends wrote the book "Lone Survivor" about his experience in Afghanistan where he lost several of his teammates. These men are the reason that I had so much pride every time I wore the uniform.

The military life was our choice. It didn't really take courage or bravery to make that choice, but it does take strength to maintain the lifestyle. At times this life has taken more strength than I had. Maybe that is where courage comes in. It does take courage to keep going when you know you just aren't strong enough to continue. I know you know that feeling. That is what courageously rebuilding your life is all about. Where does my courage come from, you asked? People in my life who set the example. The SEALs my husband works with, my grandfather who volunteered for WWII, my grandmother who was a Rosie the Rivetter, mostly my mom who told me I could do anything.

Well, this is getting way too sappy. Take care of you and your family. I want to see some Christmas pics of Butter. I'm sure you have snow on the ground. I would love to see Snowbaby Butterball in the snow. I hear Corgis love the snow.

Brodey's Mom said…
Hi, Joy! I was looking for a cool online photo sharing service and I thought of you. I was reading some reviews on http://www.photographybay.com/2008/02/11/45-photo-sharing-sites/ and one of the sites talked about being for budding photographers and that they have contests and stuff. That is what made me think of you. You have the best pictures. I thought you might be interested. Just thought I'd share. Looking forward to more inspirational pictures. ~Clara

Karen Crich said…
hi,
Went to see the breeder I have been in contact with about the pembroke, cardigan mix puppies today. It was a 2 hour drive and even longer because I got a little lost on the country roads.
When I got there I was sadly disappointed. It was the closest thing to a puppy mill I have ever seen. There were many breeds of dogs from Jack russels to Newfy dogs. All dirty, flees, unkept farm yard and horible living conditions. They were not under fed and not living on top of poo but not a clean environment. I have to tell you that all the dogs and cats on the premises were all good natured. I had 2 friends with me and they said that one of the pups looked like it was having a hard time with back quarters and the other friend spotted fleas on some of the other dogs.
Cannot take the chance with this one so will have to go hunting some more.
Karen