For years, wilderness backpackers have relied on rigid bear-proof containers to protect their food from bears and to prevent bears from becoming dangerously habituated to human food.  They are typically too large and rounded for even a grizzly bear to get its teeth around, quite heavy (up to 2 lbs.), and can be expensive (one is made of carbon graphite, up to $300).  I usually use a much lighter, cheaper Kevlar bear-proof bag called an Ursack that is becoming widely accepted. 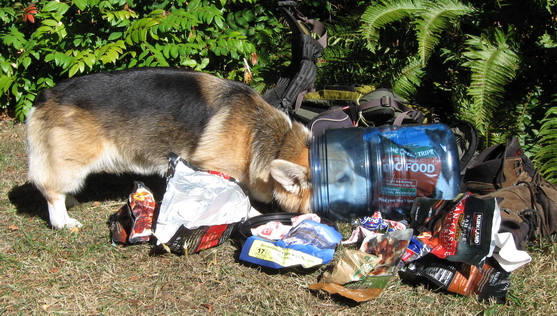 Pictured above:  the Bear Vault, an industry standard well-tested on grizzly bears.

Ever since I started using bear-proof containers (Bear Vault, Bearikade) instead of hanging my food in trees at night, I noticed that I was running short.  I was two whole days short on one 11-day trip, and really went hungry.  At first I thought I’d simply forgotten to pack some of the food, but it happened a couple more times.

Finally, I put two and two together and realized that my dog was stealing my food at night!  Neither the Bear Vault, the Bearikade, nor the Ursack are corgi-proof (I have not tested the Garcia yet).  Both in the field and in my back yard, I’ve set up remote-controlled camera traps and caught the little thief red-pawed.  I couldn’t believe it.

Without opposable thumbs,  how could a corgi get into a bear can?

Turns out, it can’t.  Not even a corgi can get into a bear can without human assistance.  But human assistance is seldom far away.  Sooner or later, the human is going to make the mistake of looking into the dog’s eyes, and the Corgi Mind Control Stare will take over.   This was happening to me on solo trips at first, and I had no clue, but then one night with a partner, he noticed me getting up in the middle of the night.  “I thought you were going out to pee or something,” he told me, “but you had this zombie-like slack-jawed look on your face  – didn’t respond when I asked what the heck you were doing – you just sort of stumbled out of the tent in a deep trance, opened the bear can, and let Al steal half a day’s worth of food.  Then you closed it up and sleepwalked back to the tent.  If I didn’t know your dog so well, I never would’ve believed it.”  I didn’t remember a thing. 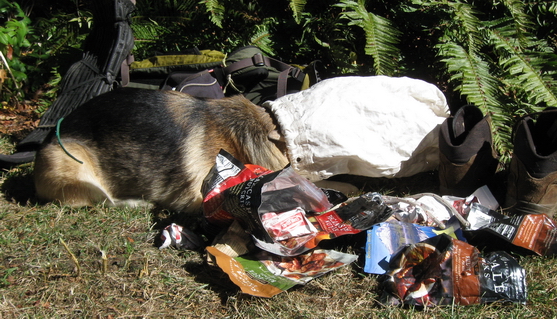 Pictured above is the bear-proof kevlar Ursack, a favorite of ultralight backpackers at 0.48 lbs.  It is no match for a corgi, either.

Note that my research casts no doubt whatsoever on the reliability of these fine devices against bears.

Hahahaha!  Cute.  Maybe you should pack one just for the corgs.  Of course they would have to carry it themselves.

Use the bear proof food container and hang Al in the tree overnight.