Life is unfair! I am the one that just love dogshows and it is going great for me too. So why am I angry at Petra today? Let me tell you..... She had the nerve to pack a bag with my showstuff and took out a crate. I got so excited, but for what? Did she bring me to a show? No!!!! She told me that she would bring the little six months old brat Tiger!!!!

Well I am not so angry anymore, because I know that it is because of me that Tiger did well at the show... I helped Petra to train him before the show, I went next to him when Petra walked him around, so that he learned to walk like a showdogJ)

So Petra told me about the show:

Wesa Borgs Tiger went to his first puppyshow, It went very well and the judge Harriet Franzén really liked him. Tiger went Best of Breed (BOB) puppy. It was great to walk Tiger in the ring, because he really liked it and it looked like he had done it many times before. Everyone at the show was charmed him and he enjoyed the day.

Here are some pictures from the show: 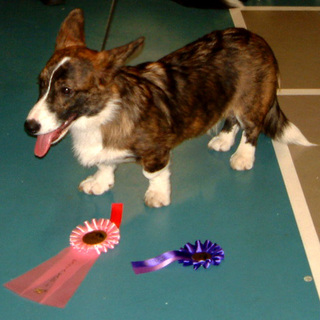 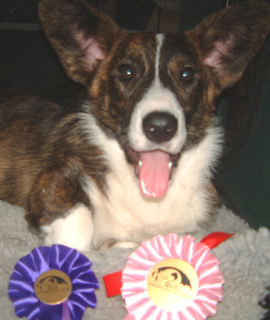