2nd trip to the Groomers!

I hurt my neck and caused a spasm in my back earlier this week, so my one weekend off this month was sort of ruined for me and my boy. He desperately needed a bath and I couldn't do it. We went to our Petsmart for a grooming trip (his 2nd one ever) and it went SO WELL! He did great on his first one, but he's definitely becoming "all boy" the last week or so (the neuter appointment is in 2 weeks) therefore I had my little worries.

When we (the lady and I) were filling out his paperwork part, he was being a little, well, rowdy (he's appropriately named sometimes). He kept baroo-ing and barking and I couldn't get him to calm himself. I apologized and the gal told me not to worry. Well, Rowdy figures out the little gate into the grooming half of the waiting area is just a push door and busts right in and sits calmly by her feet. We laughed and I said "Apparently you were on the wrong side of the gate." He calmed right down until the paperwork was finished. He walked right to the back with her and I left to do my morning errands.

When I arrived a few hours later, I walk in and say "I'm here to pick up Rowdy."  Instead of just giving him to me with his invoice, they tell me to go pay and come back in a few more minutes. When I return after paying, the gentleman is all snuggly with my boy saying "This is such a COOL DOG. We wanted to play with him a few more minutes and say good-bye"    :-D  He has had this reaction before with the ladies of the grooming salon, but now the boys wanted their fun with him.

He even gave me this adorable little "Progress report card" that states how good he was, they even wrote in the comments that he was a sweetie. His one area of development is using the dryers. He's been getting better with me using the blow dryer at home, and I know they aren't the same as the dog dryers, but loud noises are loud noises. I think he'll be a pro in no time!  Being the proud mama that I am, I put his little report card on the fridge with all my other Rowdy related photos and his calendar (yes he has his own calendar for Rowdy-related things).

I highly recommend Petsmart's Puppy package for all you new dog owners! It's only $10.99 until they are 5 months old and includes the wash, ears, nails and bandana. If your doggie needs a trim the puppy pack is only $5 more. It's really inexpensive and helps get the little ones prepared for when they're older.

Now my boy and I are rounding out our weekend cuddling on the couch with movies in play. 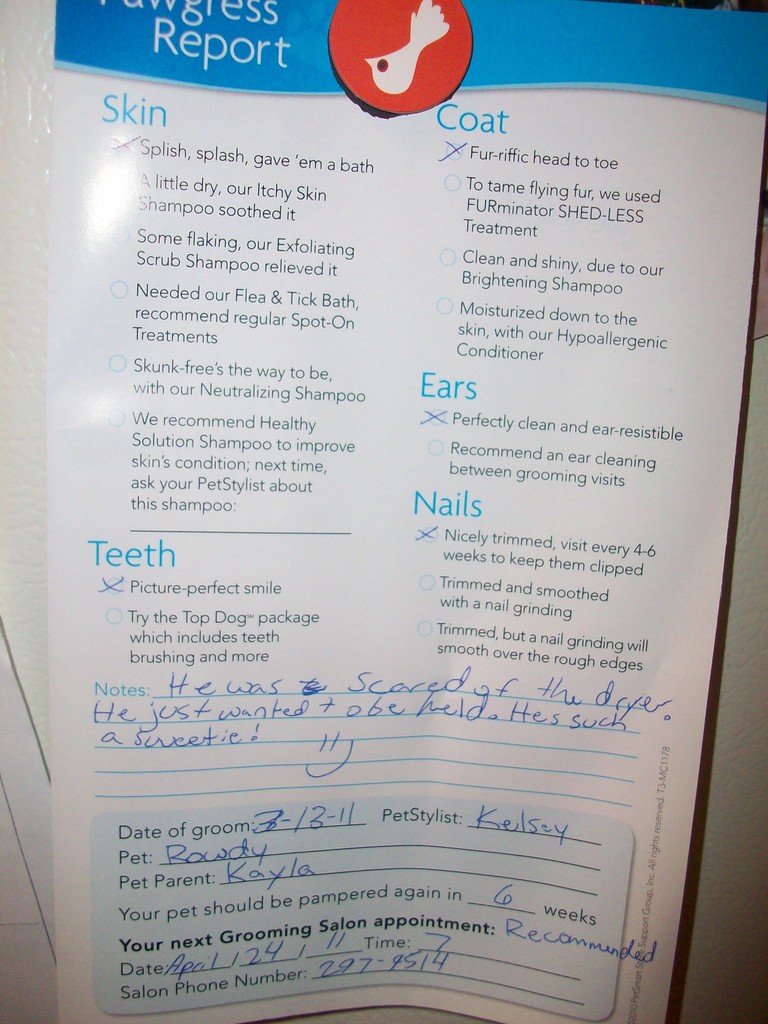