UPDATE: I am sad to let you guys know that when my boyfriend called the owner so we can get her as planned once my bf got out of work, he told us that his roommate gave her away while he was at school without his permission. We were so upset, and felt like we were too late on the draw.  I was getting excited just thinking about having two corgis to look after. I feel like we may have failed this poor girl. I hope that whoever has her now will take good care of her. I just wish it was me, that way at least I know that she would have been alright. :[

I tend to look around the pet section on craigslist daily and keep an eye out for any possible corgis. Well, yesterday I believe I made a hit. Some guy posted an ad for a free dog and listed it a 2 yr old border collie. It looks nothing like collie but sure looks like a black headed tri to me! When I saw her, I became so sad at the thought that she would go to a home who may not be suited to care for a corgi or a corgi mix. I knew of a corgi rescue in my area and actually emailed them last night hoping that they may help in finding her a forever home. I didn't think I would get a reply back, but to my surprise, the rescue owner called me back 15 minutes after I emailed her! She told me that she would never ever turn down a corgi and would be happy to take her in any time next week. That made me so happy, but now I had to get the dog! I contacted the owner's ad and gave him the website of the rescue and their phone number, but he didn't seem very interested in doing the work, he just wanted her out as soon as possible. When my boyfriend came home I showed him the dog and he became so excited and decided he would keep her instead and now we are going to be picking her up in 2 hrs.

I can't believe how all of this has turned out and how quickly it was decided to keep another dog, especially since I'm moving to Houston in a few weeks  and will be taking Tomahawk. I know that part of the reason he wants this new doggy is to help him not be so lonely when I leave. He loves Tom so much, and I guess he wants something that reminds him of Tom. I want it to happen for him, but a part of me thinks it may be a decision that needs more thought put into it. I told my boyfriend, that at any time, the rescue would take her in if it doesn't work, or he can even foster her until they find her a good home.

I don't know why am I so nervous about this whole situation. I always wanted 2 corgis, but knew that that dream would have to happen years down the line when I am more financially stable.  Do you guys think we should try to keep her or should we surrender her to the rescue? I want to help this dog so much, but I don't know if I'm doing something to benefit her or if I'm just going to cause her more stress. Sometimes being a dog lover is so hard.

Here are a few pics of her. Maybe you guys can help me figure out if she is a full corgi ( she looks it  to me) or is a mix. 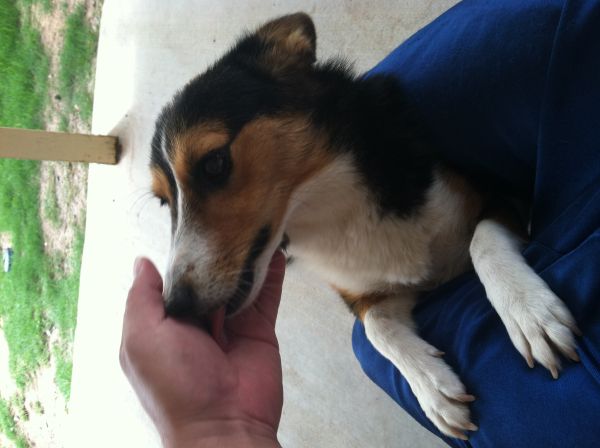 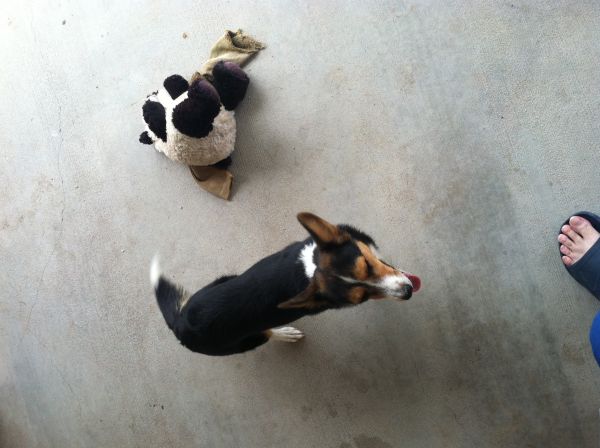 I agree with these posts!  She is super cute, too!  I think fate must have sent her to you since you are such a good and caring corgi mom!  Good luck too all of you!  Keep us posted!

She looks like a spitting image of my Jack, tail included...maybe that is why they didn't think Corgi OR they have no idea what a Corgi is so they just guessed.  BTW  I agree with the red headed tri idea...my angel Emma and my Jack started just like that with lots of black on the head...Jack at age 3 is still getting redder and Emma by the time she was about 6 was all red headed with only a few dark hairs mixed in.  Keep us posted when you get her, Corgis are more fun when there's more than one:)

How in the world did someone mistake her for a border collie?  :o  She looks to be all corgi to me!  I think she's technically a red-headed tri rather than a black-headed tri, though.  She's missing the black mask and has quite a few red patches on her head.  If she's really 2, though, then her color may not change any more than it already has.  :)  Congratulations on your new addition!  Love that tail!

She's beautiful! I think she looks like a purebred. I wish I could get a second right now hahaha.. Oh, so far away is that time for me.

I think that you will know when it happens. If nothing else, your boyfriend can foster, as you said:)