I’ve been pretty busy with my other blogs (I do 5 with this one) and I’ve been twittering, too.

We aren’t sure if Dott is pregnant or not. She did manage to sneak out with Doug (the full male foster corgi we had for about 6 weeks), but then we had bred OC 5 times (she only came in once a year & we started when she was 2) before she actually took and had pups, so we don’t know what’s going to happen as this wasn’t a multiple breeding. 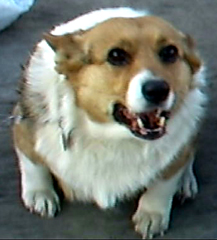 OC seems to be doing alright after having been stepped on (sort of) by Tuffy (our 1200 lb. Palomino). She is 10 years old now, didn’t move fast enough to get out of his way. I'm beginning to think he didn't actually step on her (though it looked like it to me at the time) I think he may just have grazed her hip and it rolled her, or maybe her corgi herding instincts caused her to duck down and roll. Anyway, she didn’t seem to have any problems the first day or so (I watched VERY closely the first night because I wasn’t sure if her adrenaline was hiding something—she got MAJORLY TICKED at him!) I had to MAKE her come in cause she was going to give him “what for!!!” We don’t call her OC (Ornery Cuss) for nothing!

I read a book about animals that mentioned that they don’t like for others to see when they are having problems as it is an old instinctual thing to help them not look weak to predators. They have to trust you a lot or really have problems before they will show weakness.

Comment by Jenn on July 17, 2009 at 7:45am
The vet told me this when I had to have my old cat put to sleep a couple of weeks ago. The vet thought my cat was in a decent amount of pain, and I told him he didn't really act like it. The vet then proceeded to explain the "survival" thing to me. It broke my heart to think my cat was in pain and I hadn't done anything about it. Behavioral changes is the biggest thing we can look for, according to him.