The most exciting day in the life of the corgis!

This morning turned out to be a memorable one. For the first time, there was a rabbit in our yard. In our virtually inescapable yard. I'm not even sure how it got in. I did what I usually do, open the door to let them run out. Usually I would walk out too, but since it was below zero I chose the warmer garage to stand in.

Next, I hear Pandora bark. This is a strange occurrence, since she is a relatively quiet dog. Then, Trunks starts making a warbling bark noise which would continue through the remainder of the story. I look outside around the door and I see a terrified rabbit being chased by two corgis. Pandora was quite determined. Remember how I said our yard is virtually inescapable? That would be because of the three feet of snow plastered against the fence line. The rabbit is leading a circle chase followed closely by Pandora who is being followed by Trunks. It was the funniest thing I'd ever seen. The circle lasted about five rounds before Pandora broke through the snow and was tripped up. Trunks ran into her. The rabbit then saw its escape behind their dog house against the fence. They did try to get at it, but it was hiding pretty well.

Trunks ran up to me looking with a wide eyed look, "see mom, we almost got it." I had to remind him that he still needed to pee. Had the snow been a little harder, I would probably be cleaning rabbit off of the snow in our yard and off two corgi faces.

I don't know what happened to the rabbit, but I'm willing to bet it had a heart attack behind the dog house. We'll probably find it in spring. 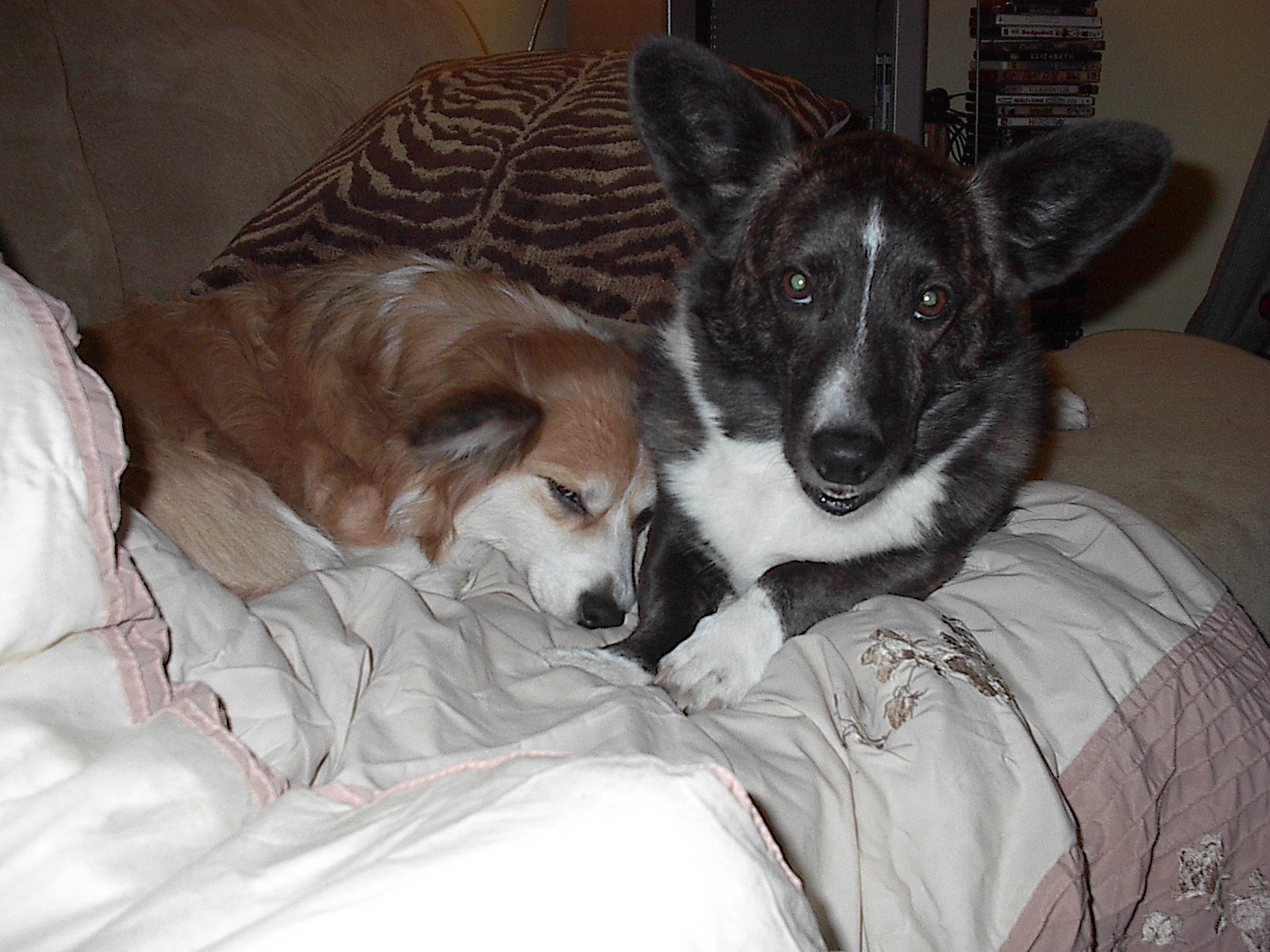 The threat has been averted and they are pretty proud of themselves.

Comment by Carmen on February 4, 2009 at 11:34am
I wish I could have taped it too. It was absolutely hilarious. Never seen my little low riders move so fast!

Comment by Natalie, Lance &Tucker on February 4, 2009 at 12:01am
Lance wishes he could have joined Pandora and Trunks in the bunny chase!! Great story! We dont have a fenced in yard but if we did he would have a field day chasing all the bunnies, but then again maybe we wouldnt have so many if they knew a doggie was in their rabbbit space!! I am very tired of seeing all the presents they are leaving in front of the house and also the backyard. : (

Comment by Tauna and Kota on February 3, 2009 at 9:01pm
how sweet. awesome story. wish you could have video tpaed it. would be a cool sight to see.

Comment by Tammey & Caven on February 3, 2009 at 8:33pm
Great story! We have rabbits that run free on the lot at our agency where we park our truck and when we come home late and there are no other vehicles on the lot we let Bear have a chance at them. I don't think that he could actually ever catch one but, boy he sure gives it his all. He got real close one night and the rabbit looked back over his shoulder and saw how close Bear was to him and really kicked in the after burners. Tammey and I were so proud to see just how much he can do with those little stumpy legs. And, after the rabbit slips through the fence Bears comes back with his tongue dragging the ground and a big oh smile on his little Corgi face.