My fluffy, Griff, has an open puncture wound on his forehead. I believe it's from our German Shepherd when they were playing, because she's very mouthy with Griff and likes to bite around his head & neck area.

It's basically a minor wound, no bigger than the size of a dime, though it's slightly deep and completely open. I trimmed down the fur around it rinsed it with alcohol, then smothered it in antibiotic cream (Target brand neosporin). I've been doing this daily for the past three days and it seems to be responding well, though I'm watching closely for infection.

I don't think I actually found the wound until the day after it happened. His fur was completely covering it, and it really looked like he had just gotten some sort of sticky stuff stuck on his forehead. When I went to wipe it off, I discovered it was dried blood and found the owwie.

My question is this: is rubbing alcohol a good cleanser for a dog wound, or should I just pick up some hydrogen peroxide? And is a little pus normal for a healing wound? It doesn't smell infected and it's not hot, so I'm assuming that's kind of the way things heal.

Permalink Reply by Libby and Dyddy!! on March 27, 2009 at 6:36pm
Aww, poor baby! Give him extra smooches! I usually do a you have, neosporin or the like, a warm wash cloth with a little mild soap.

Permalink Reply by Sarah on March 27, 2009 at 8:59pm
I would just stick to what you're doing. I know neosporin works great on wounds on dogs. Also I have a german shepherd and a corgi..it's an odd match but they go along good together! haha

Permalink Reply by John Wolff on March 28, 2009 at 12:08am
Hydrogen peroxide is for deep puncture wounds. It releases oxygen, which is lethal to the anaerobic Clostridia bacteria that cause tetanus, gas gangrene, etc. They can only grow in the near-total absence of oxygen -- deep puncture wounds like bite & nail wounds -- so anyplace you can get hydrogen peroxide without a hypodermic needle, one would think, already has plenty of oxygen from the air.
Alcohol kills bacteria but also kills living tissue. I do not think it's used for first aid cleaing. You can use alcohol BEFORE skin punctures. Use soap and water or Betadine for first aid.
I recall by bro (ER doc) telling me that they use full-strength Betadine to clean deep-tissue wounds [somebody correct me if this is wrong]. Povidone iodine, inhibits bugs, not too toxic to open tissue.

My favorite method for my own superficial skin wounds is to keep a band-aid soaked in Neosporin over them: 3 topical antibiotics kill bacteria, and the petrolatum base keeps the skin from drying out (skin heals more slowly when it dries out). Bad knuckle scrapes heal in less than a week with that method. But you can't keep a band-aid on an animal, and they'll lick and ingest the antibiotics, which are meant for topical application but maybe too small in dosage to do mischief internally (I'm guessing).

In our experience, pets roll in sh*t and superficial wounds heal quickly anyway.
The danger is ABCESSES from deep puncture wounds, esp. in cats. Anytime you suspect a bite wound, watch for swelling in the general area. That's those nasty anaerobic Clostridia and other bacteria growing in a low-oxygen environment. That's why they put in those drain tubes after surgery.

Permalink Reply by JW on March 28, 2009 at 12:30pm
Thanks for all of the information! I will stop using the alcohol and up the smooches quotient :)

I also have some medication meant for hot spots that I considered using, but I think that it's really meant for scrapes and minor skin irritation. I think it might be too harsh for a deeper wound?

Permalink Reply by Jill M on March 28, 2009 at 5:34pm
As long as there's no swelling, at this point just keep putting the antibiotic cream on the wound at least three times a day for 5 days and keep it clean. No need for anything else besides love. If there's swelling or the pus becomes green, take him to the vet. .....When I worked for bird veterinarian, I learned a little secret...there are two types of Neosporin-- one is a cream and one is an ointment (petroleum based). Since birds pick their wounds even more than dogs do their, the best one to use is the cream as it as it's applied it obsorbs right into the skin. Thus, the animal wont be able to ingest it. When I got my dogs, I asked about this for use on their paws for cuts, and the vet said yes, the cream is a better choice for them as well. It also doesn't oily up the fur around the area. So, I threw out the ointment and switched to the cream. (the store generics usually have this version too, you just might have to look a little harder for it.) ....good luck and best wishes jill

Permalink Reply by Patti on March 28, 2009 at 6:11pm
john's got some good info for you on treatment of punctures - but one thing you have to watch for with puncture wounds in dogs from other animals, as he states is abscesses. many times these are caused during attacks when the attacker "shakes" while biting - know this from experience...., as such more bacteria can penetrate causing the abscess. if this happens, you'll need drains put in at the vet.... good luck

Permalink Reply by JW on April 6, 2009 at 6:22pm
Thanks for all of the advice! Griff healed up extremely well. I used a medicated lotion soap to clean his wound, then applied an antibiotic cream 3 times a day, in addition to his daily skin & coat vitamin. He looks fabulous. 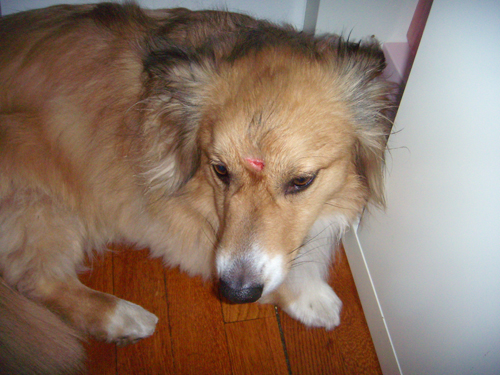 One Week Later...Healed! And in the April snow, yuck: 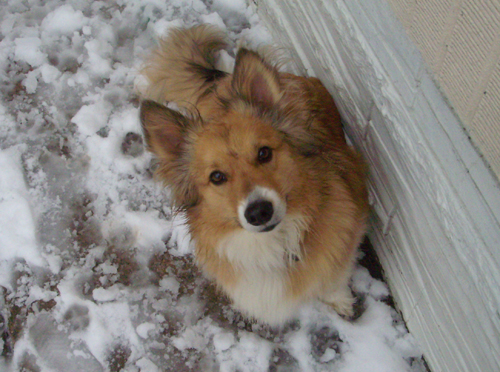 Permalink Reply by Sam on April 6, 2009 at 10:12pm
Please do not use alcohol! That will burn and make your pup most uncomfortable. The best cleaner would probably be Betadine scrub, easily found in pharmacies. There usually are generic brands. I would clean the wound at least twice daily then use the neosporin. Do know it is not uncommon for these sort of wounds to abscess. Sometimes much of the injury is hidden underneath the skin. You should not be seeing pus. Also do not let the wound cover over with a scab until all the tissue is granulated from the inside out. This is quite the vehicle for an abscess. If you notice swelling or an odor a trip to your vet is indicated. Good luck!