Digging holes at the dog park

Stanley sometimes loves digging holes in the dirt at dog parks. We live in an apartment so we don't have a backyard so I'm not sure if he'd dig at home. I've never seen him digging in the area around our apartments though. It's only at the dog parks. I'd like to discourage this behavior b/c he gets so dirty and we have to fill in the holes. Plus, he usually starts a trend and then other dogs at the park start digging alongside him, much to the chagrin of the other owners there. We usually say "uh-uh, no dig" in a stern voice but he's just so stubborn. He'll keep digging until we physical pull him away and then he'll run circles around us and eventually end up back at his digging space. What's the best way to discourage this or redirect him?

What you can do is lure him away from the behavior (digging) with treats, put in in the center of your palm, close your fist, then present it in front of him, the tell him to follow you. Your treat will have to be really good tho, also make sure other dogs are not close by to prevent starting a fight. Good luck! Which dog park in O-town do you guys go to?

We frequent Pawmosa dog park in Casselberry but we've been to pretty much all of the dog parks in the area. Fleet Peeples in Winter Park is the closest to our apt but I can't stop Stanley from jumping in the lake and then rolling in the dirt, so we have to come prepared for a muddy wet pup when we go there.

Permalink Reply by Stanley & Charlotte on May 21, 2009 at 9:26am
Oh no offense taken! I know dogs will dig but I have to say, Stanley's usually the only dog digging up a storm and he gets a little obsessive about it. I was just wondering how other people reacted to their dogs digging. I guess that was really my question, do ya'll just allow your dogs to dig?

Permalink Reply by Stanley & Charlotte on May 21, 2009 at 9:46am
Case in point - Stanley at his finest moments 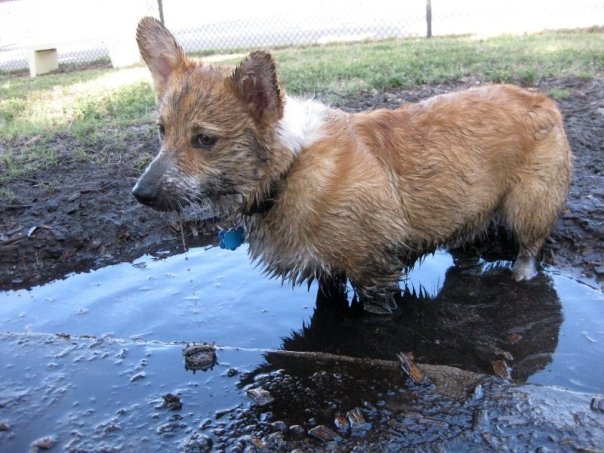 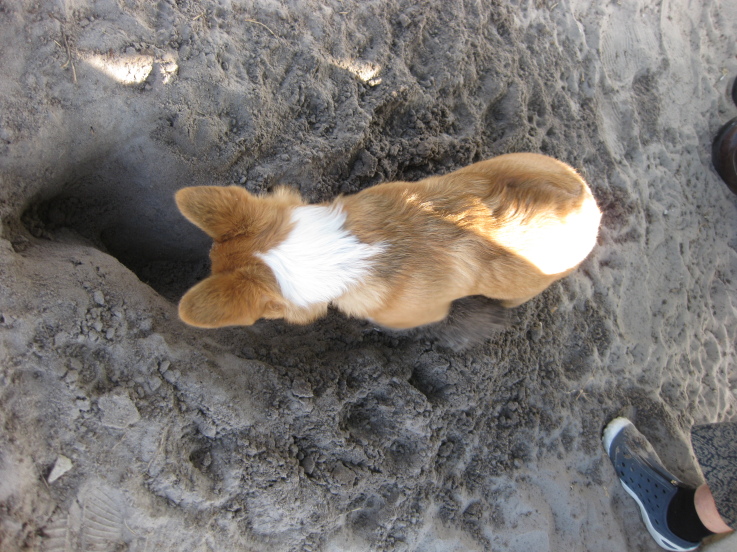 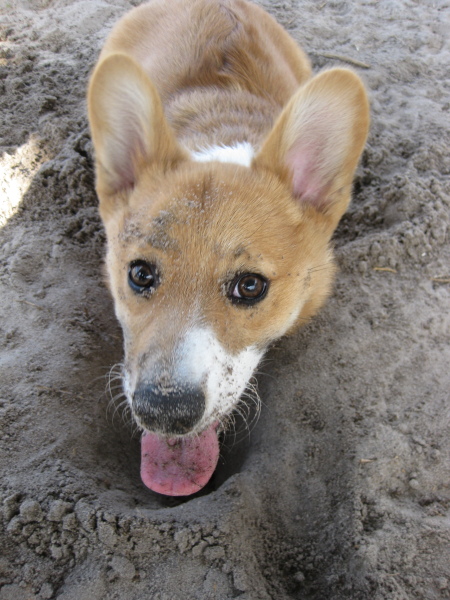 Permalink Reply by Jacki, Nutmeg & Cinnamon on May 21, 2009 at 1:30pm
My friend thinks I should employ Nutmeg out as an excavator. When her sister Superstar came over- they dug a hole under (UNDER) my house in about 5 minutes. When I take her to the beach, she runs around with Leo, and then settles in to dig her way to China. She just digs! I can't wait to meet you and Stanley at the Corgi Picnic later this year! Maybe it's something Celeste feeds then as pups... LOL!!
Attachments:

Permalink Reply by Wendy Hixson on May 21, 2009 at 7:29pm
That mud belly photo looks VERY familiar. We do have a back yard and thanks to SC clay it is a swamp bog in which a very low riding corgi named Colbert likes to tromp through. Literally, he splashes and goes through puddles on purpose. We also have a collection of sand pits in the yard (near the house and garage where they back filled in our development) we fill them back in and cover with a rock usually, this being after we have chased him away from them. This is also how I have missing Kongs before.