Okay, so my friend and her husband are in the process of getting a siberian husky. She has told me numerous times that her female siberian husky is going to be the same size as my male pembroke corgi. In my mind I think she is setting herself up for a huge shock. The huskies I've seen and been around are NOT the same size as corgi's! My little guy at 4 months is already 15 pounds so I realize that he is going to be on the bigger end (which is totally fine by us) but I am baffled about a husky being that small. So I've done a little research and it says female huskies in AKC standard are supposed to be 30-45 pounds....so i guess if it was a super small one it could be similar size?

Am I totally off my rocker in thinking she IS getting a bigger dog than a corgi?

I just don't want her to think she is getting a "smaller" dog, end up with a big one, then give it away because it's too big for her condo. Any help on any of this would be awesome!

She IS getting a heavier and taller dog than a corgi.


My wife have always wanted a husky, due to the "unusual" high amount of exercise that husky requires, we knew we were not able to provide it with a great lifestyle and environment. And boy do they shed :)

On a side note, there's a pure-bred Husky that loves wrestling Casey at the dog park we frequent and, although he's a male, even at 6 months old he was quite a bit larger than she was. His legs were the same length as most large-ish dogs. I think the length of the legs can make them seem quite a bit bigger. Despite the fact that their bodies may only differ by 10 or 15 lbs, the longer legs make them seem like much larger animals (and the longer legs changes things quite drastically in terms of their behaviour, movements, etc.)

Permalink Reply by Avyon on July 29, 2010 at 10:47am
My brother has a husky and while she weighs much less then the corgis she is taller/bigger. Its funny cuz you'll pick up one of the corgs and go "UUNF" and then pick her up and do the over-pick up and almost fall over cuz she's so light lol.

Permalink Reply by Carol Rea on July 29, 2010 at 5:04pm
Sam, videos are great! where did you get those fish? My Lucky loves squeaky toys, he sits and throws them into the air, then makes them squeak and starts again. His ducks are about done - you could say "Cooked" we need a new novel toy.

As far as size, we have a 30# corgi and a 40+ pound corgi, so I guess it depends what size corgi you are comparing to. I cannot imagine having all those legs!! Looking at that video, I kept seeing LEGS, you would have to worry about a tail clearing off the coffee table and a dog that could get it's nose on the cutting board or the table (I know, you can train them not to do this! would someone please tell my sweet little neightbor lady this?)

Permalink Reply by Butter on July 29, 2010 at 6:19pm
I have had both and my Cardigan Welsh Corgi weighs about the same as my Siberian Husky did. The only difference is the leg height.

Permalink Reply by Sammie Esposito on July 30, 2010 at 11:24am
It really depends on the husky. Some lines are larger and very muscular, while some are smaller and compact. I personally have a German shepherd/ Siberian husky mix along with my Pembroke corgi. My shepherd/husky is about two feet taller and weighs 4.5 times more than the corgi. While a lot of that has to do with the fact he has shepherd in him other huskies we have come across have been much larger then my corgi.
Yes potentially it could weigh the same, but height is definitely different. Have you ever seen a foot tall husky cause I haven't.

Permalink Reply by Nicole, Stanley and STELLA! on July 30, 2010 at 11:35pm
My roommate has a husky mix that is actually smaller than a pure bred (she's about 30 pounds). She's still a lot TALLER than my corgi! Here they are together. Stella's a little bigger now, she's a puppy in this picture. 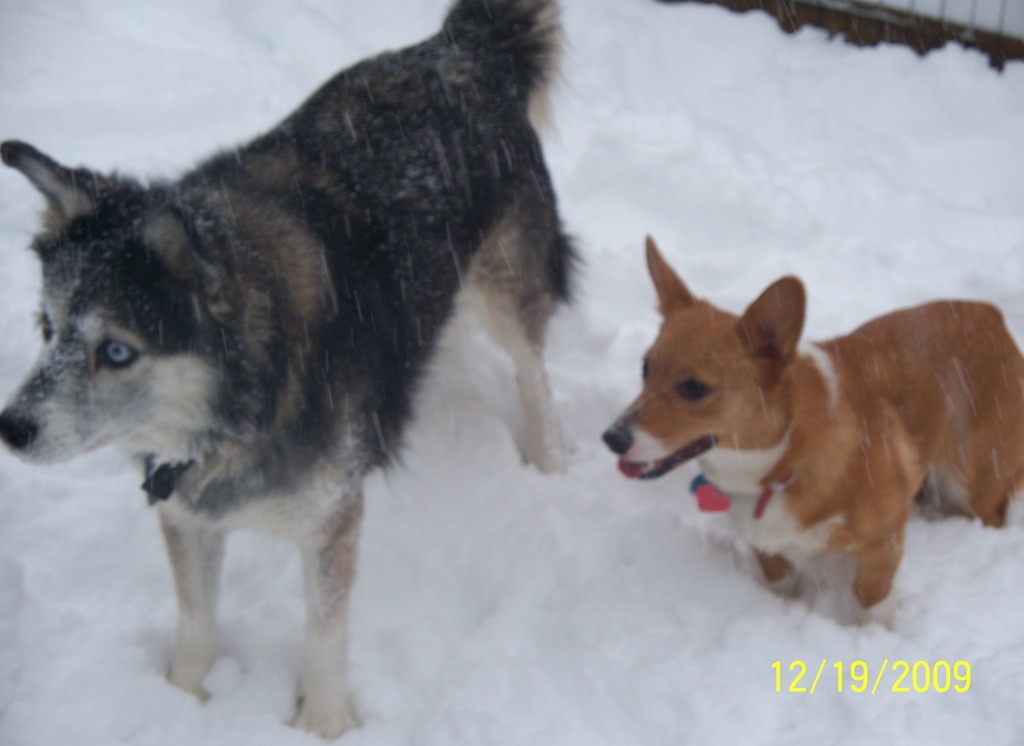