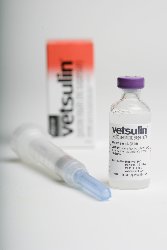 Support and information for Diabetic Corgis

I have formed a group called Diabetic Corgis. This is for anyone to join. It's mainly to provide support to owners of diabetic Corgis, but I'm not limiting the group to just that.

I almost lost my sweet Chester to diabetes last May. My vet diagnosed him on a Friday, but didn't want to give him any insulin for a week because he'd been on steroids for a neck injury. Well, that almost killed him. By the following Monday (Memorial Day) he lost the use of his back legs and had been crying in pain the entire weekend.

I was afraid I would have to let my Chester go. Diabetic supplies and food are not cheap! But after one day of insulin Chester was nearly back to normal. Within one week he was better than he'd been in months!

It's been difficult keeping him away from food, he's a bottomless pit! But it is worth it to see his bunny-butt every day. He's just turned 12 and I am so happy that I didn't give up on him.

You need to be a member of Diabetic Corgis to add comments!

ed my son & we took him to the vets & they put him down his kidneys were failing  i still cry every day i miss him soooo much  i still do not have another dog one day maybe one day :)

My Corgi, Charlie passed away with complications related to diabetes and pancreatitis. I have a vial of Vetsulin full minus about 22 units.

I don't know if someone can use it, or if it's proper. It's refrigerated and we always used new needles. I just hate to see it go to waste.

Hi everyone my Belvedere was diagnosed  diabetic last july - august I thought I was going to lose him the poor vet couldn't look at me because he thought the same thing but fortunately it didn't happen. Now we  have the problem of low sugar it has occured twice so far we have reduced his insulin dose & I now let him have a treat every now & then just in case. We are on a low fat diet & seem to be going ok at the moment & yes his back legs went on him also but it took a good couple of weeks for Belvedere to recover. Would appreciate your thoughts on trial & errors with this condition as I have never h

ad a diabetic dog before & thank you for starting up this page :)

Comment by alice wright on February 6, 2010 at 10:38pm
Bobby doesn't have diabetes but I do and he knows when I'm having a low during the night. I have woken up to Bobby licking my face and crying, have taken a blood test to find my levels very low, I swear he has saved me from a coma.

Comment by Butter on January 14, 2009 at 4:23pm
HI, Butter doesn't have diabetes but I am joining to show support. Also to learn more about how it effects and manifests itself in dogs. Joy and Butter