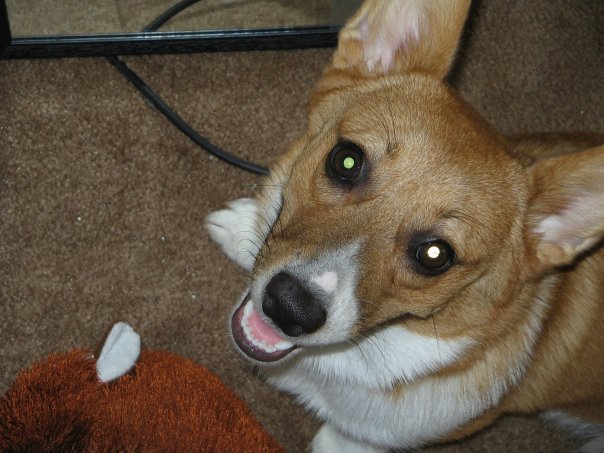 Red Ribbon From Jodie and Tori

About Me:
I am who I am, and most importantly I LOVE CORGIS!

About My Corgi(s):
I have two Pembroke Corgis. 1 Sable and White male, Pancake, or his royal name Sir Pancake Duke of Spamalot and 1 Tri-color female, Twiggy, or Miss Twiggy Belle.

See all the details on the main page in the Events column. It is also listed in the discussion forum of the Illinois Corgis page.

Hope to see your Corgis!

My husband and I were in Danville to visit his mom for Easter.  On the way out of town we decided to stop by the Danville dog park.  It is great!  Thick grass, established trees, very pretty park.

Do you go there?

Be sure to RSVP to CORGI-CON on the main page of MyCorgi where it lists the EVENTS.

We want to be sure people are noticing that CORGI-CON is getting some action.

If you want me to send you a flyer for CORGI-CON, send me your E-mail.  I can send you a page to print out and you can give it to anyone you know with a Corgi or leave a flyer with your vet or at your local pet store.  You can send an E-mail to CORGICON@yahoo.com. That is the account I set up just for this event.

I am looking forward to meeting your clan, especially Twiggy.  She looks a lot like my Corgis, Wynne & Will.

Check out CORGI-CON! It is a Corgi Meetup in Central Illinois. Urbana, Illinois is not too far from you. Come join the Corgi Convention! You can find information on the list of "EVENTS" on the MyCorgi main page or on the Illinois page "Discussion Forum."

Still making my way around this site lol. Your corgis are so cute!. Nice to know there are corgis in the area. If I can't get to the picnic, maybe we can meet up sometime. Seems like some of these dog parks don't allow puppies under 6 mo.

Wynne and Will are from a horse riding stable in Swisher, Iowa between Cedar Rapids and Iowa City.  Des Moines is past that about an hour, so it sounds like it is a different place.  I did find one of Will's brothers online over the weekend.  It was so cool because I saw a picture and just knew.  I showed that picture to my husband and did not tell him anything about it.  He thought it was a new picture of Will.  I wrote the family and I got the answer today that it is a littermate to my dog, Will.  I am hoping that they will come to the picnic so I can see the 2 boys together.

The picnic location might be changing again.  More Chicago people want it close to them so they were looking into Hoffman Estates.  However, Hoffman Estates will not allow picnicing.  I found 2 other locations. One is in Napperville and they will be checking into that park tomorrow to see if they will allow us to go there and picnic.  Napperville is 3 hours for you.  That is a little closer. The other place I suggested was near Joliet, but I think they thought that was too far.  It would have been better for us though.

I think it would be cool to have a Corgi Picnic a bit closer, but there are some problems with that .  First, I am not sure there are enough Corgi people in our area.  Also...WHERE would it be?  Champaign's dog park it not great.  No shade and it is right next to the sewage treatment plant.  Urbana's park is a bit better.  I never go there because there are never any dogs there.  However, if we were inviting dogs, it might be good that it is empty.  Springfield?  Peoria?  Bloomington?  I guess it would be best to find a great park first.  Well... IF there was going to be one close to here, it would have to be next spring.

Wow!  We do live close!  My husband grew up in Danville a long time ago.  His mother still lives there.

I just joined MyCorgi.  Are you new too?  I started because I went to the Wisconsin Corgi Picnic last Saturday and I wanted to share pictures with those folk.  Now I am trying to encourage a picnic in Illinois.  The place they had a picnic in 2009 is Freeport.  That is 3 1/2 hours for me, but I would go as long as the weather is tolerable that day.  My dogs LOVED the last one.  Would you attend a picnic in Freeport?

I love the pictures of your Twiggy because she looks a lot like my Wynne.  Twiggy has a nice blaze on her face.  Check out my page and see my 2 beautiful tris.