Butler did a few minutes of flyball at the Pet Expo on Sunday.  Aside from trying to avoid one particular hurdle, he seemed to have a good time (but he does love treats).  Anybody else play flyball that can give me a few pointers?

Tucker and Butler do not get along.  So everyone goes to their crate for food.  Tucker is presently wearing a cone because he has started obsessively licking one paw.  He is sulking because he doesn't like the cone so he doesn't eat.  Last night, Butler and Redford were out of their crates and Tucker was picking at his food.  Butler was about 8 feet from Tucker's crate and Tucker started growling at him.  Whenever he would growl, I told him "no" in a low volume deep voice.  We also had a…

Tucker has been licking one paw-between the middle toes.  I don't see anything like a thorn in there and I've been washing it twice daily with antiseptic soap that the vet gave me for one of the other dogs for another problem.

I can't get to the vet until Saturday.  Any suggestions on what i can do to keep an active dog who spends a lot of time outside from licking himself raw?

This Corgi mix is currently being cared for by FUPI (Foreclosed Upon Pets Inc).  My friend that volunteers with FUPI says she's about 18 months old, not well socialized, called Mandy-get in touch with FUPI if anyone is interested in helping her.

Best wishes to all for a safe and happy Thanksgiving.

I was in the kitchen and the TV was on in the TV room.  Suddenly there is frantic barking-as if the doorbell had been rung.  It stops and starts again a few seconds later.

Does anyone else have corgis who think the bell for the letters on Wheel of Fortune is the doorbell?

From time to time Tucker has tummy troubles.  I'm preparing packets of chicken and rice that I can freeze for when he does have problems.  My question is: how much to put in each packet?

He usually eats between 1/2 and 2 cups of kibble (Taste of the Wild) every day (he isn't a consistent eater) offered twice a day.  He gets 1 green bean per feeding (he doesn't need to watch his weight).  He gets a fish oil capsule at night along with his medications for his leg (long story) which are…

The fireworks have started already.  This year, Tucker is scared.  He's clingy and if I'm not available he hides in  a corner.  The thundershirt helps a little.  Any other suggestions to help him stop crying and feel less scared?

-heard this on NPR yesterday.  Read/listen all the way to the end.

Tucker broke a front claw.  It isn't bleeding but I can see the red interior.  It isn't broken completely off.  should I clip off the part that is still there?  Take him to the vet?

I've never had this happen.

I got an email about this little boy for adoption.  I'm full up with 3 boys and this little guy is a one dog house kind of guy.

He's a good looking little boy-hope someone can help him out.

Last Saturday, I took Redford & Tucker to the dog park.  Redford likes to run up and down the fence line with the big dogs (we're on the small dog side).  I let him run until he was really tired.

That night he was moving slowly.  I figured it was weekend warrior syndrome since we hadn't been to the park for a while.  He gets lots of sprinting in the yard, but not sustained running.

This senior female is at Lied shelter.  They are calling her Summer.  I'm full up with 3 but please spread the word.

Tucker has a thing for David's stinky socks.  He mostly likes to carry them around.  I would like to find a replacement toy but my challenge is that Redford tears apart stuffed toys and eats the ears or anything else that sticks out.

The little guy made it from New Mexico.  the vet says he's about 18 months old.  He's underweight and blowing his coat, but he just wants a lot of love.  Just wanted to share this happy little guy. 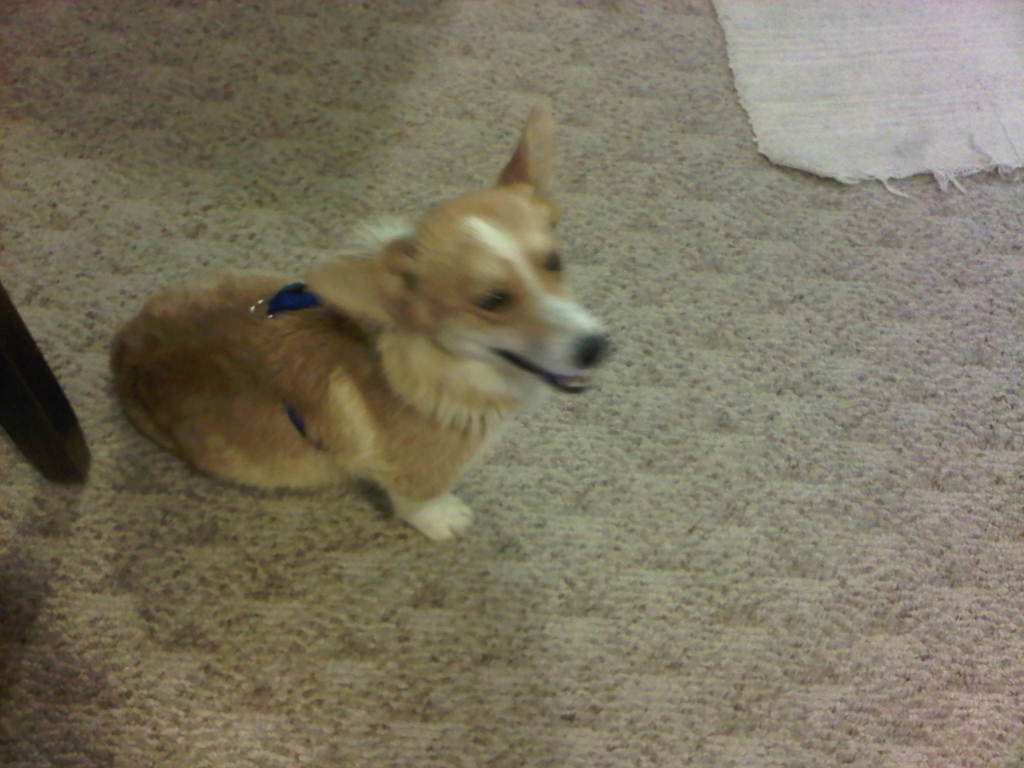 We keep a cushion outside for the boys (and their new puppy "sister" Stella-lab/pit/rot mix) to rest on during the day.

This is what we came home to yesterday.  They destroyed another cushion before Stella got here.  Any ideas why they are suddenly doing this?… 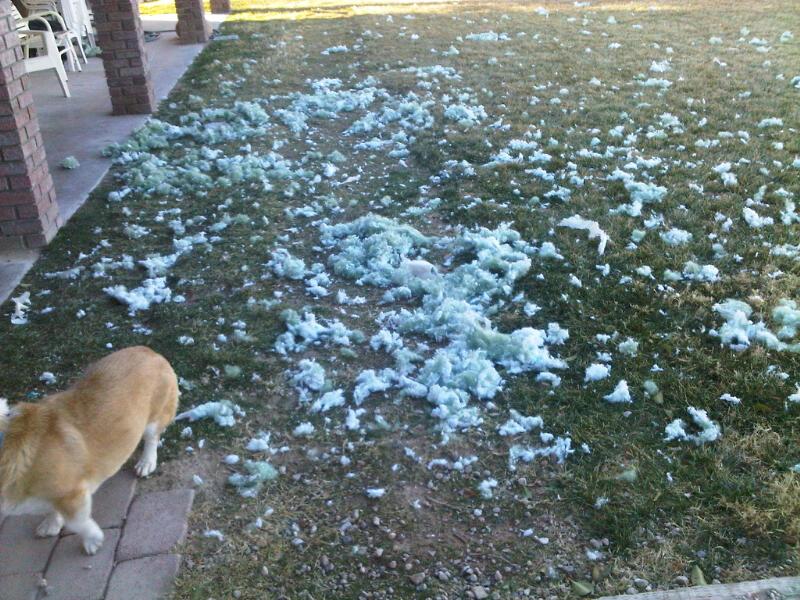 Found these by accident: corgi balloons

The little things in life

Sometimes the little things make you happy.  We rescued Butler almost a year ago.  I've never seen him play with a toy although I suspected he did because the green squeaky bone moved around the yard.  Last night he came running in the house with the green squeaky bone and was throwing it around and just having a great time.  It was great to see him playing-it is so different from the dog that was scared of the grass in the yard.

I want to thank everyone who answered questions.  I'm sure it was a bit confusing since my last post was that we had lost Corky.  So here's the backstory.  I had been on the list with The Animal Foundation in Las Vegas for a buddy for Corky.    On June 11, 2011, an itty-bitty tri-color came up for adoption.  We named him Butler because every time he hears a bell, he runs to the door.  He had been found on the street.  He's a sweet little boy who can't get enough petting.

We had a new experience last night.  One of our new guys panicked during a thunderstorm.  He clawed at the porch door to get in.  Once he was in, he was ok because the storm wasn't over us.  In the middle of the night, he broke down the gate (we had put both boys in the bathroom with a gate) and panicked until we put him in the bedroom with us.

Any suggestions about how to get him to calm down during a thunderstorm?  I hate to see him so distressed.