Welcoming myself to the Neighborhood

First postings on blogs are often awkward. You don't know me I don't know you but realistically, at least in the case of this blog, that doesn't really matter. This page isn't really about me or anyone else with two legs. This page is owned, run, and dominated by our two furry boys who crave attention in such an extraordinary way I am forced to forgo normal praise and tummy rubs for a cyber homage in their honor. I think of this as their own personal virutal dog run, and I am merely the PR manager on their digital campaign to spread their political agenda dealing with anti-grooming laws and their "Paws for Pizza" platform.

So Corky and Brulee would like to say hi to all and to remind you all that just because a Corgi is roughly the same size as an ottoman, they are not to be used as foot rests...ever. 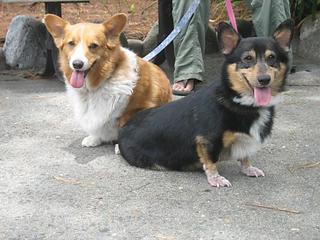 Comment by Charlie on February 1, 2008 at 10:59am
Welcome Mel, Ry, Corky and Brulee! Charlie would say "Aarrroooooo!" too, but he's too busy tearing chunks of skin off his new soccer ball. Looking forward to stories and pics from your crew!

Comment by Kristen on January 31, 2008 at 8:49pm
Welcome to you and the boys. Your Black-faced tri looks so much like my Lizzie. Glad to have you in Corgiville!

Comment by Avyon on January 31, 2008 at 8:13pm
Welcome to the neighborhood :) I just ordered some BBQ Chicken Pizza if you want a share lol.

Comment by Maribeth on January 31, 2008 at 12:23pm
We think that a redhead and a tri are the best possible combination of Corgis, already the best possible dogs!! And we're all for no grooming and pizza for everyone - you have our votes!

Comment by Kaydee's Corgis (Kim) on January 30, 2008 at 8:44pm
Corgi parents are definitely a breed all their own, and it is so fun to see everyones furry kids! Knowing that you are not alone in the Corgi craziness is a huge plus.
WELCOME!
Kim