My little Gibson is 20 weeks old now, and finally done w/his puppy vaccinations! Yay! Our vet appointment was last night, and he did so well. The last time we went (5 weeks ago), he was such a little jerk! He kept biting the vet. She had to bring in a 'handler' to give him his shots..and then that weekend he bit my mother-in-law when she was picking him up! It must have been a short phase though.. Since then we've passed obedience and he's been socialized a bit more.. This visit he was a sweet angel. He still did not like getting his temperature taken or being examined, but he just put his ears back and gave the vet and assistant kisses when they were done :) I realized then that his biting has been so much better lately. He used to nip everyone when he'd meet them to say hello, but now he kisses them. And yes, he bites our clothing a lot but never our skin..if anything he'll put his mouth up against our skin, but never bite down. For some reason it all clicked last night how well he's been doing. I really love my little guy (and he is really little..only 14 lbs. I thought he weighed a lot more!).

We also made his appointment to be neutered last night.. He'll be sans-balls on January 9th! I found out that they do bloodwork the night before and they have to spend the night though :( I'm already really anxious about this! I can't imagine how he's going to be. He is my magnet! He seriously cannot leave my side. If we go to the store and I run in and leave my husband and him in the car, Gibson will growl and cry and wonder where I went (this does not happen when my husband runs in and leaves us). He does the same thing when I leave the house. If I do not put him in his crate when I go out and do yard work, he'll always be sitting by the door that I went out of when I come back in (like 20 minutes later!). And he'll always follows me up the stairs when I go to the bathroom or take a shower. I've even been trying to give him some more freedom and leave him out of his crate when I get ready in the morning, but he always has to follow me up the stairs and nudge his way into the bathroom (kind of weird, kid). This morning he sat while I was in the shower with is paws on the side of the tub, and just sat there watching what I was doing. and then had to lick all the water and body butter off my legs when I got out.. It's weird! But I let him stay in there because I don't want him running around on our new carpet or bothering my sleeping husband. And I've tried taking him back down and putting him in his crate, but it does not seem to get through to him. Am I the cause of this clingy behavior? I'm wondering because my parents dogs have been the same way w/my mom..maybe it's the way we train them? Or maybe all dogs are like this...

The other thing I'm worried about w/leaving him overnight is that he's used to sleeping in bed w/us now. He's such a spoiled little dog. I love him being there though. I did, however, have to train him to not be my alarm clock. He got used to waking up at the same time every morning..so much that he started to wake me up 5-10 minutes before my alarm! grr. He did this by walking on top of me and licking my face..and this happend on weekends too. . Same time every morning. So I started to put him in his crate whenever he'd do this..no matter if it was a weekend, 20 minutes before my alarm went off or 1 minute before my alarm went off. Every time. He hasn't tried to wake me up in a week :) I even caught him one morning as he noticed me tossing around. He stood up and peeked around to see if I was awake..and then curled up and went back to sleep (or pretended to). So it looks like he caught on that mommy does not like to be disturbed when she's sleepy.

In shop news, I added a black headed tri, sable, fawn & two fluffy pembrokes, and a red & white, blue merle, black & white & brindle cardigan to the mix :) Tell me if you want to see any other variations! More to come! Corgi Butts Shop 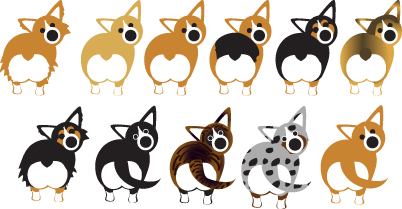 How funny. I've emailed you before because I've found your blog:P

Comment by Sarah on November 24, 2008 at 10:04am
Gibson sounds a lot like my dog Pancho. Pancho's 7 months now, but when he was getting his puppy shots he would get really tender at the injection site and i figured it out because he tried to bite me every time i tried to pick him up for a couple of days. Now he gets shots in a different place so i can lift him under the shoulder without causing discomfort. You might want to talk to your vet about changing where they inject Gibson.