Over the past few weeks she's had a growth spurt and is now almost as tall as Cassie. She weighed 21 pounds the other day, up from 16.

All of this came about after the vet and I made a little discovery: she's allergic to beef. Even as a tiny pup she looked a little wan around the eyes. Over time, her eyes took to running constantly. Vet thought it was an airborne allergy, and we were treating her with drops. More recently she developed ear redness and itchiness. Dr. Bracken suspected a sensitivity to beef (as it develops, beef is  among the most common allergens for dogs) or some kind of grain. So we took her off both: I put her on a grain-free turkey formula.

Within a week or ten days, the ears and the eyes cleared right up. And she started to gain weight and put on bone mass and height. I added a boiled egg at mid-day: her energy levels rose and her coat is glowing in the dark.

After two or three weeks of this, I happened to give her a rawhide chew --  normally we refrain from these, because I worry about the dogs choking on the things, but since she's still confined in whatever room I happen to inhabit so as to discourage defiling the living room floor, I can keep a sharp eye on her and steal it before she reduces it to gagging size. And…surprise! After a few days of chewing on beef rawhide, the runny eyes and the red ears came right back!

So at this point we're pretty sure the problem is beef.

It's interesting -- and mighty instructive -- to know that if a dog is allergic to X type of meat it can't be chewing on the dried, processed hide of X animal.

She hasn't gone back on a dog food that contains grain, but the brand I'm using does have a chicken with brown rice and a fish combo with brown rice. I may experiment with one of those to see if the rice has any effect.

This fancy dog food is extravagantly expensive -- you can get it at Whole Paycheck, not surprisingly. Fry's sells it for less, though. At any rate, since Ruby is doing so much better on it, I'm thinking that once Cassie finishes off the remaining supply of the old stuff, I may switch her over to it, too.

Just this minute, they're still engaged in their morning romp, which has gone on for quite awhile today. One dog sneaks up on the other, who pretends not to notice and then SPRINGS and they run around and around and around the yard like a couple of demented rabbits. It's very funny, and they get plenty of exercise doing that. We get about a mile of walking on the leash each day, and now that it's cooler, we've been able to push that up to two miles several times a week. The interminable surgeries have precluded my doing much else with Ruby, but at this point most of the time she's pretty good on a lead (not great, but unlikely to pull the human in front of an oncoming semi-truck) , she sits on command, she comes to call if she's in the mood or can be tricked into thinking there's a treat in it for her.

She has taught Cassie to chew on her favorite delicacy: mummified oranges fished out from under the trees. The human could do without this, but it doesn't seem to harm the dogs, and for sure Ruby is not allergic to the darn things.

The two dogs are getting along really well. The budding food competition stopped when I started making Ruby sit for her dinner, and also hooking her to a long leash tied to the oven door handle so she can't raid Cassie's food. They're now able to eat in the same room without incident. Cassie no longer runs away from her dish if Ruby so much as looks at her -- apparently dogs can figure out that if another dog is tied down, it can't come over and grab their food. Cassie is no longer crabby and irritable with Pup, and they're now back on the bed at night, with no threats that Ruby will be shoved onto the floor or (better yet!) eviscerated and left to bleed out all over the sheets. Although I think it probably would be safe to leave them together when I'm out, Ruby goes into her crate when the human goes out the door…just in case.

Below, a photo of the two little fruitcakes, with Ruby-Doo on the right. iPhoto has decided that i will not be allowed to use its red-eye or touch-up tools to fix the Hound of the Baskervilles effect…but you can see that there's NO runniness or sickly look around the eyes. The little bit of redness in one ear is, I believe, the aftermath of the rawhide episode --  it seems to be clearing up.

So it'll be interesting to see how things go. She certainly is thriving right now. Dogs develop allergies in the same way humans do: by overexposure to certain proteins. For some dogs, as for some humans, overexposure can mean not much exposure. So I'll be rotating the food flavors -- right now she's progressed to grain-free chicken -- by way of never keeping her on any one meat source for very long. 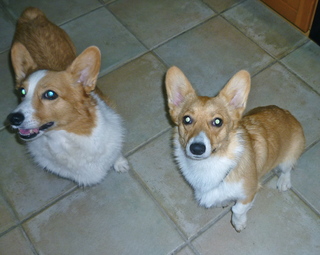 Thanks, Anna! I'll look for it.

Interesting about the beef allergy and also about the rawhide...  If you  try the lamb and rice of the same brand and it works, so you know rice is not a problem, I have used Avoderm Lamb and brown rice now for upwards of 15 years and all the dogs have done well on it.  I started using it when I had my Anatolian Shepherd in the mix, as she was allergic to most everything.... It may do the job at a more reasonable price.

I enjoy reading about how well Ruby is doing now.  It wasn't so long ago that you were about ready to throw in the towel.  Glad you didn't.  I hope your success inspires others.

The reaction you describe is exactly what Max has to airborne allergens...ragweed and leaf mold.  Since I can't eliminate those he is on Benadryl from mid August to our first hard freeze which is suppose to happen tonite.  As much as I hate the cold a hard freeze will make life better for both Max and myself.